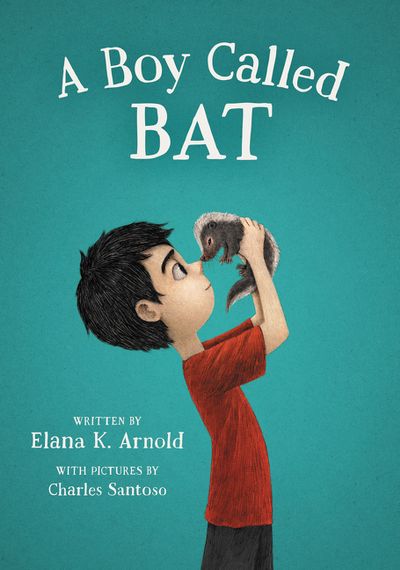 Bixby Alexander Tam’s initials spell Bat, but this isn’t the only reason his nickname has stuck. He has sensitive hearing (he often wears his sister’s earmuffs to muffle loud sounds) and sometimes his hands flap when he’s nervous or excited. Bat doesn’t mind his nickname—animals are his very favorite thing. When Bat’s mom, a veterinarian, brings home a baby skunk to care for until it’s old enough to be placed in a rescue center, Bat enthusiastically agrees it’s a “good-surprise” (most surprises aren’t). Bat loves this skunk more than anything; now, he just has to convince his mom that they belong together. Forever.

Apart from the summary of the book, which describes third-grader Bat as being on the autism spectrum, autism is never directly mentioned within the pages of the book. Rather than labeling Bat, Arnold allows the reader to experience Bat through his own words and actions, the words and actions of others, and the unique ways in which he navigates the world and people who surround him.

Relationships are at the heart of this middle grade novel and the reader is able to witness the complex ways in which Bat tries to make sense of how to engage in these relationships. Whether it is at one of his two homes or in the halls and classroom of his school, Bat is both subtly and sharply reminded of the ways in which he sees and approaches his interactions differently from his family, teachers and peers. At school, group projects are frustrating to Bat because no one seems to care as much as he does, when he states the obvious, his classmates get upset, and grown-ups are always laughing at things that Bat doesn’t think are funny. Most of the time, Bat feels he is misunderstood by most everyone.

At home, Bat’s big sister, Janie, both teases and offers curt reminders about how to be in the world and interacting socially. Yet this sibling relationship also offers some of the most tender and insightful moments of the story:

Bat loved braiding Janie’s hair, even though he usually wasn’t very good at hand things. He liked the feeling of the damp, heavy hair; he liked organizing it into a series of smaller, neatly contained braids; he liked feeling close to Janie like this, by helping her and touching her, without having to have a big conversation that might turn into a fight. Getting along with people was hard for Bat. Figuring out what they meant when they said something, or when they made certain faces at him…People were complicated. But braiding was easy (p. 153).

Not only does Arnold allow her readers into Bat’s thought processes that accompany his day-to-day interactions, she also expertly captures the nuanced responses from others toward Bat–the sigh of an adult, the eye roll of a sibling, the unanticipated confusion of a peer. With these nuanced descriptions, she provides multiple sides to every interaction, and as a result, allows any reader–child, parent, teacher, fellow animal lover–to find a point of connection with Bat and to understand how their own words, actions and reactions might be seen by him.

Bat’s love for and budding relationship with a young skunk provides a new way of connecting with others. Helpless and completely reliant on his human family, tiny Thor creates a safe space in which Bat can explore his emotions while also learning how to share and communicate these with others. Whether it is emailing a national skunk expert for advice or beginning a new friendship with a classmate, Thor provides a common ground, a jumping off place, a way of finding structure and control within the messiness and often confusing interactions of the human kind.

Unlike many books featuring characters with autism, Arnold has not written a book about autism. Instead, she has introduced her readers to a third-grade boy named Bat, who loves animals, vanilla yogurt and the candy shop that has jelly beans arranged by color, offering rich and multiple entry points to which readers can connect. A first inclination may be to pair this book with other books featuring autistic characters. Instead, the following middle grade books feature characters who often feel misunderstood and puzzle at the ways in which other people move through the world differently than then do–Lola Levine is Not Mean (and others in this series) by Monica Brown, Hello, Universe by Erin Entrada Kelly, and Insignificant Events in the Life of a Cactus by Dusti Bowling.

Like Bat, Arnold is an animal lover and likes to say that she writes books for kids and books about teens. In addition to Bat and the Waiting Game, the second book in the Bat series, she is also the author of several books for young adults, including Infandous, the National Book Award finalist, What Girls are Made Of, and the forthcoming Damsel.