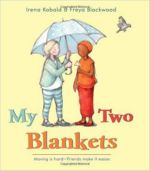 My new blanket grew just as warm and soft and comfortable as my old blanket. (p. 27).

This picture book recently secured a spot on USBBY’s 2016 Outstanding International Books list, which comes as no surprise. Told through poetic verse with simple yet vivid language, the story of Cartwheel, a young girl—presumably a refugee from an African nation—chronicles her move to a strange and distant world where the language is like a rough blanket. Kobald’s descriptive language positions readers in such a way that they can imagine what it feels like to be separated from all that one has ever known.

Every night Cartwheel returns home to her blanket, which represents the only place she feels secure. While feeling so alone in her strange new world, however, she is eventually befriended by another, who is determined to help this newest arrival understand the meanings of the strange words in Cartwheel’s new location. Through these encounters, Cartwheel begins to feel more at home.

Freya Blackwood’s illustrations are beautiful, colorful sketches that bring the text to life. The illustrations enhance the narrative, and both written text and illustration play a critical role in bringing this moving story to life. The imagery adds to the reader’s understanding of what it must feel like to be an immigrant to a new land, and what the blossoming relationship looks like between the girls within the story. The depiction of the two blankets is particularly crucial in demonstrating the intricate weaving and delicate process it takes to be yourself in a new world.

My Two Blankets is an exemplary book to show young students the pairing of narrative and illustration as well as compassion and friendship. Students in first through fourth grade would enjoy this text, but deeper understandings and themes present in the text make it appropriate for older students as well.

This picture book would pair well with The Lion and the Bird by Marianne Dubuc (2014) and Arto’s Big Move by Monica Arnaldo (2014) as both present children in unfamiliar surroundings building friendships. With older students, My Two Blankets could be used as a metaphor for introducing The Secret Side of Empty by Maria Andreu (2014), a young adult novel that presents a young girl’s challenges in trying to find her place within the US.

Irena Kobald is from Australia, and while careful to not distinguish the geographical location of the book, she explains in the author note that the book was inspired by her daughter’s relationship with a Sudanese child and she is an immigrant herself. Winner of the 2015 CBCA Award, this is the only picture book available by Kobald in the United States.

Blackwood is an award-winning illustrator who has illustrated many other children’s books including the award-winning Harry and Hopper (Margaret Wild, 2011), Half a World Away (Libby Gleeson, 2007), and Banjo and Ruby Red (Libby Gleeson, 2015). She wrote and illustrated Ivy Loves to Give (2010). Prior to her illustrating career, Blackwood worked as an effects technician in the making of “The Lord of the Rings” trilogy. More about Blackwood can be found on her website.

WOW Review, Volume VIII, Issue 3 by World of Words is licensed under a Creative Commons Attribution-NonCommercial-ShareAlike 4.0 International License. Based on work at https://wowlit.org/on-line-publications/review/volumeviii-3/