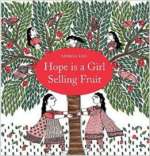 Some things are given, but it is a question of how life changes and how we walk into the future—I’m unsure, but unafraid, and I have some hope (np).

A visual journey into the Mithila traditional folk art of North India, this autobiographical narrative reveals smaller stories within each of the book’s illustrations. Amrita Das tells of her own venturing out to become an artist and discovering, within observations of a young girl traveling to Chennai on the same train, a story that reflects the promise for many women in everyday situations who fulfill their own hopes through choices as simple as selling fruit near the train station. Translated from the Hindi original, “the text is gentle, but it is also resolute: unflinching in the way it looks at the confines of women’s lives, and persistent in its search for choices” (Gita Wolf, 2013).

As Amrita’s personal story unfolds through her observations of those around her, readers acknowledge philosophical insights that are universal in nature. Notions about the difficulty of girls’ lives, their freedom or lack thereof, and personal pride in spite of poverty. Contemporary issues are revealed in both illustration and text – both employing metaphors to share the life of an Indian woman.

Mithila art, or Madhubani paintings, originated in rural communities with each community having distinctive variations. Originally painted on walls and floors of homes, the traditional designs and symbols have become a voice for contemporary issues. The detailed, patterned pictures are created with natural dyes and instruments such as twigs and brushes. Used for ceremonies, festivals, and other major life events, the pictures consist of geometric patterns within which figures and objects tell stories or carry themes. Hope is a Girl Selling Fruit is comprised of twelve illustrations that are autobiographical in nature. Positioned in the center of each two-page spread, each image is a carefully constructed composition. Brief text is positioned on the outside margins. Final pages include a note from Gita Wolf of Tara Books in which she provides further information regarding the author, Amrita Das. A final two page spread features all 12 images in a display of the illustrations side-by-side.

Books that might be paired with this one include The London Jungle Book by Bhajju Shyam (2014), I Saw a Peacock with a Fiery Tale by Ramsingh Urveti (2012), and The Enduring Ark by Joydeb Chitraker (2013). In each of these, the artist depends upon ancient, traditional art to convey the theme of the story.

Amrita Das is a young artist whose work frequently uses a theme of female freedom and choice. Her own autobiography reveals this theme as well. She strives for authenticity in her art as revealed at the beginning of the book where she creates a picture of her childhood only to state that her childhood was far from idyllic as perceived in her images. Her personal insights of the lives of many females in India is also considered realistic in contemporary society.

WOW Review, Volume VIII, Issue 3 by World of Words is licensed under a Creative Commons Attribution-NonCommercial-ShareAlike 4.0 International License. Based on work at https://wowlit.org/on-line-publications/review/volumeviii-3/