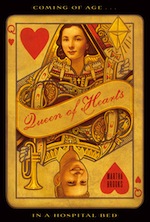 Set in Manitoba, Canada during World War II, Queen of Hearts is the first person narrative of Marie-Claire, a French-Canadian farm girl who spends her adolescence in a tuberculosis sanatorium. When Oncle Gérard comes to visit, the family assumes his broken health is the result of a drunken life. After staying with the family for a few months it is discovered that he has, in fact, a very advanced case of TB, which has spread to Marie-Claire and her younger siblings, Luc and Josée. The three children are placed in a sanatorium to recover.

For Marie-Claire, who has recently experienced her first kiss, this separation from her family is an opportunity to explore love and friendships, as well as a time to learn how to go on living with loss and grief. This is a potent brew, especially when combined with fighting TB, literally fighting for life.

True to the “sick lit” genre (a particular form of YA novels that focuses on teenage girls facing terrible diseases and developing friendships as a means of coping), the text revolves around Marie-Claire’s friendship with her roommate, Signy, a very ill girl who is also very much alone. Through Signy, Marie-Claire confronts her own demons and her own life. A novel about illness, this is also a book about the resilience of family, forgiveness, and, ultimately, the difficult and dangerous feat of growing up.

Martha Brooks is a famous, award-winning young adult author in Canada who sets her stories in her home country. In the preface to the novel, Brooks explains that much of the story is based on her own experiences living in a TB sanatorium in Manitoba due to her parents’ jobs. The author is writing about her own culture based on historical and personal experience.

The question that permeates is what makes this novel particularly Canadian, barring its setting. This is a tricky question to answer as Canadian culture seems, on the outside, to be very similar to U.S. culture. The only surface difference was a couple of French phrases and French names. To find out more about what Canadian culture is, according to Canadians, I did a web search and found an informative article from The Globe and Mail (http://www.theglobeandmail.com/archives/article801204.ece). The author of the article interviewed Canadians and found the following, “So that’s Canadian culture; it doesn’t exist, it’s regional, and it’s multicultural or any combination of the three. In many ways it’s all of those things. It is a complex culture, shaped by all the cultures that form it. Maybe it’s this complexity that causes it to defy definition. Or maybe its complexity is its definition” (S. Phipps, 2009).

In the case of Queen of Hearts, the setting is rural and on the prairie so this is the Canada that is portrayed. The characters are hard-working, the land is inhospitable, and farming is a dicey business. While the protagonist’s family is of French stock, the reader is not sure if the family speaks French within the family, but it is clear in Marie-Claire’s friendship with Signy, whose family is from Iceland, that she has no problem communicating with her roommate.

As an American reading this novel, I was struck by the egalitarian nature of the sanatorium as both rich and poor suffered together. Additionally impressive was the fact that Marie-Claire’s family members were able to maintain their dignity despite not having the money to pay for their three children to heal.

For greater insight to the Canadian culture as revealed in its literature for young adults, Queen of Hearts could be part of a text set that includes Half Brother (Kenneth Opel, 2011), a realistic fiction text set in 1970 Victoria that reveals concerns and interests around the scientific use of animals; The Night Wanderer: A Native Gothic Novel (Drew Hayden Taylor, 2007), a supernatural romance written by a Native Canadian that is set on a First Nations Reservation; and Rough Magic (Caryl Mullin, 2010), a fantasy novel uniquely retelling Shakespeare’s The Tempest.

WOW Review, Volume IV, Issue 3 by World of Words is licensed under a Creative Commons Attribution-NonCommercial-ShareAlike 4.0 International License. Based on work at https://wowlit.org/on-line-publications/review/iv-3/