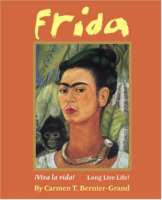 Twenty-six lyrical free-verse poems, arranged in chronological order, outline the life of the most famous Mexican female artist – Frida Kahlo. The poems are of significant events in Kahlo’s life, including her childhood relationships with her parents and grandparents, her struggle with polio, her terrible bus accident and numerous operations, and her stormy relationship with muralist Diego Rivera along with infidelities, miscarriages, divorce and remarriage. Except for the last poem, which reports on Kahlo’s death, the poems are written in the first-person voice and are accompanied by Kahlo’s own paintings. Descriptive captions are provided underneath each painting, and they reveal additional information of Kahlo’s life events.

Many of the poems deal with pain, both physical and mental. Through Bernier-Grand’s words, we feel Kahlo’s hurt and despair. However, we can also see the optimistic side of Kahlo between the lines–she loved and embraced life, she painted to make meaning, she was interested in the world around her, and she took social action when there was injustice. The poems convey a rather impressionistic perspective on Kahlo’s life rather than a comprehensive one.

The book received a 2008 Pura Belpré Honor Book for writing. Carmen T. Bernier-Grand grew up in Puerto Rico and came to the United States at the age of 27. She has lived in Portland, Oregon for more than 27 years. Most of her books are related to her ethnic and cultural background, and many of her stories are of Puerto Rican folktales. She expressed her uneasiness in an interview about writing her books in English, her second language. Frida: ¡Viva la vida! Long Live Life!, was particularly challenging for her because it is a book of poems. She claims: “I can write in Spanish, but most of my books are in English. It takes me longer than it might take a native English speaker” (http://www.carmenberniergrand.com/). Her other books dealing with Mexican culture include, Our Lady of Guadalupe (2012), César: ¡Si, Se Puede! Yes We Can! (2011), and Diego: Bigger than Life (2009), Bernier-Grand has remarked that she was apprehensive at first to talk about these icons in Mexican culture because she herself was not Mexican. But after exhaustive research, the subject grabbed her heart and she was comfortable enough to write. Frida is an important icon in Mexican culture but she also resonates with other groups as well, such as Chicanos, feminists, political activists and lastly the artistic community. Her life experiences were varied and her story is compelling for so many. Because of this, Bernier-Grand had to make sure she was writing a book that rang true for many different people.

When asked to give advice for writers who are interested in retellings, Bernier-Grand responded: “My advice is not just for the re-tellers but for everyone. Make sure you’re telling your story with accuracy and respect. Even if it is your own culture, check the facts. Don’t rely on your memory. Tell the truth. Write an author’s note saying what you made up and what you didn’t. Tell the readers about your sources. If you don’t have passion for the story, don’t write it. Because then your lack of research will show” (http://www.cynthialeitichsmith.com/lit_resources/authors/interviews/CarmenTBernierGrand.html). She practiced her own beliefs in writing this book on Frida Kahlo by including appended quotes from Kahlo’s letters and diary, a prose biography, a chronology of events in Kahlo’s life, a glossary of Spanish words used in the poems and books, movies, documentaries, and websites that she researched for information.

Bernier-Grand appears to be a careful honest writer who is passionate about her craft. Her books offer the reader a stylized rendering of stories and knowledge that seem fitting to the subject matter. Carmen T. Bernier-Grand has given young readers a glimpse into the tragic but nevertheless full of life story of Frida that not only illuminates her art, her words and life but her strength of spirit as well.

WOW Review, Volume V, Issue 3 by Worlds of Words is licensed under a Creative Commons Attribution-NonCommercial-ShareAlike 4.0 International License. Based on work at https://wowlit.org/on-line-publications/review/v-3/