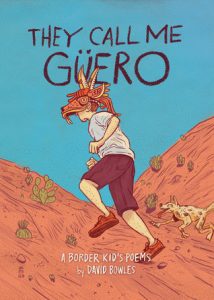 Poetry is the clearest lens for viewing the world (p. 33).

In Spanish, the nickname Güero refers to someone of Mexican or Latin American descent who is light-skinned, with blonde or red hair. In They Call Me Güero: A Border Kid’s Poems, author David Bowles tells the story of life on the border in South Texas, through the eyes of a Mexican-American seventh grader. An avid reader from a young age, the nerdy, freckled-face main character struggles to fit in. He looks more like a gringo than the rest of his family, but he is proud of his heritage. He wishes he were dark like the rest, but as his father tells him, his appearance will someday give him opportunities not afforded to his brown-skinned parents and grandparents.

Through school, Güero has found his posse of like-minded nerdy kids (Los Bobbys), and is excited about the new school year. He has also begun to find his voice. One of his heroes, an English teacher named Ms. Wong, encourages multicultural reading in her class. He is excited to read stories from other countries, including lyrics of Aztec origin. It is through this class that Ms. Wong introduces Güero to poetry. At last, through poetry, he is able to say all the things he has wanted to say, as his “soul comes rushing out in line after line” (p. 34).

Each poem in They Call Me Güero is beautifully written, cleverly depicting some aspect of present-day life for Mexican-Americans near the border. In some cases, Bowles writes of the struggles for Latinx people in the U.S. For example, the characters experience verbal abuse from opposing fans of a mostly white school in “Playoff Game” and racial profiling by officers on their way to Six Flags in “Checkpoint.” In “The Newcomer,” Güero befriends a shy boy fresh from Honduras, whose family endured hardship as they made their way to the United States on “la Bestia,” one of a series of cargo trains that runs north through Mexico.

Not all of the poems deal with hardship.  Many of the poems are light-hearted and fun, describing the simple joys he finds in his culture and love for his family.  In “Cascaron War,” the family engages in an Easter egg hunt, where confetti-filled eggs are broken over the participants in a friendly battle. For his sister “Teresa’s Quinceanera Waltz,” Güero is proud to be asked to play the accordion with the band and gets her approval through her “beaming” smile (p. 103).

This book is great reading for all ages, but middle school students, especially those in Mexican-American families, will particularly enjoy this book. The short stories depict life for Latinx people in a real, honest way.  Students can connect to the stories of struggle and fears of growing up in that culture, but can also find hope and joy through the everyday experiences of Güero.

This book has already won several awards, including being named a Pura Belpré Honor Book, and earning the 2019 Tomás Rivera Mexican American Children’s Book Award. In keeping with the Latin American theme, students may also find interest in Bowles’ other works, such as Flower, Song, Dance: Aztec and Mayan Poetry (2016). Students may also connect to another recommended book, Merci Suárez Changes Gears by Meg Medina (2018), which relates to Latinx youth experiences in the U.S.

David Bowles is a Mexican-American author, and has written approximately a dozen books, most of which speak to his heritage.  Originally from South Texas, he currently serves as an assistant professor at the University of Texas Rio Grande Valley. Find more information about the author, as well as more of his works, at https://davidbowles.us.