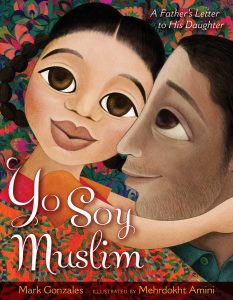 Yo Soy Muslim is a truly beautiful and inspiring letter, written primarily in English, by a father to his young daughter. Author Mark Gonzales uses seemingly simple language to address very important questions and concerns that surround (or will surround) not just his child, but any multiethnic human living in this modern time. The letter begins with brief references to old sayings and reminders to tie his daughter’s day-to-day experiences to not so distant cultural anchors. The poetic way in which he advises her to “walk in the steel shadows, remembering Mayan Pyramids that too lived amongst the heavens” pairs perfectly with the illustration of dark foreboding skyscrapers surrounding the young girl and her father. The imagery helps the reader to feel how scary and lonely a culturally detached city may seem. Yet, the words, said with confidence and love, allow the young child to walk bravely amidst these scary, shadowy streets, re-assured by her father’s hand holding on to hers.

The letter then moves on to a future time in which deep questions will be asked by her, and of her, “…who invented my hands? Why wasn’t I born with wings? And does the moon ever get lonely?” These questions, he tells her, are the types of questions asked when learning “what it means to be human.” Again, the text is beautifully illustrated with the father-daughter pair flying over a peaceful moonlit countryside, the young girl’s hand reaching out in front of her. This part of the book is simultaneously profound and sad. One gets the feeling the father is perhaps worried he will not be at her side when she is confronted by people who “will not smile at [her]”. His words have a gentle urgency as he anticipates the accusing types of questions his young daughter may hear from others, “What are you? And where are you from?” The author is preparing his child and the reader for how to respond to judgmental looks or actions. One does not have to be Muslim or Latinx to experience these types of questions. Anyone considered “other” or somehow “different” can relate to being singled out and confronted in such a manner. It is these premonitory scenarios that compel the author to gift his daughter with proud and soulful answers drawn from her very own cultural, religious, and linguistic essence, her identity!

On that day tell them this: Yo soy Muslim. I am from Allah, angels, and a place almost as old as time. I speak Spanish, Arabic, and dreams.

These words are so beautifully powerful and relatable, that anyone with a diverse cultural or ethnic background is able to hear and feel the author’s message, to proudly (re)claim their identity. He strengthens the message by offering additional powerful statements of being here since the beginning and continuing to be here into the future. The words are meant to be said out loud, proclaimed as it were, over and over as necessary and without shame. The affirmations are meant to bind his daughter, and the reader, to past, present, and future, allowing us all to become “ancestors in training.”

Mark Gonzales began to tell stories and ultimately wrote this book to provide a living voice for those who have been silenced or misrepresented by others. As a Mexican-American Muslim, he has experienced discrimination and marginalization because of those “tags” and not fitting in to a preconceived mold. The current socio-political climate has further “demonized” being Muslim or of Hispanic descent. The book serves as a beacon of light against dark stereotypes. It heals and nurtures identities and souls.

Other books that have similar messages of positive identity are Mommy’s Khimar by Jamilah Thompkins-Bigelow (2018), Mixed Me by Taye Diggs (2015), Marisol McDonald Doesn’t Match/Marisol McDonald no combina by Monica Brown (2011), and The Name Jar by Yangsook Choi (2001).

Mark Gonzales is a self-described futurist who is dedicated to changing the narrative of people of color. He was born in Alaska and has traveled all over the world, currently living in California with his family. Gonzales wants to ensure he provides positive and influential reflections of people of color. More information is available at http://www.narrativegrowth.com/ about Mehrdokht Amini is an Iranian illustrator who now lives in England. She has vividly and beautifully illustrated many children’s books like Golden Domes and Silver Lanterns (2015), Chicken in the Kitchen (2017), and A Moon for Moe and Mo (2018). More information is available at http://childrensillustrators.com/mehrdokht1976/portfolio.

WOW Review, Volume XII, Issue 1 by Worlds of Words is licensed under a Creative Commons Attribution-NonCommercial-ShareAlike 4.0 International License. Based on work at https://wowlit.org/on-line-publications/review/xii-1/