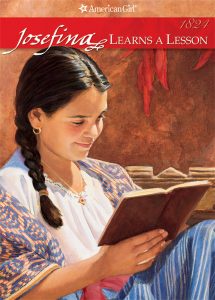 When we can read this book, it will be like hearing Mamá’s voice. And when we can write, we can add things we remember her saying. This book will be a place to keep her words safe forever. (p. 59)

Josefina Learns a Lesson is historical fiction, set in 1824 before the Mexican American War (1846-1848) when New Mexico was not yet part of the United States. María Josefina Montoya (henceforth, Josefina) is the main character, nine-years old and the youngest of four daughters. Her mother passed away the previous year and Josefina and her three older sisters endeavor to run the household the way they learned from their Mamá. Josefina’s aunt Tía Dolores, Mamá’s sister from Mexico City, agrees to live with Josefina’s family on the ranch for a while to help and teach them as Mamá had done. Tía Dolores provides problem solving skills and even discusses business, talking with Josefina’s father about how to increase the flock of sheep by trading blankets. The family begins a weaving business to obtain sheep, and Josefina greatly admires the changes Tía Dolores brings to the household. However, Francisca, Josefina’s older sister, disagrees because she dislikes their aunt’s new changes. One evening, Tía Dolores tells Josefina’s Papá that she will teach his daughters how to read and write, which excites Josefina. In the middle of the night, however, Josefina’s enthusiasm turns into a moral dilemma when she engages in a conversation with Francisca, who is weeping. Francisca is opposed to learning how to read and write from Tía Dolores, because she believes it is another method their aunt will use to make them forget Mamá. Josefina is conflicted and wonders if it would be ethical to follow her aunt’s ways and learn how to read and write because she does not wish to be disloyal to her Mamá who did not read or write.

Josefina becomes concerned and wonders if she should adhere to the traditions like Mamá or accept the new cultural changes by taking her aunt’s reading and writing lessons. Josefina is afraid of losing Mamá from her own memory when she is unable to remember some of the lines from her mother’s favorite poem. Josefina soon finds relief when she realizes that memories of her Mamá live in a book that Tía Dolores has created which preserves Mamá’s words, funny sayings, poems, songs, stories, and prayers as writings. Josefina acknowledges the importance of how reading and writing will help her feel close to her mother and successfully persuades Francisca by showing her the book made by their aunt. The story ends with Tía Dolores writing Josefina’s name to show her nieces how it is written in letters with flourishes.

The striking features of this book are that both text and illustrations transport readers into Josefina’s world, so that they understand what her life was like in 1824. The colorful illustrations present the food, clothing, and lifestyle of Josefina and her family during this time. The text also provides excellent details and is very informative and supportive of the illustrations. The dialogue is rich; for example, Tía Dolores says, “Reading is a way to hold on to the past, to travel to places you’ve never been, and to learn about worlds beyond your own time or experience” (p. 57). Additionally, the illustrations and text describe each characters’ psychological state such as excitement, fear, sadness, and joy quite vividly. Spanish words are included in the text which adds authenticity, and there is a glossary at the end of the book which functions as a Spanish-English dictionary.

Josefina Learns a Lesson contains a section titled “Looking Back 1824: A Peek into the Past,” which provides information on school and education with images from museums and universities. These add cultural authenticity and historical accuracy to the story and illustrations.This book is appropriate for children to learn about the history of New Mexico and simple Spanish words. Educators can have students engage in discussions about literacy across cultures. Students can share their thoughts about cultural changes in family traditions and differences in customs between families. Additionally, learners can make comparisons of how people live in the world today with digital devices and new technologies along with ways to record history and past events to preserve them for the future.

Josefina Aprende Una Lección is the Spanish edition published by The Hampton-Brown Company and translated by José Moreno (1997). The first book in the series, Meet Josefina (Valerie Tripp, 1997) and its Spanish edition Así Es Josefina (translated by José Moreno,1997) could also be incorporated in classrooms for bilingual education and biliteracy. The Glowing Heart: A Josefina Mystery (Valerie Tripp, 2016) is an excellent addition for readers who want to join Josefina for more adventures in New Mexico. The author of Josefina Learns a Lesson, Valerie Tripp was born in Mt. Kisco, New York. In 1973, she graduated from Yale University, majoring in Philosophy. In 1981, she graduated from Harvard University with a Master’s degree in education. Currently, she lives with her husband, Michael, and their daughter, Katherine, in Silver Spring, Maryland. Valerie Tripp stated that she loves words and that writing is a way of talking on paper.

The author of Josefina Learns A Lesson, Valerie Tripp was born in Mt. Kisco, New York. In 1973, she graduated from Yale University, majoring in Philosophy. In 1981, she graduated from Harvard University with a Master’s degree in education. Currently, she lives with her husband, Michael, and their daughter, Katherine, in Silver Spring, Maryland. Valerie Tripp stated that she loves words and that writing is a way of talking on paper.

The illustrator, Jean-Paul Tibbles, was born in 1958 in Aylesbury, Buckinghamshire and currently lives in England with his wife, two daughters, and three cats. He stated that he enjoyed visiting Santa Fe, New Mexico, and getting a feel for Josefina’s 1824 world. Susan McAliley is an illustrator who received her Associates Degree in Commercial Art from Madison Area Technical College. Currently, she lives in the Seattle area.