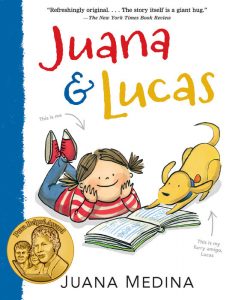 This illustrated chapter book is about a young girl named Juana, who lives in Bogotá, Columbia. Juana loves many things, including living in Bogotá, drawing, reading, and her dog, Lucas. She does not, however, love learning English, which she is supposed to do in school. Through the voice of Juana, we follow her through her day-to-day activities of going to school and visiting relatives, all the while trying to avoid the challenges of learning a new language. Juana seeks out the opinion of trusted adults, asking if they think learning English is worthwhile, assuming that they will agree with her that it isn’t. One by one they tell her how they think learning English is beneficial and give their reasons why. But Juana just doesn’t understand.

When parent-teacher conference day comes, Juana is terrified because she knows her mother will learn that she isn’t doing well in school, especially in learning English. Her grandparents pick her up from school that day so her mom can attend the conference. Juana shares with her grandfather “Abue” how much she dislikes learning English and how challenging it is. He listens to her and shares that he loves English, how it has been an important tool for him, especially in his profession as a neurosurgeon. Abue tells Juana that he is taking her to Spaceland, the amusement park of her dreams, and that she will need to know and use English. That is the motivation that Juana needs to start studying English more diligently! She does a complete turnaround in her thinking and starts diligently practicing her English. Juana goes on the trip to Spaceland and speaks to Astroman in English, her favorite action hero, however she’s disappointed that he doesn’t speak back to her. She feels like it was a waste of time to learn English, but as she thinks back on her adventure, she realizes that she loves traveling and knowing English has helped her make new friends.

The book has a colorful mix of page layouts, font sizes, and formats. These elements combined with whimsical illustrations by Medina give the book a dynamic and interesting rhythm. It’s written in English, with some Spanish words mixed in.

English Language Learners (ELL) can identify with Juana’s honest feelings about the challenge of learning a new language and her depictions of aspects of English that don’t make sense to her, like homophones and homonyms. In addition, Juana’s thoughts and feelings could relate to any subject or new material that readers find challenging. Juana’s examples might be specific to learning English, but the challenges and themes of not understanding why something is different, or why we need to learn things that are seemingly without use to us, are universal.

The story points out the benefits of learning English (as well as other languages), but it does so in a way that does not discount the importance of the native language. Juana appreciates her hometown, country, and language significantly, and at the end of the story she hasn’t lost that pride. This is important because the loss of language can be equated with the loss of culture and identity. Juana is excited to learn more languages and travel to other countries and experience their cultures. She has not forgotten her identity, nor has it been diminished; it has been enriched by her travel experience.

Juana & Lucas portrays adults in a respectable, non-stereotypical fashion. Juana is raised by a single mother, a strong woman whose husband died in a fire when Juana was little. Juana’s relatives hold a variety of interesting jobs. Her grandfather is a neurosurgeon and her more artistic aunt is a potter. Having this book available for ELL students gives an example of a Spanish-speaking main character whose family members are educated and hold prestigious careers, and shows that those outcomes are available to them as well. Readers see a wide variety of races and cultures throughout the book in the illustrations and descriptions of characters. Friendship across cultures is an important theme that is subtly conveyed by this book.

Books that might be paired with Juana & Lucas in read alouds, literature circles, or self-selection/library include Sofia Martinez: My Family Adventure by Jacqueline Jules and Kim Smith (2015); Unusual Chickens for the Exceptional Poultry Farmer by Kelly Jones and Katie Kath (2015); Dory Fantasmagory by Abby Hanlon (2015); Meet Yasmin! by Saadia Faruqi and Hatem Aly (2018); Sam the Man & the Rutabaga Plan by Frances O’Roark Dowell and Amy June Bates (2018); Absolutely Alfie and the Furry, Purry, Secret by Sally Warner and Shearry Malone (2017); and Spunky Tells All by Ann Cameron and Lauren Castillo (2011).

Juana Medina was born and raised in Bogotá, Columbia, and came to the U.S. to study at the Rhode Island School of Design (RISD). With a background in art and design, Medina began her career in children’s literature as an illustrator, creating the images in many children’s books including Smick! by Doreen Cronan (2015). Juana & Lucas, written and illustrated by Medina, won many prestigious awards, including ALA Notable Children’s Book, the Pura Belpré Medal, and ILA Notable Book for a Global Society. Medina currently resides in Washington, D. C. and teaches at George Washington University.

Tracy Krause, The University of Texas at Arlington