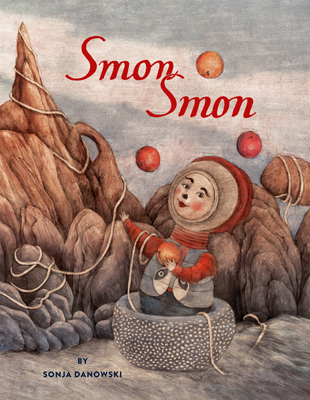 If you’re looking for a book that uses language with which you are familiar, this is not the book for you. There is, however, a deeper language at play in this picturebook that would be of interest to any reader looking for a book that portrays a more cosmopolitan sentiment in respect to Others, to loving the planet and all its inhabitants. If so, then welcome to Smon, Smon, a book that encourages such thinking, and would make a wonderful entrée into how mutual responsibility and cooperation can make a community, a region, and perhaps even the world, a better place.

Batchelder Honor recipient and author of Little Night Cat (2016) and Grandma Lives in a Perfume Village (2015), Sonja Danowski once again gives readers a rich visual feast in Smon, Smon. Rendered in pen, ink, and watercolor drawings, this picturebook uses a universal language, obviously made up by Danowski, that translates to any reader the story of a journey into a place where cooperation and friendship across language and cultural groups rescue an individual who needs help and create an entire geocultural space. A fantastical, mysterious, and gender-neutral world, the planet Gon Gon (a planet on which perhaps we all wish we could live) is the home of the Smon Smon. Life consists of the daily chores of hanging ron rons next to Smon Smon’s won won, which resides on a lon lon. After finishing that task, the Smon Smon floats away on its ton ton to where the lon lons and ron rons grow. As the story progresses, the planet Gon Gon seems to be a place where the inhabitants are protectors of other species as well as a place in which the inhabitants work cooperatively across species for the betterment of all, regardless of particular cultural traditions and ways of being in a peaceful world.

There is more to the story, but readers are invited to do their own explorations and use their own imaginations to travel through the world of the Smon Smons and their neighbors the Klon Klons. This is a rich book that is more deeply philosophical than its rhyming prose reveals on the surface. Many readers will want to take that deep philosophical dive and perhaps even play with a bit of language themselves. The book creates an open invitation to discuss languages across the globe and the concept that even if the language is not ours, the sentiments behind them probably are.

Books that would complement the theme of kindness in Smon, Smon include I Walk with Vanessa: A Simple Story about Kindness by Keroscoët (2018), The Big Umbrella by Amy June Bates and illustrated by Juniper Bates (2018), All Are Welcome by Alexandra Penfold and illustrated by Suzanne Kaufmann (2018), and The Day You Begin by Jacqueline Woodson and illustrated by Rafael López (2018). Books by Danowski would make an interesting unit on visual style and illustration, while older readers might find the cosmopolitan sensibility within the book a way to look more closely at current sociopolitical rhetoric that often closes the door on acts of kindness, openness to the Other, and languages other than the dominant.

Sonja Danowski was born in Germany and currently lives in Berlin. She studied design in Nuremberg and currently works as an artist as well as an author and illustrator of picturebooks. She does not limit her work to children, suggesting that her work is for both children and adults. She has received numerous awards and has displayed her work across the world at numerous exhibitions. She has illustrated books for authors across the world including Mountain Goats (2017) by Cao Wenxuan (China), The Beginning (2012) by Paula Caballeira Cabana (Spain), and The Forever Flowers by Michael J. Rosen (USA). Her work, Excursion Flora (n.d.), which can be found at her website, is a wonder.

WOW Review, Volume XII, Issue 3 by World of Words is licensed under a Creative Commons Attribution-NonCommercial-ShareAlike 4.0 International License. Based on work at https://wowlit.org/on-line-publications/review/xii-3/