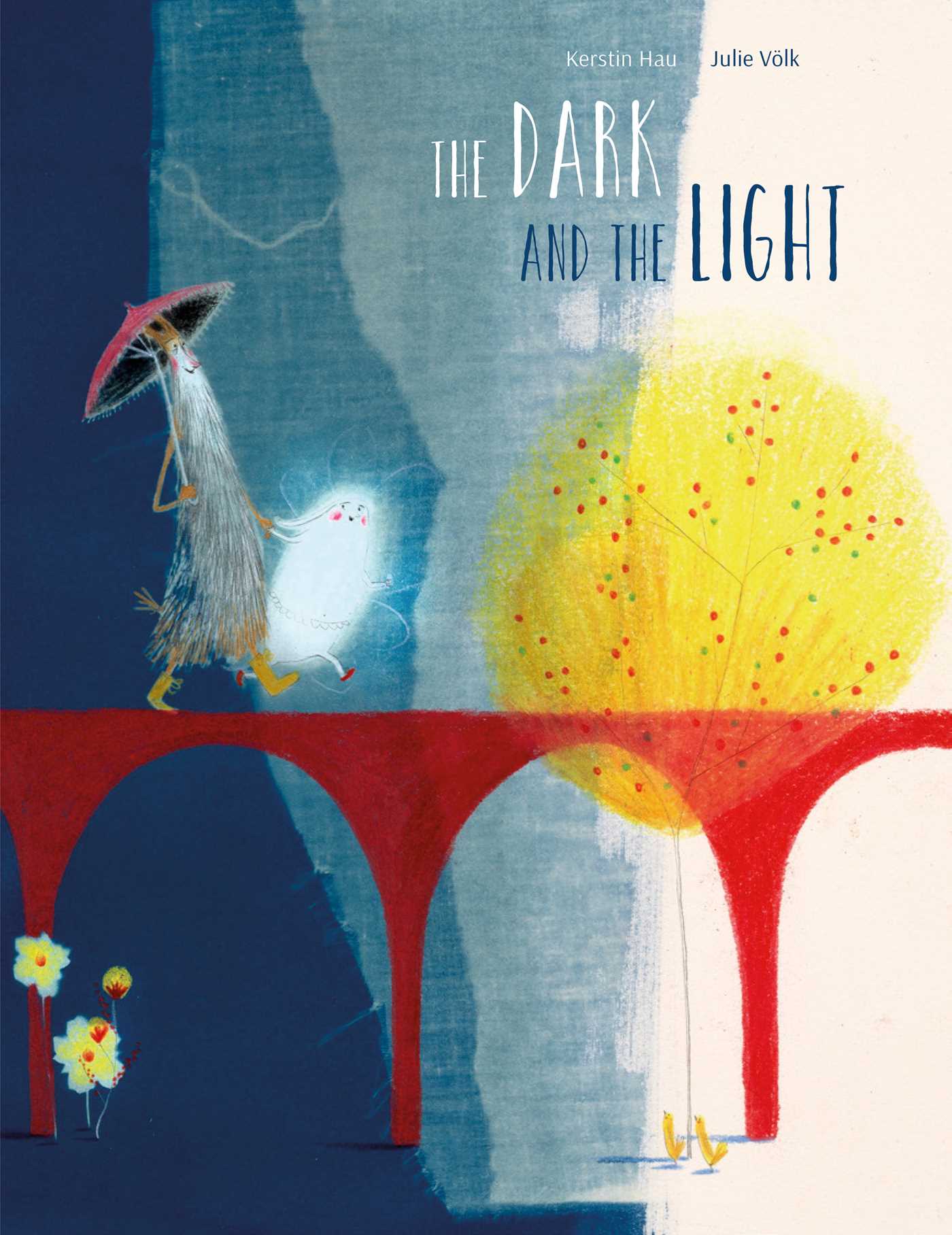 Shaggy lives in the land of darkness. Sparkle lives in the land of light. Both creatures are lonely but one day they see each other across the shaded border between the dark and the light. Frightened, Sparkle runs away, but she ventures close to the border the next day and gets up the courage to respond to Shaggy’s overtures of friendship. Eventually, through conversation in the borderland between dark and light, they become friends and visit each other’s homes. Shaggy comes with a parasol and Sparkle with a flashlight. One day Shaggy goes to visit his friend Sparkle’s home and it has disappeared! Distraught, he returns to his home in the land of the dark and finds to his surprise, that Sparkle is there. Together they decide that life as friends helps them weather sudden changes and they remain friends and live together in homes in the dark and the light.

While this story plot seems quite simple at first, the language and illustrations convey insights into what it means to cross borders and to adapt to another country or space that is unfamiliar. Shaggy longs to enter the place of shining colors but fears doing it alone. Sparkle has no desire to leave her sunshine and is afraid of the dark. But for both, their emotions of fear and rejection of what is different are juxtaposed with the curiosity they feel about the other land. Tentatively, they decide to “just go to the edge . . .have a quick look, and then come back.” It is in the borderland, where the light is neither dark or light, rather gray-blue, that they meet and feel comfortable enough to begin to be friends. They each feel anxious as they begin to venture into the unknown of each other’s land, but their fears are quelled because they are with a friend who is familiar with the new land.

This story has many themes, one being friendship with someone who looks different. It also communicates a theme of hope in adjusting to new ways of living. As the two friends adjust to the other’s land, their coats adjust. Bright spots of light appear on Shaggy’s dark coat as he becomes more comfortable in the new sun-drenched land. The same happens to Sparkle as she learns to live in the dark. The friends acknowledge that borderland living can have a positive outcome as “the darkness can never leave the coat completely. But a spotted coat is very beautiful.” Their friendship in the borderland leads them to agree that there is “nothing better in the whole world than to have a friend who [understands] the need for a parasol and a flashlight.” The story acts as a metaphor for the changes that occur as one adjusts to new spaces.

The illustration technique used literally fits the story of dark and light. Julie Völk used cyanotype, a photographic process in which objects are laid on solar paper, exposed to the sun, and then washed in water, leaving intense blue shades surrounding the “shadows” left by the objects. The technique highlights the intense contrast between the lands of the dark and the light, but also gives visual strength to the borderland in between the two lands by “bleeding” the dark into the light.

Book titles that pair well with this unique book are ones that help readers think about crossing barriers, fences, and borders. The Other Side (Jacqueline Woodson and E. B. Lewis, 2001) explores the social barrier two girls cross as they sit on a shared fence between their yards. Like the blue-gray space between the dark and the light, the fence becomes the borderland where the two girls can become friends. An artificial line can also become a barrier that cannot be crossed. In A Sky Without Lines, Krystia Basil and Laura Borràs (2019) explore the divisions that occur when walls are built to keep people separated, not permitting the back and forth exchange of experiences that is characteristic of the borderlands. Finally, in They Call Me Güero: A Border Kid’s Poems, David Bowles (2018) explores what it is like to be a pale-skinned red-haired Mexican American living in Texas, close to the border. The poems depict the tension of negotiating several cultures at the same time—a borderland experience.

Kerstin Hau was born in Darmstadt, Germany, where she works as an author and a specialized journalist. She studied other subjects (physiotherapy, media system design and children’s media) but since 2015 she has devoted her creative talents to writing for children and adults. The Dark and the Light is her first book to be translated into English.

Julie Völk was born in Vienna, Austria, and studied in Hamburg, Germany, at the University of Applied Sciences. Her pictures tell stories about growing up, strange meetings and the peculiarities of life. Her delicate style (a unique technique with solar paper) appeals to the imagination because it combines realism with fantasy. She now lives and works in Austria. Her work has been honored by IBBY several times. In 2018, she was named an IBBY Honor Illustrator; her books have also been on the IBBY Honor List and received a White Raven award. In 2020 she received the Bologna Ragazzi Prize for My Favorite Memories, written by Iranian author Sepideh Sarihi (2020).

David Henry Wilson is an English playwright, novelist, and author of children’s books. His Jeremy James series has been translated into many languages. He lectured in Konstanz, Germany, for many years and founded the university theatre. He translates a wide range of French and German books including children’s novels, art history, travel books, poetry and literary theory. He lives in Sommerset, England.

WOW Review, Volume XII, Issue 3 by World of Words is licensed under a Creative Commons Attribution-NonCommercial-ShareAlike 4.0 International License. Based on work at https://wowlit.org/on-line-publications/review/xii-3/