Teaching Humanism through Global Literature in the Elementary Reading Classroom

When I began my journey toward teaching global literature and talking about the global world, I started by asking myself: “What do I really want my students to learn, and how am I going to teach it to them?” Before pursuing answers to these questions, I first needed to establish a clear objective/goal for my class of third grade students. My goal became to teach my students about various cultures and countries with global literature while focusing on our common humanity. I chose to focus on common traits where similarities among cultures are discussed, embraced, and nurtured; rather than focusing only on differences, which carries the danger of an “us versus them” dichotomy.

In order to teach with global literature I first had to find rich, authentic texts which would act as an avenue toward beginning to talk and learn about people in the world around us. As a beginning teacher, researching books on the internet and having discussions with my colleagues became essential in putting me on the path toward finding books that my students would be interested in and be able to connect with. Through highlighting the similarities among all people, reading various texts/genres, and engaging my students in classroom discussions, they were then able to make and develop personal connections to the texts through the exploration of books such as: Same, Same, But Different (Kostecki-Shaw, 2011), Whoever You Are (Fox, 1997), and This Child, Every Child (Smith, 2011). After reading these books, we talked about the traditions and stories from our own cultures. Rich literature provided the space for classroom discussions that explored how children all over the world face similar experiences with school, family, and everyday life, as well as what makes them unique. 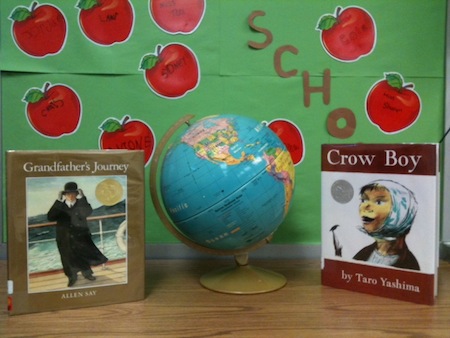 One country that my students and I chose to explore together through global literature was Japan. Some texts that I utilized to teach about Japan’s culture were Grandfather’s Journey (Say, 1993), and Crow Boy (Yashima, 1983). After reading and discussing these texts, I immersed students into the culture by using multimodal teaching techniques to aid them in going beyond these texts. Our class began with a morning message that incorporated Japanese writing which taught the children about the Japanese language while also providing an agenda that explained what we would be learning about in class. We then practiced speaking and writing phrases in Japanese, wrote a Haiku, created origami, listened to relaxing Japanese instrumental music, and went to various websites to read and learn about daily life in Japan. Each of these experiences aided students in better understanding Japanese culture. Including engagements that examined the daily life of children in Japan and revisiting texts like Same, Same, But Different (Kostecki-Shaw, 2011) allowed my class to continue our dialogue about our universal similarities and unique differences.

The texts we used opened the door to new worlds and also kept our conversations about our shared experiences as our central focus. Through the use of global literature, literature that opened new dialogue, I was able to create a world where students could make connections to the lives of people from other cultures by seeing themselves.

AmyMarie Livermore is a literacy specialist at the Lockhart Elementary School in Massepequa, New York.