Who Writes History? A Study of Columbus’ Voyage

This past school year, my third graders and I read a variety of texts with different perspectives about Christopher Columbus. As a result I doubt my students will ever look at history the same way again.

As a teacher, I am very influenced by the work of Linda Christensen (2000, 2009), whose books have helped me teach with a social justice perspective in which students respect the past, the present, and each other. By focusing lessons around the ‘big ideas’, such as the story of Columbus, by using literature with a global perspective, and by adding increasingly complex texts for students to read and think about, Christensen has led me to help my students become critical thinkers as well as address the new Common Core State Standards.

As I planned this unit on Columbus, I kept in mind the criteria which Christensen suggests for creating classrooms for equity and justice:

•Lessons should be grounded in the lives of students
•Lessons should be critical (look at the reasons why things are the way they are… who benefitted, who lost, who won)
•They should incorporate multicultural, anti-racists, and pro–justice ideas (soft multiculturalism, hard racism- looking at hard issues)
•There should be a participatory, experiential portion (role playing to help understanding – theatre of the oppressed)
•They should be hopeful, joyful, kind, visionary (who got it right…look for the good as well as the bad)
•They should encourage activism (students act on the knowledge they learned, finding a way to do something good in the world)
•The tasks should be academically rigorous (lens and focus)
•The lessons and materials must be culturally sensitive (sensitive) 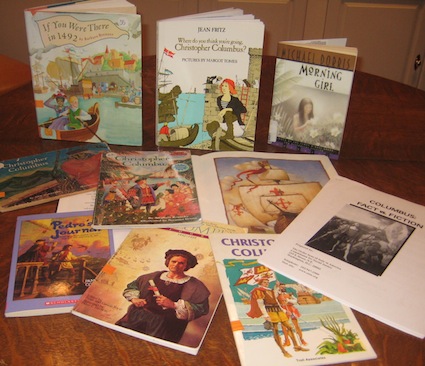 Columbus Day was approaching and I thought this was the perfect lesson to focus on equity and social justice. To start the unit I asked my class what “history” was. After coming up with some responses (happened long ago, events that happened in the past, a story reborn, his-story) I then asked them whom they thought writes history (people who lived through it, people in it, person in charge). I noted their responses on a chart. Then I told the class the following story about two islands:

Island “A” was a peaceful island in which the natives grew most of their food and took from the sea what they didn’t grow. On Island “A” grew a special tree. The tree produced a fruit that had many purposes. They could eat the fruit and make wonderful things from it. The peel of the fruit had many uses as well. They could make bowls from the peel when it dried. The children made toys. It was a great tree. One thing the fruit could do was float. There was another Island, Island “B”. They did not have the special tree but they had mountains and caves on their island. In the caves was metal that they used to make many things. One day a fruit from the tree on Island “A” floated over and landed on the shores of Island “B”. The people of Island “B” thought the fruit was the greatest. They wondered where it came from so some of them set out to search the area. In time they came to Island “A” and saw the tree. The met the people of Island “A” and asked about the fruit. The people of Island “A” were more than happy to share the fruit but that was not good enough for the people of Island “B”. They wanted it all for themselves. So they decided to come back and take the fruit. Because they had metal on their island they had better weapons and by the end of the Fruit War, no one who lived on Island “A” survived. The people of Island “B” eventually started to live on both islands and many years passed. In time books were written about the history of the people of the two islands. Children were taught the history in school. The history books said this… “One time there were two islands. One had many wonderful people on it. The other had no people living there but they had a special tree. Brave explorers found the island and the fruit from the special tree. That is how our great nation came to live on two islands.”

Of course the class had much to say about the fairness of the history and so we started out to learn about the “discovery” of our nation. They went back to the list they had made and added that “the winners wrote history”.

A “Tea Party” is another strategy from Linda Christensen (2009) that encourages role playing in classrooms to help students take on different perspectives and to get inside a historical person’s actions. To start my “tea party” I wrote nine different monologues from different perspectives of people who lived during that time. I included Columbus, the interpreter brought along on the ship, Rodrigo De Tirana who was the first to see land, a ship boy, and five Taino people. The children each read the role they picked and we had a class tea party. In groups of three, each character introduced themselves to the class. We then filled out a question sheet looking for those who felt Columbus was a good friend, or those who had been taken against their will. At the end of the activity, the class had a different perspective about what Columbus Day actually celebrates. 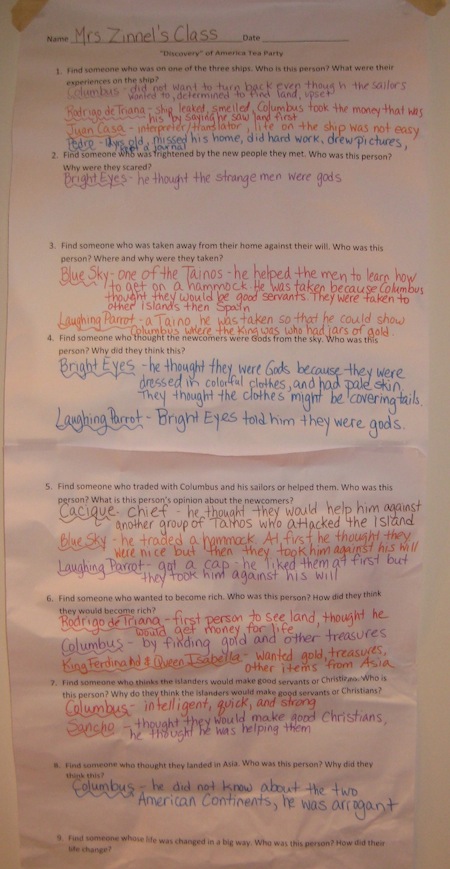 This role-playing initiated a lot of questions and discoveries from my students. One thing they wanted to know more about was why Spain and other countries did not want to travel by land to Asia and wanted to find water routes instead. Something else they became fascinated with was the amount of words our language borrowed from the Taino language. I read to them excerpts from Columbus’s journal, and Morning Girl by Michael Dorris (1992), which is about a Taino brother and sister before Columbus arrives on their island. Another document I shared with them was a pamphlet put out by The Sons of Italy organization. This pamphlet argues for why Columbus should have his day of recognition. We learned some interesting information. The class learned that many cultures captured slaves, not just the Spanish invaders. This fact was upsetting to them. They spoke a lot about how slavery was wrong.

To end the unit, each child chose a character and wrote an inner monologue, in the style of Morning Girl and her brother Star Boy. This was an academically rigorous task for third grade students. Nevertheless, I was very pleased with their efforts. Examples of their Inner Monologues include:

I am a sailor. I am Rodrigo de Triana. I sailed on the Pinta. I saw land first. I wanted to become rich. Columbus said the money is his. The King promised money to the first man who saw land. I really wanted to get rich. I was mad because I didn’t get any money. When I go back to Spain I will say, “Columbus took my money!” Kyle (Grade 3)

I think the people taking my friends and family should not be taking them. I am frightened because I don’t want to be taken. I told my friend that did not get taken, “Don’t get too close or they will take you too!” He did not listen to me. They took him away! Now they’re gone and I feel very upset. Ann (Grade 3)

My name is Sunrise Girl. I am a native. I sleep on a hammock. With my friends I like to have fun and to make stuff. I see mom plant and I see dad hunting for food. I go to see the water and my friends come with me. I saw three ships coming my way and I ran to tell the chief what I saw. He said, “What are you talking about?”

I said, “I saw three ships.” Then he saw the ships. Soon little boats came and landed here. We said hi to the people. We gave them stuff. They were looking for gold when I was playing and talking with friends. Everyone thinks the strangers are nice but I think they want something that is ours, and when I mean something . . . that something is food! They asked, “Where is the gold?” Then their leader took our people and made them show them where the gold was. My friends and I ran away. “I told you that he is bad,” I said to my friends.

They said, “You were right and we were wrong.”

“We have to leave if they don’t leave,” I said. So we went to see if the strangers were gone. They were… but so were some of our friends. My friends and I are alone. How can we live if we don’t know how to plant and to hunt? Soon we walked down to our hammocks, but we have a hard time sleeping. When I woke up I thought it was a bad dream, but it was real. I soon figure out how to plant because I did it with my mom. We ate the food. 50 years later I have grown old. When I was sleeping, I died with my friends. Britt (Grade 3)

What my class learned was the following:

•Not everything you read is true
•There are many sides to an event in history
•History, for the most part, is written by those in power
•Just because something is common practice does not make it right

The actions we took based on what we learned:

•We applied what we discovered to other historical events throughout the year, such as Thanksgiving
•We put ourselves in others’ shoes to try to understand them.
•We created inner monologues for other characters in books to imagine what they may have been thinking
•We asked questions… all the time… and tried to find answers.

RL 3.10 By the end of the year, read and comprehend literature, including stories, dramas, and poetry, at the high end of the grades 2 – 3 text complexity band independently and proficiently
RL 3.11 Recognize and make connection in narratives, poetry, and drama to other texts, ideas, cultural perspectives, personal events, and situations
W 3.1 Write opinion pieces on topics or texts, supporting a point of view with reasons
W 3.3 Write narratives to develop real or imagined experiences or events using effective technique, descriptive details, and clear event sequences

Many of my colleagues were impressed at how well some of the students related to and understood some very complex concepts. Besides enjoying this task, the students liked having knowledge that some people still do not have.

Casa, de las, B. (N.D.) A short account of the destruction of the Indies.

Columbus: Fact and Fiction. (2005). The Order of the Sons of Italy in America.

Meltzer, M. (1990). Columbus and the world around him. New York: Franklin Watts.