This vignette describes engagements with students that arose from a literacy community in Spokane, Washington. Please see Providing the Books for the Literacy Communities by Marilyn Carpenter for an overview of this group’s work.

We are two teachers, Meg Baker and Charlotte Streit and one student teacher, Kimberly Wade, who combined the planning and implementation of a Social Studies unit on Japan for our primary age students. The unit was a cross-cultural study using global literature as a means to build intercultural awareness and understanding for our students. The study involved Meg’s first graders and Charlotte’s and Kim’s multi-age class consisting of first and second grade students. Our elementary school is located in a suburb of Spokane, Washington in a community of low to upper middle-class neighborhoods. The student population is 86.5% Caucasian with American Indian/Alaskan Native, Asian, Pacific Islander, African American, and Hispanic students making up the remaining 13.5%. Of the 636 students in the school, 28.1% of them receive free or reduced lunch.

The study of Japan was part of the district required curriculum. Participation in the Worlds of Words grant provided an excellent opportunity for us to weave global literature and cross-cultural studies into our Japan unit. Before we launched the Japan unit, we first engaged the children in explorations about their own cultures. We read aloud books made available through the grant like Star of the Week (Saltzberg, 2010), Tom (dePaola, 1997), Lion Dancer: Ernie Wan’s Chinese New Year (Waters, 1991), and One Green Apple (Bunting, 2006). Afterwards we guided the students in responses like cultural X-rays, open mind and heart maps. Finally, we read aloud the story, Whoever You Are (Fox, 1997), to present the cross-cultural study on Japan. Fox’s story shows that despite the differences among people in the world there are similarities that bring us together. At the end of these experiences the classes came up with their own definitions of culture.

We implemented a thematic approach in our teaching throughout the unit on Japan. We began by discussing some of the topics and experiences the students could anticipate over the course of our study of Japan. We introduced the Japan unit by exploring what students wanted to learn. Students made “I wonder” statements as a means to tell us what they hoped to learn about Japanese culture. The students wrote their thoughts down on sticky notes and we recorded them on an anchor chart. Below are some of their questions and “I wonder” statements:

We told the students we would save their questions and “I wonder” statements and revisit them later in the unit to discover if their inquiries were answered.

One of our goals was for students to know about the geography of Japan; not only to understand where the country is in relation to North America, but also how geography impacts culture. The fact that Japan is surrounded by the ocean, has volcanic mountains, a large population, and small stretches of land directly impacts the economic, social, and historical aspects of the culture. To illustrate this concept, we prepared a pre-recorded Google map tour in which the students pretended to fly from Spokane to Japan. The tour included stops (close-up images) at each of the four main islands of Japan and Mount Fuji. Students made discoveries through viewing the images. For example, the students noticed that Japan has a lot of mountains. In their discussion they concluded there was less land for farming. They also observed how the islands are surrounded by the ocean. These experiences helped students understand why seafood is a large part of the Japanese diet, not merely because they like fish, but because it is an easily accessible source of food.

Wabi Sabi (Reibstein, 2008) tells the story of a cat that makes a journey across Japan to discover the meaning of her name. Ed Young’s rich collage illustrations in Wabi Sabi gave the children another view of places in Japan. At the end of our study we concluded with the read aloud, Tsunami! (Kajikawa, 2009) to help the children connect with the earthquake and tsunami disasters.

Throughout the unit, we read aloud stories and nonfiction about Japan. Some of these books were purchased from Worlds of Words grant funds. Grandfather’s Journey (Say, 1993) is about a Japanese American man who recounts his grandfather’s love for Japan and America. Several of the students made strong connections with the characters. In fact, a few of them wiped away tears at the end of the story. In our group discussion, the students shared their own experiences with their grandparents. This discussion helped the children see the importance of family and history and to recognize that family is a shared value of both Japanese and American people. This new perspective helped students acquire a greater respect for cultures other than their own.

Folktales from Japan were a vital part of our study. We read traditional Japanese folktales such as Adventure of Momotaro, The Peach Boy (McCarthy, 2000). We also read aloud Kamishibai Man (Say, 2005), that describes a storytelling tradition in Japan. The students retold some of the folktales in the Kamishbai style. 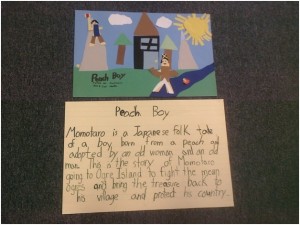 After we shared folktales like The Stonecutter (McDermott, 1975), the students worked together to create murals retelling important parts of the story. 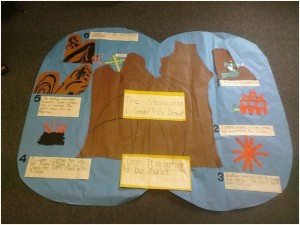 During many of our class discussions, we found that students discovered similarities between American and Japanese cultural traditions. For example, we told students the legend of Tanabata (Star Festival), which is about two stars that cross the Milky Way and meet each other once a year on July 7. The Japanese celebrate by holding a parade in the evening with fireworks and bright decorations. On this day, children decorate a bamboo tree with a variety of paper shapes. The children think of wishes (tanzaku) and write them on strips of paper which are hung on the tree. The students connected that tradition with Wish: Wishing Traditions around the World (Thong, 2008), a book we had read before starting the Japan unit. They noticed how the tanzaku papers were similar to making a birthday wish. Finally, the students also compared the Star festival to the holidays of the Fourth of July and Christmas in the U.S. These comparisons and connections demonstrated that the students were developing a deeper understanding of the similarities and differences in the cultures of Japan and the United States. 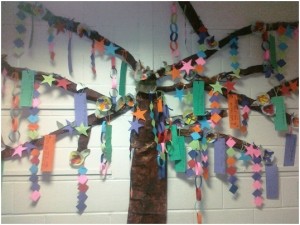 As part of our focus on traditions and food, we read How My Parents Learned to Eat by Ina Friedman (1984). A young girl narrates this story about her parents, an American sailor who meets and falls in love with a Japanese woman at the port city of Yokohama. They are both too embarrassed to eat in front of the other because they know their customs are different. In secret, the Japanese woman learns how to handle a fork, knife, and spoon. The American soldier dines alone at a Japanese restaurant and asks the waiter to show him how to use chopsticks and drink soup from a bowl. In the end, the couple meets for dinner and appreciate that each took the time to learn the other’s way of eating. At the end of the story, the narrator says, “That’s why at our house some days we eat with chopsticks and some days we eat with knives and forks” (np). Friedman weaves Japanese and American eating traditions into the story, but most importantly she teaches respect by showing how two people who care about each other can value their differences. This book prompted a lively discussion about the similarities and differences between the eating styles of the two cultures. Another book that was instrumental in helping the children to understand Japanese food and traditions is Hiromi’s Hands by Lynne Barasch (2007).

We had two culminating celebrations of our Japan unit. First, we had a field trip to the Spokane branch of Mukogawa Women’s University. The Japanese students at this university are English majors who have come to study for a semester in the United States. These college students involved our students in playing Japanese games, storytelling a la Kamishbai Man, and calligraphy demonstrations as well as a visit to the campus museum. Our last celebration was a Japanese food tasting. Parents came to our classes and demonstrated how to make rice balls and sushi. The students had a tasty adventure trying out different Japanese foods.

Toward the end of the unit, we revisited the anchor chart we made at the beginning of our study. The students shared their new learning in relation to their “I wonder” statements and questions. Their responses indicated that they had acquired a significant new awareness of the similarities and differences in cultures. Finally, the children brainstormed their new learning about Japan. It was a long list.

By implementing multicultural literature in our classroom, we discovered that the stories stirred students’ imaginations and helped them connect their lives to the characters and events. This was evident in many of the books we read, such as Grandfather’s Journey (Say, 1993) and How My Parents Learned to Eat (Friedman, 1984). The more books we read, the more we noticed students realizing that while cultures may be diverse, people are more similar than different. Finally, it was evident that the students’ ability to define culture was enhanced by the combination of reading global literature and reader-response activities.

Meg Baker is a first grade teacher in the Mead School District in Spokane, Washington. In her 24th year of teaching, Meg has discovered that all children love quality literature!

Kimberly Wade has just earned her Master’s in Teaching from Eastern Washington University and is looking for a teaching position. During the time of the grant she was a student teacher in Charlotte Streit’s classroom.