Building Intercultural Understandings through Global Literature:
An Introduction to Our Work

By Prisca Martens and Ray Martens

In spring 2011 seven teacher colleagues joined us in a study group to explore using global literature to build children’s intercultural understandings. We were particularly interested in learning how global picture books support children’s intercultural understandings of themselves and others as cultural beings, their understandings of their roles and responsibilities for taking action to make the world a better place, and the role art plays in their developing understandings. We focused on both the written and the pictorial texts in these books. Our group was comprised of two first grade teachers (Michelle and Jenna), four second grade teachers (Jan, Debra, Brooke, and Rachael), the school art teacher (Stacy), and us as university researchers. We met as a group every few weeks to discuss global literature, what we were seeing and experiencing with the children in the classrooms, and issues that arose. In this introduction we set the stage for the vignettes about our work by explaining our purposes and goals and how we got started. Then, Michelle, Jenna, and Stacy will share some of our experiences with the children around global literature.

Several factors motivated us to enter into our exploration of the development of first and second grade children’s intercultural understandings related to identity and taking action through global literature.

First, we felt the need to enhance children’s global awareness. With occasional exceptions, the literature the children primarily read was multicultural, set and published in the United States. While very rich, this literature focused the children on life in the U.S. Given the ever-increasing interconnectedness of the world economically, politically, and socially, we wanted the children to develop understandings of different cultures and ways of life and other issues and realities around the globe (Allan, 2003; Banks, 2004). We believed that consciously including international books would provide rich opportunities to discuss people, life, and experiences in global cultures with the children. Our hope was that through discussions of and experiences with global literature children would broaden their understandings of culture, develop a pluralistic perspective, value ways of living/being around the world, and understand interdependence among people/nations (Allan, 2003; Banks, 2004; Short, 2009), thereby strengthening their intercultural understandings.

Our second motivation for the study was the rich diverse population of the school. The student body (537 students in grades PK-5) was 41% European American; 29% African American; 17% Asian/Pacific Islander; 13% Hispanic; and, <1% Native American. Each of the classrooms that participated in our study had 22-23 students and included one to three students who were born in another country (i.e., Nigeria, India, Nepal, South Africa, Sri Lanka, Korea, Cuba) and 3-10 who spoke languages other than English at home (i.e., Greek, Nepali, Telugu, Spanish, Korean, Chinese, Hindi, Afrikaans, Yuruba, Tagalog, Swahili). In addition, each classroom had one to six children who were born in the United States but whose families immigrated within the past fifteen years. We knew the diverse languages and experiences the children brought with them to school would add to the discussions of global literature. We also thought that reading and hearing literature from places around the world where their own and their classmates’ families originated would connect children to the books in personal ways.

Our final motivation was to continue our exploration of the written text and art in picture books with children. For several years Michelle, Jenna, and Stacy have collaborated with us to study how helping children learn the language of art and read the artistic meanings represented in the pictorial text (illustrations), along with reading the written text, related to the children’s thinking and comprehension. We’ve found that children move seamlessly between the sign systems of art and written language to build deep understandings of story and that they are attentive to details, think critically, and use the written and pictorial texts to make strong inferences (Croce et al., 2009; Maderazo et al., 2010; Martens et al., 2010). In addition to continuing this work using global literature, we wanted to explore how the children’s representations of the intercultural understandings they expressed in written language related to the understandings they expressed through their artwork.

Before explaining the specifics of what we did, in the next section we’ll share how we got started and oriented the children to reading global literature and thinking globally.

To contextualize our focus on global literature, we purchased a large world map (approximately 2’ x 3’) for each classroom. We laminated the maps and mounted them on foam core so they could simultaneously be easily accessible to the teachers and children for close up work but could also be moved to different places in the classrooms. The teachers also created and posted timelines in their classrooms. In some classrooms the timelines stretched across the wall over the chalkboard and in others they were on a large poster.

The teachers explained to the children that over the coming months they would be reading books from different places around the world. They also explained that probably everyone’s family moved to the United States at some point. The teachers highlighted children who had recently moved and talked about how their own and other families had moved a long time ago. To learn when and from where families came, the teachers asked children to have their parents complete and return a survey. The children took the surveys home, accompanied with a note explaining what we were doing and asking the parents to reply with the following information:

As the children brought back their survey forms we created charts that summarized the information. Here is an excerpt of one of the second grade charts:

The teachers plotted the families’ origins on their maps and connected a piece of string from a picture of the child outside of the map to his/her family’s place of origin. The map from Michelle’s classroom is found in Figure 1. 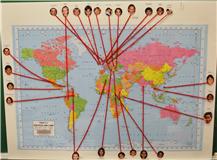 The teachers also entered the child’s name on the timeline to indicate when the family immigrated to the U.S. Figure 2 shows an example of one of the timelines from second grade.

Figure 2. A second grade timeline indicating when the children’s families came to the U.S.

The teachers also included information on their own family origins and we added our information to the maps and timelines in each classroom as well.

Not surprisingly, plotting where their families were from and when was a difficult concept for some parents and many of these young children. Quite a few parents returned the information sheets stating their family originated in the United States or Maryland or Texas, etc. We worked with these parents to explain the information we wanted.

Many children struggled with this concept too. When the teachers plotted the information on the map/timeline, children would insist, “But I was born here!” Ki, a first grader in Michelle’s class, was one of those children. For four months he insisted his family was from the United States. Then one morning he came in and announced, “OH! My family started in Africa, Mrs. Doyle! My mom said so. Now I get it!” It was evident from Ki (and other children) that discussions around family, family origins, and what happened in the years before the children were born occurred in homes. Ki beamed as he finally connected his picture on the side of the map to Africa with a piece of yarn.

Plotting family origins on the map raised other issues. During one of Jenna’s map discussions with her first graders, she plotted Elinah’s and Alice’s families, both of whom had origins in Kenya. Joe asked, “If they’re both from Kenya, why do they have different colored skin?” Jenna explained that both of Elinah’s parents were from Kenya while one of Alice’s parents was from Kenya and the other from Europe. As the discussion continued, the children made connections and built their understandings together. This opened the door to discussions related to identity that Jenna built on as she read and discussed the global literature with her students.

To explore the children’s intercultural understandings of themselves and others as cultural beings and support their understandings of taking action to make the world a better place we created two text sets of global literature, one for each focus. Each text set also highlighted an art concept. For the Identity Text Set we focused on the artists’ use of color to represent feelings and emotions and line to represent movement. In the Taking Action Text Set the art focus was contrast, how artists use differences in color or lack of color, contrast of pattern, or contrast of shape and line to express meaning.

Ray and Prisca were in the classrooms to read and discuss some of the books and the teachers read others with their children. Whenever a book was read, we highlighted the country in which the story was set and/or published on the map and whose family was from that area of the world.

Our usual procedure was to read the books on a document camera so the children could follow the written and pictorial texts clearly. After each reading we invited the children to respond to the story orally. Through these discussions the children constructed rich meanings together, building on each other’s insights and connections. As the discussions and responses progressed, we went back to the book to examine two or three illustrations and talk with the children about why the artist made the particular decisions he/she did to represent story meanings. These explorations of the art further enhanced the children’s understandings of the stories. Following the oral responses to the story meaning, we invited children to explore and connect to aspects of the story using art concepts as the artist did. Children usually created these artistic explorations in their sketchbooks.

The children carried their sketchbooks between their homeroom and art instruction where Stacy built on the concepts discussed in the classroom. Sometimes Stacy went back to stories the children already read and sometimes she introduced a book. Sometimes too the children would create a piece of artwork with Stacy and then write about it in their classroom.

In the following articles we talk more specifically about our discussions around global literature for each text set and the art connections. Michelle Hassay Doyle discusses and provides examples of the children’s work and thinking with the Identity Text Set and Jenna Loomis shares discussions and children’s work related to the Taking Action Text Set. Stacy Aghalarov discusses how she worked with the teachers and connected her art instruction to the global literature we were reading.

Prisca Martens is a Professor in the Department of Elementary Education at Towson University in Towson, Maryland, where she teaches literacy courses. She can be contacted at pmartens@towson.edu.

Ray Martens is an Associate Professor in the Department of Art at Towson University in Towson Maryland, where he teaches courses in art education. He can be contacted at rmartens@towson.edu.