Exploring the Story and Art in Emmanuel’s Dream

“You can do it, you can do it!” I must say that a thousand times a week to my students. I am a veteran teacher of 26 years, spending most of my career teaching first grade, although I did teach third grade for two years in a private school setting. The 2017-2018 school year was my first- year teaching second grade. It took me many years before I realized there were wonderful resources outside of the county curriculum I’m required to teach. Once I was introduced to global literature and other rich literature, I began integrating it to enrich the curriculum and my students’ learning, including in my new second grade position. I’ve learned that global literature challenges students’ thinking, broadens their perspectives of themselves, others, and the world, and develops their intercultural understandings (Martens et al., 2016; Short, 2016). My second-grade class of 20 students (12 girls, 8 boys) was unique because I’d taught most of them in first grade and looped up with them, meaning I moved to second grade with the same students I taught in first grade. Six students were native Spanish speakers and received ELL (English Language Learners) services, one student had an IEP (Individualized Education Plan) for speech, and six others received reading resource support from the school’s Reading Specialist. My class was diverse as is our school population. Three students were European-American, nine African American, one Asian American, six Latinx, and one mixed race. Their reading levels according to Fountas and Pinnell ranged from kindergarten to 4th grade.

Reading Emmanuel’s Dream
Since the second-grade curriculum guide included few literature suggestions, I found places to add global literature stories to enhance students’ understandings of themselves and others around the world. One of our language arts curriculum units focused on influential people, such as Bessie Coleman and César Chávez, and how they overcame the struggles in their lives. I decided to add Emmanuel’s Dream: The True Story of Emmanuel Ofosu Yeboah by Laurie Ann Thompson and Sean Qualls (2015) to enrich the unit and students’ understandings. In addition to Emmanuel’s determination to overcome his struggles, the setting of the story is Ghana, West Africa, and three students had family living in Kenya. Since both countries were on the continent of Africa, I thought the book would help them as well as other students make a meaningful connection to this area of the world.

Emmanuel’s Dream is a biography of Emmanuel Ofosu Yeboah who was born with a deformed leg. While others looked down on him, including his father who left the family, his mother encouraged him to follow his dreams. He hopped to school, learned to play soccer, supported his family, and became a cyclist. After his mother’s death Emmanuel persevered and developed a plan to cycle 400 miles around Ghana to show that “disability doesn’t mean inability”. Through his travels and conversations with other people with disabilities and followers, Emmanuel accomplished his dream. He continues to work for people with disabilities today.

Because of student connections with Africa, I thought reading Emmanuel’s Dream to start the unit on influential people and their struggles would interest and motivate them. When I introduced the book and mentioned it was set in a country in Africa, several students said, “That’s where I’m from!” As I read the book, we discussed Emmanuel’s struggles and how he accomplished his dream. Samuel raised his hand and stated, “Wow, how could he ride all that way with one leg?” We discussed how he tied his deformed leg to the bicycle and also how hard it would be to ride with just one strong leg and stay balanced.

In our daily class meeting the next morning we referred back to Emmanuel’s Dream and discussed what it means to have a condition seen as a disability. Several students had first-hand experiences with relatives who are labeled as disabled. Jay, for example, spoke from his heart when he described his sister who is in a wheelchair and how he helps her retrieve things. Perseverance is one of the virtues at our school so, this story built on previous discussions.

Creating in Storying Studio
Later in the day we had Storying Studio, a time in which we use picturebooks as mentor texts to inspire students to create their own stories in writing and art. We’ve examined and studied many authors and artists and have learned a range of aspects of writing and art through mini-lessons.

In Storying Studio, we examined the illustrations in Emmanuel’s Dream to see how the artist, Sean Qualls, created each picture. As we explored and discussed the double-page spreads we noticed that Qualls used simple shapes, watercolors, stencils, black marker, and scrapbook paper in each illustration. On an anchor chart, we listed these materials and how they were used. For example, we noted Qualls used simple shapes for images, such as circles for the sun, trees, fruit, and people’s heads.

Then it was time for the students to create their own art and write stories. I provided large pieces of white paper and told them to explore, creating what they wanted using any of the materials and ideas for images listed on the anchor chart. In our classroom I have table full of supplies, so students have access to multiple sized and shaped premade books, watercolors, stencils, construction paper, writing paper, markers, crayons, colored pencils, and scrapbook paper. During Storying Studio, they use any of these materials to create their stories. So, when creating artwork similar to Sean Qualls’s art, lots of options were available. Students also had paper to write a story for their art.

While students connected with Emmanuel and his story, I chose to leave the focus for their work open-ended rather than directly related to the story. My philosophy in writing is to not limit a child’s creativity. As a child I grew up being told what to write about. I was a very creative child and realized later in life I would have been a more successful student had I been given open-ended assignments. Also, I was curious to see what students would create with so many materials available to use in their artwork.

Students worked diligently on their artwork and stories for about a week. They worked on their stories in the morning when other seatwork was complete and during our Storying Studio time in the afternoon. The time would vary each day, but they usually had 30-40 minutes to work during Studio. There was much diversity in the materials and shapes students used in their artwork and in their stories. 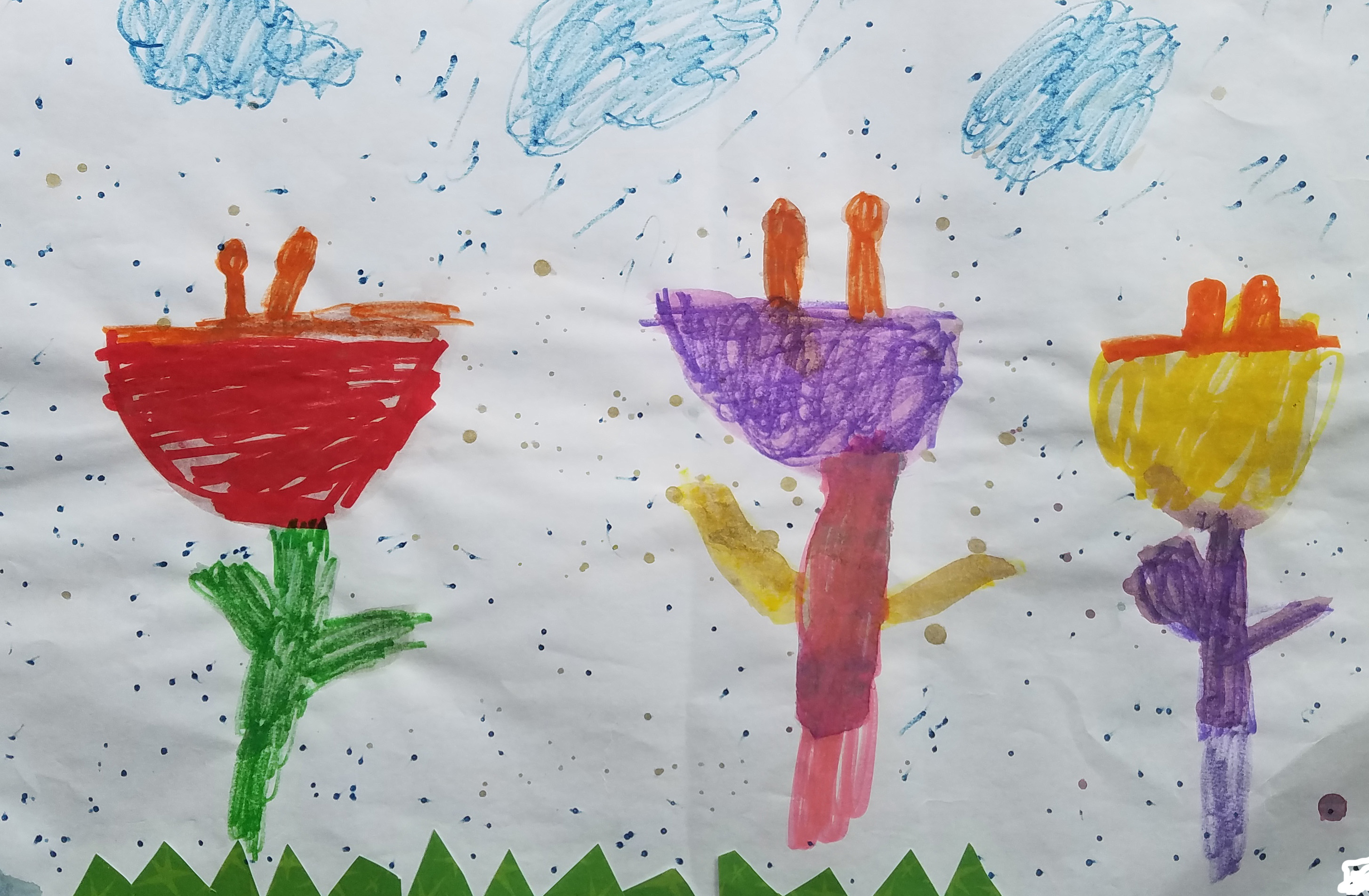 Anthony, an English Language Learner, wrote “Flowers in the Rainy.” His art in Figure 1 used markers for the clouds, watercolors and markers for the flowers and rain drops, and scrapbook paper for the grass. His story read (spelling corrected): 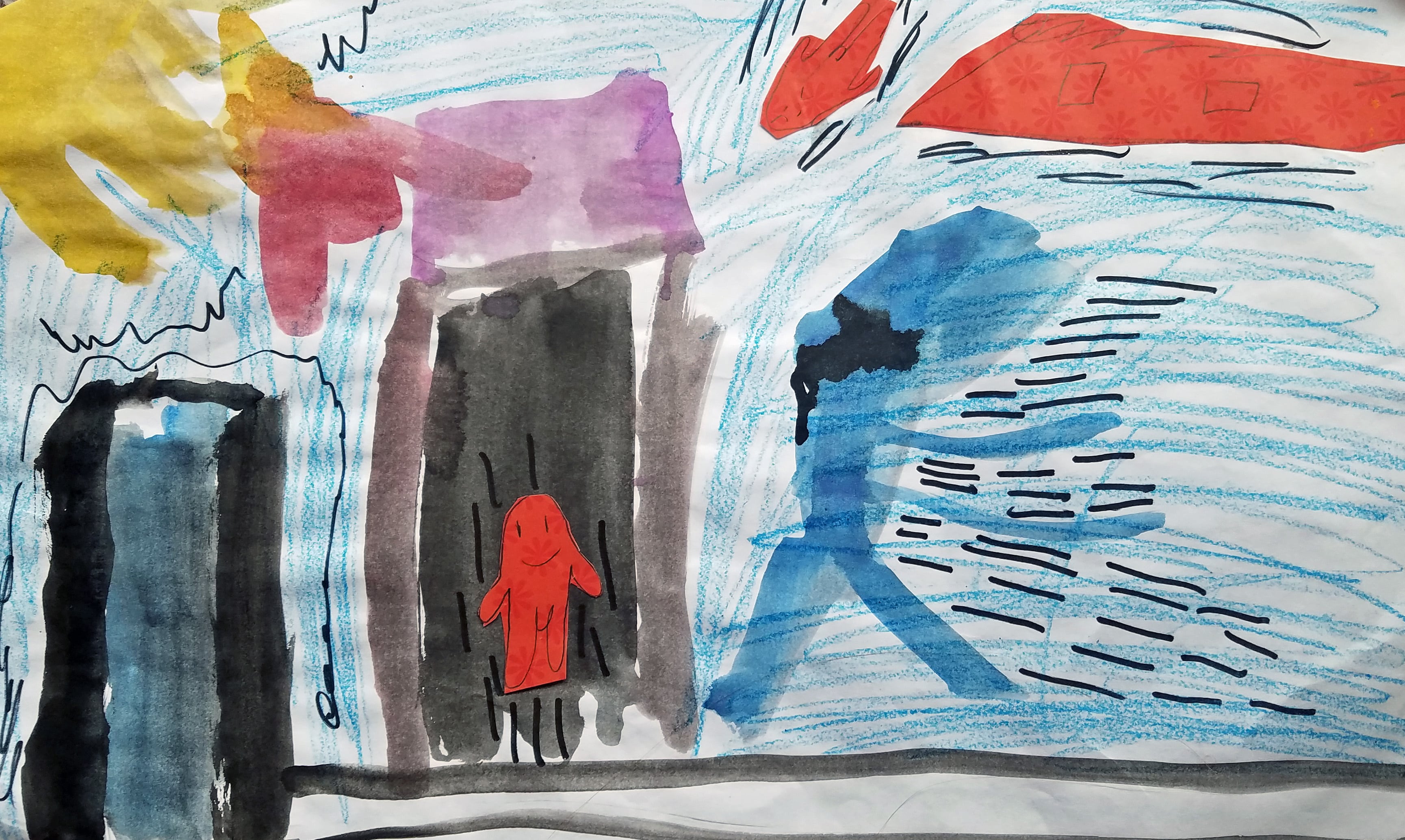 José, also an English Language Learner, wrote “The Black War.” José used watercolors for the sun, buildings, and Zombie monsters, crayons for the background, and construction paper for himself, the enemy and the plane in the sky. He also used markers to make jagged lines to show danger and straight lines to show movement (see Figure 2). His story read (spelling corrected): 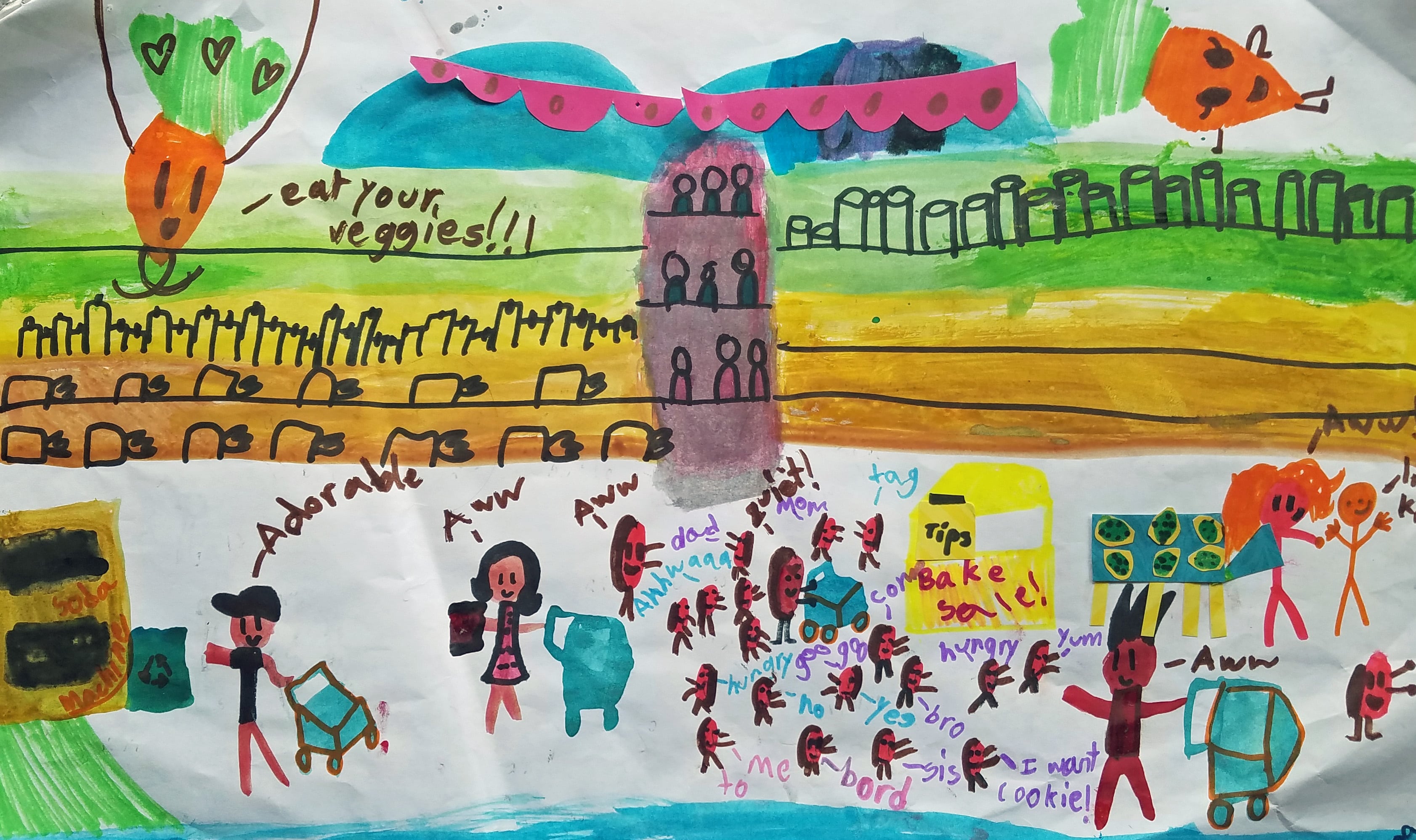 Figure 3: Seema titled her story “The Trip to the Market” and used watercolors for the background, carts, and parents, and markers for the children and some other people, buildings, writing, and vegetables.

Seema titled her story “The Trip to the Market” and used watercolors for the background, carts, and parents, and markers for the children and some other people, buildings, writing, and vegetables (see Figure 3). She used scrapbook paper for the table, food, a banner, and signs. While working on her art, Seema commented, “This is so much fun being able to work like a real illustrator!” Her story read (spelling corrected):

Today the Hot Dog family was going to the market. Lizy, Lily, Rosa, Lucy, Emma, Emily, Trisha, Kara, Karina, Rori, Simon, JR, Sam, Danny, Harry, Fin, Fred, and Timmy were all in the Hot Dog family and were so excited. The Hot Dog family went in their $1,000,000 car cause they had a big family. Their family had 18 children and 23 cousins and 14 aunties. But they weren’t going together with their whole family. Their cousins and aunties are staying home and will clean the living room. The family drove and the kids kept on singing. They were finally at the market. The kids wanted a cookie but their parents said “NO!” The kids all cried so it was really loud. So the parents said yes and the kids screamed with joy. “YAY!” the kids yelled. “I can’t wait to taste mine”, said Trisha. “Me too,” said Sam. The kids’ parents bought a toy for each kid. It was $23. The kids were soooooo happy! They left the store and went home. The kids all slept in the car the whole way home cause it was a tiring day. The End. 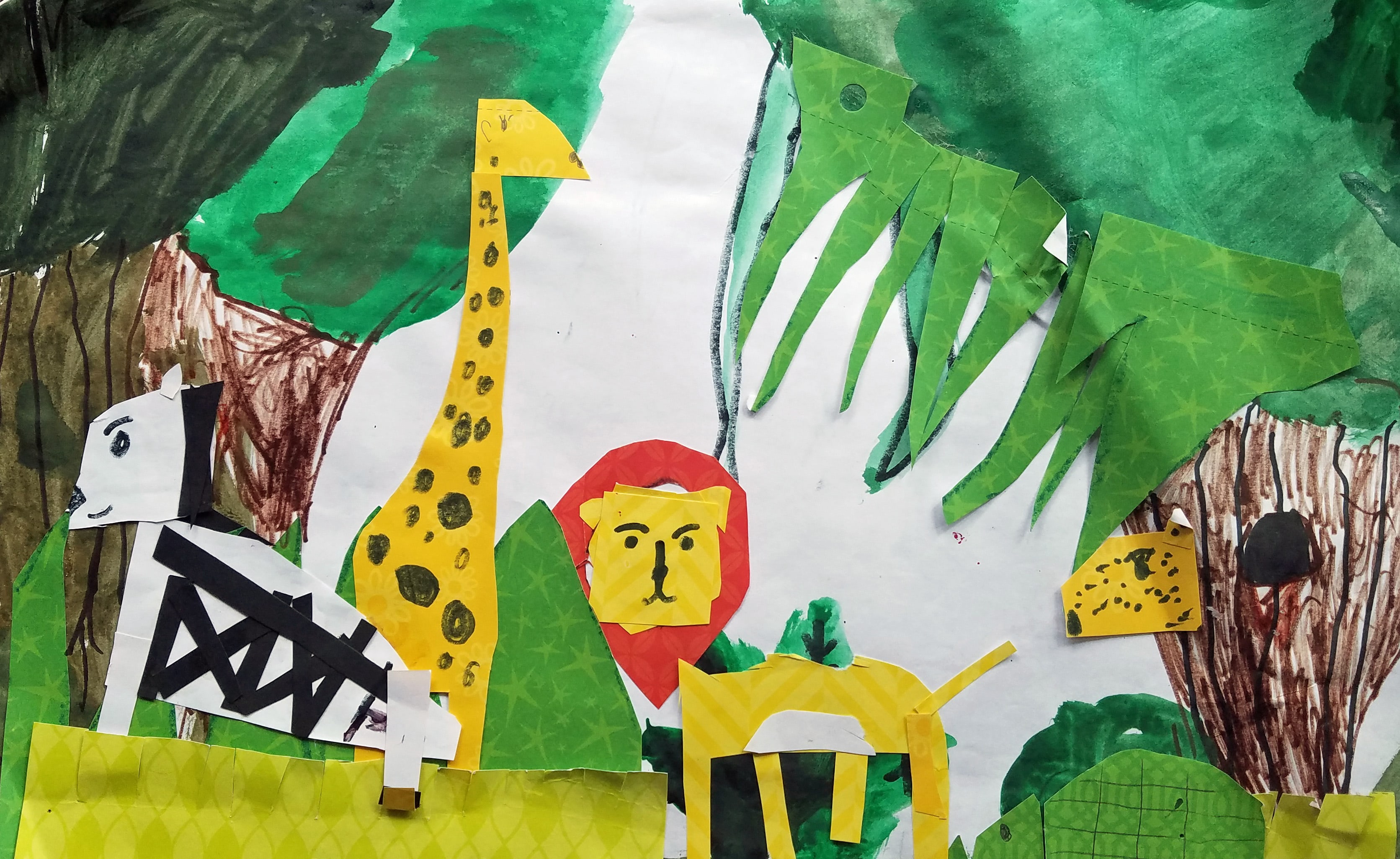 Figure 4: Carter’s art was very intricate and detailed, but he ran out of time to complete his story in school.

Carter’s art (see Figure 4) was very intricate and detailed, but he ran out of time to complete his story in school. Carter used watercolors for the ground, trees, and bushes, markers for the tree trunks, and scrapbook paper for tree branches/vines and the different animals in his jungle. While working, Carter stated, “I am so glad I get to write about anything I want!” The beginning of his story read (spelling corrected):

Closing Thoughts
Emmanuel’s Dream is a powerful story about persevering to follow your dreams. The story generated important and powerful conversations. Though the setting was in Ghana, students made strong connections between the story and their personal lives. They learned about another culture and understood that others there have struggles, dreams, and persevere just like they do. I was also excited about students’ art creations based on Sean Qualls’s work and their stories. I found that the time and detail students invest in their art was usually reflected in their writing. Their art inspired their imaginations and creativity. After many years of teaching young children, I believe that discussing rich global literature to broaden students’ perspectives and understandings of themselves and others in the world and encouraging them to write about what interests them develops strong independent thinkers, readers, writers, and artists.

WOW Stories, Volume VI, Issue 1 by Worlds of Words is licensed under a Creative Commons Attribution-NonCommercial-ShareAlike 4.0 International License.
Based on a work at https://wowlit.org/on-line-publications/stories/wow-stories-volume-vi-issue-1/.