University students meet in small groups to write and illustrate picture books in my children’s literature class in Saudi Arabia. The best of those books are published and distributed through the publishing house of KAU (King Abdulaziz University, Jeddah). Each week, this blog focuses on one of the group’s experiences of producing a picture book and shares the books that inspired the group.

The idea of the book by Effat Basudan, Arwa Alghamdi, Reham Alotaibi, Shuroog Alshehri, and Nisreen Basalim was originally to focus on the feelings of objects. They decided on a t-shirt to be the main character of their book. They discussed many plots such as the feelings of t-shirts when getting dirty, washed, and worn many times. The group agreed that a t-shirt does not reflect the Saudi culture so they changed the character to a thobe (Saudi men’s white dress) and the ideas they discussed eventually led them to write about recycling.

The following books inspired them in developing their plot:

Aldajaja Baq Beeq (Baq Beeq Chicken) by Rania Daher (Lebanese) and Joel Ashqar (Lebanese) (2009, Kalimat, UAE) is about a dreaming chicken that did not accept being imprisoned on the roof of one of the houses and worked hard to escape. The group was inspired by the idea of working hard to make one’s life better. They liked the colorful illustrations as well.

Tantara (A form of Bedouin embroidery) by Manal Shata (Saudi) and Haifaa Hasanin (Saudi) (2009, Kadi W Ramadi, Saudi Arabia) is a chapter book for children in which every chapter represents a different part of Saudi Arabia, how nature affects ways of living, buildings, clothes, embroidery, and children’s play. They were inspired that the culture of Saudi was highlighted in the book.

Balonati Allati Tarat (My Balloons that Flew away) by Arwa Khumayis (Saudi) and Thuraya Batarji (Saudi) (2008, Kadi W Ramadi, Saudi Arabia) is about hope. The book is about a child who loses her balloons and tells her mother about her loss. Her mother tells her that one day she will find her balloons. She waits for her balloons for a long time and one day, after rain falls, she finds the colors of her balloons in a rainbow. The group members were inspired by the landscape and the colors of the illustrations that were based on Asir (a region in Saudi Arabia).

In Qissat Hajar (The Story of a Stone) by Ayman Abdulhamid (Egyptian) and Salah Besar (Egyptian) (2007, Nahdat Masr, Egypt) the Islamic history is told through the point of view of stones. Each chapter focuses on a stone of significance that existed in the era of that particular Islamic event. The group liked the writer’s way of representing the feelings of stones as if they were human.

The first scene of the group’s story is of a thobe running away from his home. He talks about his feelings, recalling the coming of a new thobe to the dress cabinet. The thobe thinks that the child who owns him is going to throw him away. In the end the child finds the thobe on the street and feels bad for the shape it is in. His mom thinks of an idea and she sews a new thobe for the child’s teddy bear using the old one. The group gave the book the contemporary title of Hal Takhalla Anni? (Did he abandon me?). 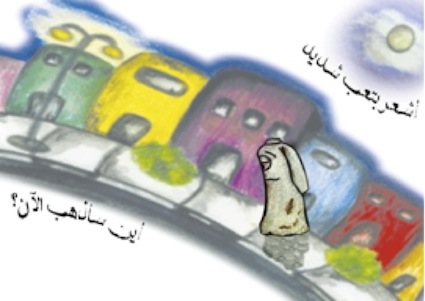 Alshaimaa Almerwai is working on the book design. The date of publication is not decided yet.