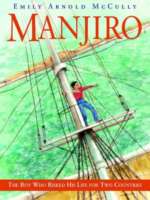 In 1841, Japan had been closed to the outside world for 250 years, and anyone who tried to return to the country after leaving it could be executed. So when the small fishing boat on which 14-year-old Manjiro was working was shipwrecked, he despaired of ever returning to his village. The captain of the American whaling ship that rescued Manjiro took a special interest in him, inviting him to come live in Massachusetts. There, Manjiro was treated like Captain Whitfield’s son, and he began to feel as though Massachusetts was his second home. Still, he never gave up his dream of finding a way to return to Japan and see his mother again. Watercolor illustrations bring to life the true story of a determined and resourceful young man whose intimate knowledge of two cultures later led him to play an important role in the opening of Japan to Western trade and ideas.