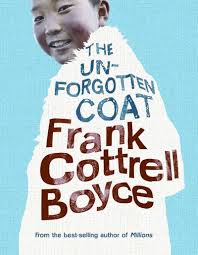 When two Mongolian brothers inexplicably appear one morning in Julie’s Year Six class, no one, least of all Julie, knows what to make of them. But then Chingis, the older of the two, proclaims that Julie is to be their “Good Guide” a nomadic tradition that makes her responsible for welcoming the brothers to their new home. Now Julie must somehow navigate them through soccer, school uniforms, and British slang, all while trying to win Shocky’ s attention and an invitation to her friend Mimi’s house.

One thought on “The Unforgotten Coat”