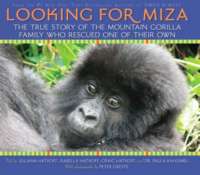 In a magical place called the Congo, in the beautiful forests and jungles of Virunga National Park, lives a young female mountain gorilla named Miza. She was just like any other baby gorilla, riding on her mother’s back, playing, taking naps. Then, one day, when Miza and her mother were out searching for food, Miza’s mother disappeared, leaving her baby alone and frightened. Miza’s father, a fierce silverback named Kabirizi and the leader of Virunga’s largest family of mountain gorillas, set out to find Miza. The Congolese rangers, who dedicate their lives to protecting the gorillas, were searching for Miza, too. Everyone was worried about her. Then something amazing happened: Kabirizi found Miza and brought her back to live with her family. Virunga is home to roughly 380 mountain gorillas, just over half of the planet’s remaining mountain gorilla population. Miza and other mountain gorillas face an especially uncertain future. They are an endangered species, disappearing at an alarming speed. Without our help they could vanish completely.

One thought on “Looking For Miza”