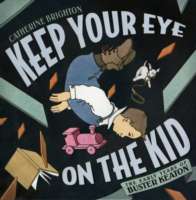 FAMOUS AT FOUR! Four-year-old Buster Keaton became one of the best-known comedians of his age and inches when his father threw him across a vaudeville stage, shouting “Keep your eye on the kid!” The crowd roared as he easily landed on his feet and instantly became a star.  As Buster grew, he set his sights on the budding world of Hollywood and went on to become one of America’s most beloved silent-film stars. Airy detailed illustrations evoke small-town USA in the early 20th century. Told in Buster’s voice, this captivating biography introduces young readers to a boy who became an American icon and changed the face of comedy and the film world forever.