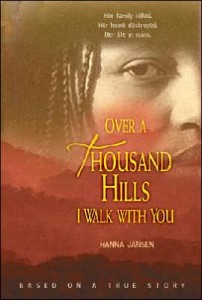 “They were Tutsis. Jeanne knew now that all Tutsis were supposed to die. Without exception. But why?”

A memoir told by Jeanne d’Arc Umubyeyi through her adoptive mother, Hanna Jansen, Over a Thousand Hills I Walk with You is an accounting of eight-year-old Jeanne’s experience of the genocide in Rwanda. As the sole survivor in her family of five, Jeanne was also one of the few who survived from Kibungo-Zaza, the town in which she was born and raised. The story begins with Jeanne sharing her life as a child in her family’s compound, where she played with her two sisters and listened to the stories of her grandmother. As the story unfolds, readers follow Jeanne as she hears the rumors adults whisper about the violence growing around her and wonders what it means. Eventually the rumors become reality and Jeanne watches as her family succumbs to the violence targeting the Tutsi tribe within Rwanda. For two years, Jeanne is moved from place to place by caring adults who make sure she is not killed simply because of her heritage. Filled with intensity, pain, and hope, Over a Thousand Hills I Walk with You is an account of one young girl’s struggle to understand and overcome the senselessness of genocide and war.

While a memoir, the text also includes the voice and observations of Hanna Jansen who gives readers a glimpse of Jeanne as the young girl attempts to reconcile her past and present. Readers will question the reasons for genocide, and why it continues to plague our world. They will get a glimpse of life in Rwanda before the Hutu uprising as well as how people respond to war and its aftermath. Because this is a memoir, readers will also ponder how often the very youngest are the greatest victims of war. A book about survival under the most dire of circumstances, Over a Thousand Hills creates a space for contemplating civil war, political unrest and its deadly results, and how to survive when most around you do not. Thematically, other texts that could be used on a unit about war and genocide could include any number of Holocaust texts along with The Fighter (Grief, 1998), Zlata’s Diary (Filipovic, 2006), and Stolen Voices: Young People’s War Diaries from World War I to Iraq (Filipovic, Challenger & Otunnu, 2006). A harrowing, two-year account from the life of the youngest of victims, Over a Thousand Hills will keep readers thoughtfully engaged long after they have finished the book.

Hanna Jansen relayed this story as Jeanne wrestled with her own survival. Working from Jeanne’s memories, Jansen also includes a timeline of Rwandan history and a glossary of terms that include both French and indigenous phrases. Jansen and Jeanne live in Germany with 12 other family members, most of whom are war orphans.