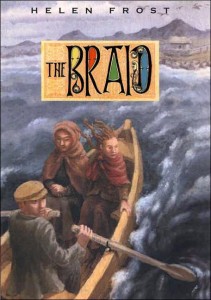 “Mussels in that bay we’re told, are bait of English fishermen, not food for Scottish children like ourselves.”

A historical novel told through the interweaving of narrative and praise poems, The Braid is set toward the end of the Highland Clearances. This story presents one experience out of the thousands involving Highlanders who were moved off the land they farmed and tended, but did not own, so sheep could be raised for greater English profit. Told in the alternating voices of two sisters, readers follow the struggles of one family separated by the Atlantic Ocean when one of the sisters decides to stay with their grandmother in Scotland while the other ventures with the rest of the family to Cape Breton, Nova Scotia. At the beginning of the novel, both sisters are expected to leave. The night before the boat sets sail, 15 year-old Sarah playfully braids their hair together, making both girls laugh. As 14 year-old Jeannie sleeps, Sarah cuts off the braid and leaves half for her sister as she slips away to hide so that she can’t be forced from her homeland. Through short excepts, the story shows how both sisters, and by extension other members of the family, learn to live in their new environments—Sarah in Scotland, on the small island of Mingulay, and Jeannie in Cape Breton. The braid becomes the central motif of those who are both woven together by love, but separated by distance and circumstance.

Written in short excepts divided by the praise poems, The Braid is a middle grade novel that will encourage readers to question not only the reasons for immigration, but the ways in which people are treated even when they have been residents of a place for generations. The characters of Sarah and Jeannie are well developed and allow young readers to think about the place of family, the necessity of relocation, and the possibility and pain of new beginnings. A novel ultimately about courage, the power of family, and the pain of separation, The Braid brings to life the opportunity for readers to develop a more comprehensive understanding of immigration, both historic and current, and of the variety of reasons for emigrating. Thematically, other texts that could be used on a unit about immigration would include Ask Me No Questions (Budhos, 2006), Kezzie (Breslin, 2002), La Línea (Jaramillo, 2002), A Step from Heaven (Na (2003), and Grab Hands and Run (Temple, 1995). An excellent use of narrative and praise poems, the forms of which are explained in the author’s notes, The Braid will also inspire young readers to try these forms for their own enjoyment.

Helen Frost relied upon the experience of her great-great grandparents’ immigration for the genesis of her story. Working with consultants from Cape Breton and exploring the island of Mingulay, Frost brings her family’s story to life for young adolescents who have little or no knowledge of the Highlands or the potato famine that caused the historic immigration numbers of the mid-19th century. Frost includes a brief explanation of the events of the Highland Clearances, but readers of The Braid will want to know more about the time period and the two settings of Cape Breton and the Outer Hebrides of Scotland.