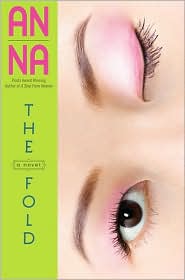 Books about Korean Americans often focus on the identity crisis between Korean and American identities or introduce struggling immigrant families. An Na’s previous novels, A Step from Heaven (2001, the Printz Award Winner) and Wait for Me (2006), fall into the later category, but her third novel The Fold (2008) makes a shift from these common topics.

Joyce is from a Korean immigrant family who owns a Korean restaurant. On the last day of her junior year in high school, Joyce wishes to get JFK’s (John Ford Kang) signature in her year book. However, it’s not even easy for her to look at his eyes. Her heart beats fast in front of him because he is so cute. Gathering her courage, she gets JFK’s signature, but not only does JFK not know who Joyce is, he confuses her with another Korean girl who is not pretty at all. It’s all about the Korean eyes, Joyce thinks. She hates her narrow and slanted Korean eyes that cannot get JFK’s attention. When her Gomo (aunt) offers Joyce the possibility of plastic surgery, Joyce starts researching eye surgery. If she has bigger and rounder eyes like Americans, will she have more confidence to talk to JFK? Will she be happier? Will her life change? Life seems unfair for Joyce because her beautiful sister Helen has everything. Helen has good looks, a brain, and a promising future. She always gets to use the car and uses the excuse of a “meeting” to get out of work at their parents’ restaurant. Joyce never gets to use the car and works at the restaurant all the time. Joyce does not know what is really going on with Helen or what she is going through as a closeted lesbian. On her journey, Joyce grows and discovers herself and her love for her sister.

An Na depicts current Korean and Korean-American culture with her rich detailed words through Joyce’s eyes. An Na’s descriptions are not from her own imagination. All of the characters are real. Not every Korean woman gets her eyes done, but it is true that eye surgery is the most popular plastic surgery among young Korean women. Like Joyce’s mom, middle aged Korean women are getting permanent eye brows or eye lines from unlicensed medical personal for a cheaper price. Along with the plastic surgery trend, the Korean society’s attitude towards homosexuality seems accurately described. Helen provides a hot topic of gossip to other Koreans because she is a lesbian. Homosexuality has not been welcomed or openly discussed in public yet in Korean society. It is rare to find gay, lesbian, transgender, or bi-sexual characters in books about Korea or Korean Americans. In fact, The Fold is possibly the first book that has a homosexual character in children/young adult literature about Korea and Korean Americans published in the U.S.

Teenagers will easily sympathize with Joyce no matter what their ethnicity. They will find similar interests, such as getting boys’ attention, concerns about their appearance, and not knowing what they want in life. Another good book with a middle school age character and a similar topic is Slant (Williams, 2008). Teachers will find that The Fold offers important discussion topics for students, such as what it means to be beautiful, how different ethnic people can be beautiful in their own way, what is most important in life, what it means to be a lesbian in our society, and other related issues. For more information about An Na, visit her website www.anwriting.com.