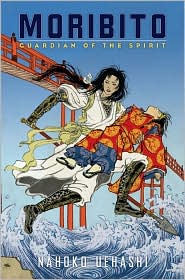 This Asian fantasy epic takes place in an imaginary country, New Yogo. The story starts with a female warrior’s rescue of the Second Prince, Chagum, when he is nearly drowned in a river. Chagum’s mother, the queen, hires Balsa as a bodyguard. Since Chagum is bearing an egg of the Water Spirit, his father, the king, attempts to kill Chagum in order to keep the secrets of the empire. Balsa and Chagum flee from the palace at night. While they travel across the country, they come to know about the spirit and the secret of the empire. If Chagum fails to carry the egg and deliver it to its home in the distant sea, New Yogo will have a serious drought. In this dangerous journey, Chagum and Balsa hide themselves from the Egg-Eater, Rarunga, and the hunters who are hired by Chagum’s own father. Chagum has to protect the egg until it hatches to save the empire from a drought that would last for over one hundred years.

Moribito: Guardian of the Spirit is a fantasy epic focused around Chagum’s quest to safely deliver the egg. The plot of the story has several conflicts among characters, but the conflicts are seamlessly connected to each other. While finding the answer to the major dramatic question, readers can learn about Balsa’s life and the secret of the empire. The story is believable because the details of the setting resemble Japan in the Middle Ages. The names of the characters and the places are from the languages of the imaginary world. Those names of characters and places are not contemporary Japanese, and the clothes of the characters on the book jacket do not seem to be Japanese traditional clothes. However, the culture depicted in the story is influenced by Japanese culture and lifestyle, as seen in some of the characters bathing in a hot spring, engaging in martial arts using a spear and swords, and interacting with the water spirit and the earth spirit.

The concepts of these extraordinary worlds are not easily understood, but the glossary of the characters, places, and terms are helpful. Until the end of the story, there is no clear explanation about why Chagum is carrying the egg in his chest. Uehashi’s writing style is easy for young readers to read. While the main character is female, male readers will be drawn to the story due to the martial arts and adventure and girls will be attracted to the strong female protagonist. The themes of this story are a non-traditional family and a strong woman’s rescue of a country. Chagum is a prince of New Yogo, but his own father attempts to kill him to keep the secrets of the kingdom. Instead of his family, his bodyguard, Balsa, and others protect and love him. The relationship between Chagum and Balsa is emotionally bonded and Balsa is portrayed as a mothering figure. Balsa’s father was killed by the king of her country due to a secret. Balsa was raised by her father’s friend. She learns that her foster father’s destiny is similar to her own, and she eventually comes to understand him. Because of her difficult life, Balsa becomes a warrior even though women were not allowed to be warriors culturally or physically in her country. Her strong image and wisdom protect Chagum and eventually save the country. Traditionally, in Asian cultures, women have not been portrayed as strong figures because of stereotypes, but the author is female and wanted to write about a strong, smart woman.

This book was originally published in Japan for Japanese readers. Uehashi did not intend to inform an outsider audience about Japanese culture, but readers can immerse themselves in a specific cultural experience through this story. In Japan there are many kinds of spirits, such as the water spirit and the earth spirit, and these are well-portrayed in the story. Other cultural experiences, such as bathing in a hot spring, riding in an ox-drawn carriage, and a warrior who looks like a samurai are depicted.

According to the author’s note, Uehashi was inspired by a movie in which a woman saved a boy’s life when they escaped from a burning bus. She wanted to write a story about a 30 year-old woman protecting a child. She came up with the bodyguard image before writing the story. That vision was drawn for the book jacket wherein Balsa is dressed like a warrior or wanderer and carrying a spear. She is holding a boy who does not look like her own son. This story is not based on experience, but Uehashi captured the images based on her imagination.

Uehashi is an author and professor at Kawamura Gakuen Women’s University in Japan, which specializes in Australian aboriginal studies. She writes unique fantasy novels from the viewpoint of cultural anthropology. Because her field of study is cultural anthropology, she believes that people universally want to tell stories of any variety and kind and are interested in writing stories. Her career as a novelist began in 1989. Moribito: Guardian of the Spirit is an Asian fantasy epic, and this first book in the series was written in 1996. It is still expanding; so far she has published ten volumes of the Guardian series, which has received many awards in Japan. This book is popular among Japanese readers, and the Guardian series volumes have been recreated as mangas and animations.

Cathy Hirano has translated several Japanese books into English. She is a two-time Batchelder winner for The Friends (Yumoto, 1998) and Moribito: Guardian of the Spirit (Uehashi, 2008). The biggest change she made while translating Moribito: Guardian of the Spirit was to add the founding myth of New Yogo. In the original, the myth was not related to the characters’ actions and experiences. Uehashi wrote a new introductory section to weave the myth into the thoughts of the young star reader, Shuga (Ikegami, 2008). One of the challenges that Hirano faced was the different style of conversations by the characters in terms of differing social status (Ikegami, 2008). In the original, the Prince Chagum speaks in a formal and royal tone, but it is hard to express the tones in English. So, Hirano did not use the contraction in Chagum’s speech in the beginning. As the book went along, the contractions were purposely used in Chagum’s speech to show that he changes to speak in the everyday language of commoners. Hirano (2006) also wrote an article on the pleasures and difficulties of translating from Japanese into English.

Based on the theme of creating a non-traditional family with emotional bonds, this book could be used along with Becoming Naomi León (Ryan, 2005) and The Graveyard Book (Gaiman, 2008). Another way to utilize this text as cross-cultural experiences is to read it along with The Friends (Yumoto, 1998), The Spring Tone (Yumoto, 1999), and The Letters (Yumoto, 2002). These three books were originally published in Japan and translated into English by Cathy Hirano. These books show contemporary life styles and cultural experiences in Japan. The second book, Moribito: Guardian of the Darkness, is scheduled to be published in the United States.

(2008, Fall). Editing YA and children’s literature in English translation: An interview with Cheryl Klein,

(2006). Eight ways to say you: The challenges of translation,

The Translation of Children’s Literature: A Reader