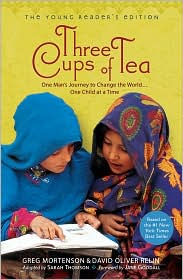 Half frozen, weak, tired, hungry, and alone, Greg made a wrong turn and lost his guide. He stumbles into a village where he begins the most inspirational adventure of his life. The women cover their faces and back away, yet the children run without fear to Greg’s side and lead him to their leader Haji Ali. Greg had fortunately learned to speak a little Balti while mountain climbing in Pakistan. Haji Ali, pushing his face in front of Greg’s, demands to know why he, a stranger, has come to Korphe. With a smattering of Balti and many hand gestures, Greg roughly explains that he is an American, and was trying to climb to the top of K2 (the second highest mountain in the world) to place his deceased sister’s necklace at the top when he became lost from his group. Now he is heading back to Askole in hopes of finding his group. Struggling, he begins to get up, but Haji Ali pushes him back into the pillows on the floor, explaining that he must sleep. Days pass and the Korphe people feed and care for Greg until he is healthy once again. Greg builds a relationship with Haji Ali and comes to admire him and his people.

When Greg is completely well and ready to return to the United States, he asks Haji Ali how he can ever repay him and his people for their great kindness. Haji Ali simply says, “Listen to the wind.” As Greg carefully listens, he hears the faint voices of children. They walk on and come upon the side of the mountain where the children gather each day to work on their lessons whether the teacher was able to come or not. The children have no school house, no desks, and no books — only the dirt on the ground where they carefully write their lessons using a stick. Greg knows the answer to his question is, “we need a school.” The rest of the book tells of Greg’s passion and drive to fulfill the dream of these kindhearted, remote people. He has spent his life traveling back and forth to the U.S., raising money for supplies and returning to build not one, but many schools, throughout Pakistan and into Afghanistan. Greg shares many of the obstacles and hardships he has had to overcome in order to carry out this mission.

Greg Mortenson co-authored three books that tell the story of his journey to change the world through schools. They are Three Cups of Tea: One Man’s Mission to Promote Peace — One School at a Time (adult version), Three Cups of Tea: One Man’s Journey to Change the World — One Child at a Time (upper elementary to young adult version), and Listen to the Wind (picture book version). Greg, an American, spent most of his childhood at the foot of Mt. Kilamanjaro in Tanzania, Africa where his father co-founded Kilamangaro Christian Medical Center, and his mother founded the International School of Moshi. He was influenced by his upbringing and compassion for the Korphe children and began the challenge of his life that involves traveling back and forth from Pakistan to the United States many times to raise money through fundraisers, conference presentations, and eventually the co-founding of the Central Asia Institute with Jeane Hoerne supplying money and Greg coordinating the jobs. They have now built over 90 schools, built bridges (both metaphorically and in reality), and laid water pipes in Pakistan and Afghanistan. Greg’s mission as he builds schools, visits the Pakistani people and leaders, and tours the U.S., raising money is to promote peace through education. Books such as Planting the Trees of Kenya: The Story of Wangari Maathai (Claire Nivola, 2008) tell of other actions in Africa to promote peace through social action. Readers might also be interested in exploring other efforts around the world that focus on providing schools, such as The Kids from Nowhere (George Guthridge, 2006) that takes place in a remote Alaska community.