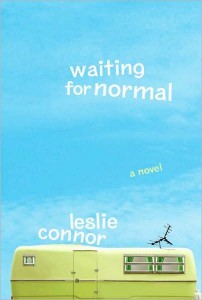 Twelve-year-old Addie dreams of a life of normalcy, one where she knows what will happen from one day to the next. She wants to be able to rely on daily occurrences like her mother, a.k.a. “Mommers,” home at a certain time, dinner at a specific hour, and enough food in the kitchen. Beginning with her father’s death when she was a toddler, Addie has experienced changes in her family life over the years including her mother’s divorce from stepfather Dwight and the simultaneous separation from her two younger half-sisters, lovingly referred to as “the littles.” Waiting for Normal underlines the cultural connections of urban northeastern communities, poverty, adolescence and disability. At the start of the novel, Addie and Mommers are struggling financially as they live in a trailer under an overpass in Schenectady, New York.

Mommers with her “all or nothing” personality is a key reason why Addie craves a normal life. On one extreme, Mommers overdoes things like cooking a week’s worth of pasta or tacos, or buying Addie inappropriate clothing for her age, like a sexy ruffled dress for her band concert. On the other extreme, Mommers is secretive and neglectful in her role as a mother, constantly chatting online, pursuing a covert business endeavor, and abandoning Addie for days at a time. Due to her mother’s sporadic nature, Addie matures quickly. She takes control of day-to-day activities and strives to see the brighter side of situations. Many caring individuals, like her neighbors Soula and Elliot, classmate Helena, stepfather Dwight and grandfather “Grandio,” are drawn to Addie’s optimism. They give Addie the unswerving care that her mother does not. At the end of the novel, Addie tastes the reliability she has been craving. She is adopted by Dwight and looks forward to her new home with him, his new girlfriend and the littles.

Written in first-person from Addie’s perspective, Waiting for Normal captures the reader’s attention with moments of laughter and sorrow. Elements of author Leslie Connor’s background are authentically woven into the setting, language and characters. For example, Connor draws upon her memories of Schenectady where she lived during middle and high school to describe the roads and overpasses that make up Addie’s surroundings. Connor also lived in Ohio where Mommers was raised and thus integrates regional Ohio language, such as when Addie mentions Mommers’ enjoyment of “hoagies” — submarine sandwiches whose name hails from Philadelphia. In addition, Soula, who is undergoing chemotherapy, has characteristics based on Connor’s friends who have battled cancer. One aspect of the book that could be expanded is the friendship between Addie and Elliot, Soula’s gay friend. Addie befriends Elliot and later meets his partner Rick, yet there is no dialogue or mention of Addie’s thoughts regarding homosexuality. We might expect that a curious twelve-year-old who has grown up in upstate New York would have more questions about gay people. Elliot weaves in and out of the plot often enough that more connections could have been developed.

The Schneider Family Book Award honors books that contain artistic expression of life with disability for children and adolescent audiences. Waiting for Normal received the 2009 Schneider Family Book Award for Addie’s experience with dyslexia. Her disability is referenced at times when Addie states that she does not have the “love of learning” and needs extra time to read, complete homework assignments and master her flute lessons. It is important to mention that her disability is not the focal point of the novel, a stylistic element that appears intentional. Instead, the story highlights Addie’s resilience, optimism and friendliness, attributes that help her to remain sane amidst personal challenges. Addie is not alone in her struggle as we see how other characters face challenges too — Soula and her chemotherapy, Mommers and her disorganization, and the littles and their separation from Addie.

Waiting for Normal is a poignant novel for the middle-school classroom. It could be paired with Becoming Naomi León by Pam Muñoz Ryan (2004) and Tending to Grace by Kimberly Newton Fusco (2004) for further discussion of themes including poverty, disability and resilience.

Further information about the book and author Leslie Connor can be found at www.harpercollins.com.