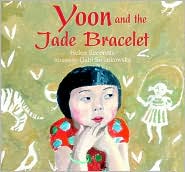 This is the most recent picture book about Yoon, a Korean American child, by this author and illustrator team. Helen Recorvits is a second-grade teacher whose family immigrated from Poland, Russia, and Ukraine. Gabi Swaitkowska moved to the U.S. from Poland when she was 17. She says that her art is inspired by Flemish painters like Vermeer and Rembrandt. In their earlier books, My Name is Yoon and Yoon and the Christmas Mitten, Yoon and her family experience social adjustments and acculturation as new immigrants from Korea to the U.S. In these books, Yoon constructs her bicultural identity as she adjusts to a new language, community, peer status and holidays. Yoon and the Jade Bracelet doesn’t focus on Yoon’s adjustments as an immigrant to the U.S. Instead, the story focuses on everyday issues such as birthday gifts, peer pressure, and relationships and the connections to her cultural identity. Yoon wants a jump rope for her birthday, but receives a Korean storybook and a pale green jade bracelet. Yoon’s mother shares her special attachment to the bracelet, explaining that it is passed down from her grandmother to her mother, and now to Yoon. At school the next day, Yoon sits beside an older girl from another class who suggests that they jump rope together and Yoon happily agrees, however, Yoon doesn’t get a turn to jump and has to turn the rope for the older girl until her arm grows tired. After jump roping, the older girl suggests that Yoon share the bracelet with her. Yoon hesitates but agrees to let the older girl wear her jade bracelet. When the girl refuses to return the bracelet the next day, Yoon goes to her teacher. The girl insists the bracelet belongs to her, but Yoon’s understandings of the markings on the jade bracelet prove that she is the true owner.

Vivid colors and a wide range of patterns are used to illustrate each character’s clothing in stripes, polka dots, and abstract prints that tend to match with the backdrop colors and patterns. The illustrations are impressionistic and surrealistic. For instance, Yoon’s hair and eye color are dark black while the manipulative older girl has contrasting light brown eyes and hair. The older girl’s facial expressions of anger and embarrassment are vividly portrayed so that readers feel as if they are facing an angry person. The portrayals of Yoon’s clothing are gradually changed over time through three books, but her facial features are consistently portrayed as a Chinese doll with a thick hair bang and short bowl-cut hair.

Cultural authenticity is an issue. First Yoon hopes for a “very special” birthday present — a jump rope. Yoon wants to join the girls in her school, yet she is too new to get invited. Jumping rope is a metaphor of peer acceptance, however, hoping for a jump rope for her very special birthday gift reminds me of my father’s childhood story that he hoped for a new pair of rubber shoes for his birthday in the1950s. Hoping for a jump rope as a ‘very special’ birthday gift may reflect a confusion of historical with contemporary Korea. Yoon’s humble wish for her very special gift doesn’t seem to reflect contemporary Korea and Korean children who would rather have a computer game or a doll house. Yoon’s request for a jump rope seems to assume that Korea is an economically struggling country or to fall back on an image of “long-ago Korea” (Sung, 2009).

Second, Yoon’s mother gives her a Korean storybook and a jade bracelet from Yoon’s grandmother. Yoon is disappointed by the birthday gift, but hides her disappointment to protect her mother, acting like a mature and polite grown-up. In Korea, a birthday gift is not a surprise, instead children advocate for what they want. In that sense, Korean children are not much different from mainstream American children in terms of taking advantage of this once-a-year opportunity. The mother’s gift comes from what mother wants to give, not what Yoon wants. Respecting children’s desires is significant in comtemporary Korea as the number of children in each family is one or two, yet Yoon is described as a polite and passive child. Perhaps Yoon’s family is conservative and traditional, so Yoon has to be polite to her mother rather than advocate for her birthday gift, but the passivity with which she is portrayed seems overly stereotypical.

Another issue is that the jade bracelet is a misrepresented cultural item. According to Yoon’s mother, “when I was a young girl, my own mother gave me this very bracelet. Now I am giving it to you.” She explains the Korean name etched inside of the bracelet which is “the dancing symbols that mean Shining Wisdom” and tells her about the symbols of green jade to create meaning and make a blessing for Yoon. Jade is a popular stone within Chinese culture where a wide range of age groups wear this stone. In Korean culture, jade is an acceptable stone to wear with a Hanbok (traditional outfit) for grown-ups. Jade is often perceived as something an elderly person might wear, but would not be chosen as a gift for young girl. Passing down a special item like a ring or bracelet would occur on a special occasion like a wedding or engagement and would not be given to a young child. The mother’s discussion about the dancing written symbols that mean Shining Wisdom and the meaning of jade and green doesn’t seem drawn from Korean culture. The dancing symbols that have meanings behind them may be closer to Chinese characters. The written language of Korea, Hanguel, is sound sensitive rather than meaning-based. Also, the way Yoon’s mother explains the meaning of the symbols and green color is not a typical practice in Korean culture. The symbolism of jade seems to be a cultural misrepresentation and an example of the assimilation of Korean culture into other Asian cultures in the U.S.

Lastly, the Korean name of Yoon is puzzling. Yoon can be a family name or can be part of a first name. The common Korean names tend to be two syllables. For instance, Yoon Hee, Yoon Ah, Yoon Ji are closer to the expected Korean name. The name Yoon sounds like either the family name or an incomplete first name unless the name is simplified. The mother addresses Yoon as “Little Yoon” but “Little Yoon” is used when two siblings have Yoon in their names. This name format of Yoon can happen but it is not common in mainstream Korean culture. Yoon’s earlier Korean writing of her name in My Name Is Yoon doesn’t have any last name or additional unit. The name seems to be “Pseudo Korean” that misrepresents the culture (Sung, 2009).

What Yoon and the Jade Bracelet conveys in terms of Korean culture and universal celebrations are still exotic features, tradition, and the colonial mindset of old traditions portrayed as contemporary. Celebrating a birthday can be a universal connection between readers and Yoon, yet the attitudes toward Korean culture stay as traditional and historical, and reflect an attitude of orientalism. This book does have a stronger approach to Yoon’s life than the previous two books, because of the focus on everyday issues such as peer pressure and intimidation. Another feature that is not typical of a new Korean immigrant is that Yoon is passive in the beginning when the older girl takes advantage of her, yet she is courageous and faces the older girl. The way Yoon takes her bracelet back shows her journey of adjustment to a new community. Yoon’s peers support her when the teacher investigates who is the true owner of the bracelet, showing that she is accepted by her peers.

This book can be read alongside other books that are about family members who pass down items that are significant to their family culture. In Always Prayer Shawl (Sheldon Oberman, 1994), Adam’s grandfather gives him his prayer shawl when Adam moves to the U.S. In The Keeping Quilt (Patricia Polacco, 1988), the great-great-grand-mother in Russia makes a quilt from the family’s old clothing. In The Name Jar (Yangsook Choi, 2001), the grandmother gives a wooden stomp to Unhei that enhances Unhei’s Korean identity and family memories.

Sung, Y.K. (2009) A post-colonial critique of the (mis)representation of Korean-Americans in children’s picture books. Ph.D. dissertation, The University of Arizona.