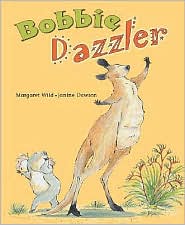 Bobbie is a wallaby with extraordinary athletic ability. She can jump, bounce, skip, hop on either leg, balance, twirl, AND stand on her head. But she cannot do the splits. Her friends Wombat, Possum, and Koala say, “Never mind,” however, it bothers Bobbie a great deal. Bobbie tries time and time again, displaying all her gymnastic talents, ending each session with yet another attempt at doing the splits. Her friends stand by, participate when they can and, most importantly, support their friend. Bobbie’s determination and perseverance pay off in the end as she is at long last successful, her friends standing in awe of her “dazzling” performance. In a last show of support, they roll Bobbie over when she finds herself stuck in the splits position, unable to move. Of course, now that they see it really is possible, Koala, Wombat, and Possum practice, practice, practice until they, too, can do the splits.

Margaret Wild has chosen a simple text to portray this personal quest of Bobbie’s, making this book accessible to young readers. This is in sharp contrast to the complexity of a child setting a goal for themselves and pursuing that goal energetically. A wallaby doing the splits is not a walk in the park. Rather it represents a fairly lofty goal as acknowledged by Wombat, Possum, and Koala in their repeated responses of “Never mind.” While this might be intended to comfort Bobbie, it may not be encouraging. The only voice saying “Keep trying” is Bobbie’s herself. Yet, in the end, once they all see the goal as attainable, the three friends also pursue that goal. Readers wonder how Bobbie will challenge herself next. Dawson’s illustrations mirror the text through her use of white space and her characterization of the four friends, whose expressions show concern, happiness, and comfort.

This story obviously comes from the land of marsupials, but wallabies attempting to do the splits are not commonly observed in reality. Even so, these personified animal characters reflect something we see in all children as they learn to walk and talk, read and write. They try and try again until they “own” the movement or the spelling or the meaning. Family and friends join in the efforts and learning becomes a collaborative process — a joyful celebration for all. Other books that speak to a developing sense of identity might be used with Bobbie Dazzler, such as Leon, the Chameleon (Melanie Watt, 2001) or Scaredy Squirrel (Melanie Watt, 2008). Also, other Australian personified animal families might be compared as found in Mem Fox’s Koala Lou (1989) or Possum Magic (1990).

Margaret Wild is a prolific writer and her books have been published in many different countries. She moved from South Africa to Australia in 1972 and is currently living in Sidney. Her books have received accolades both in the form of numerous awards and high praise in reviews. Her career began as a journalist, then children’s book editor, but her days always began in a café and a half hour of writing. Janine Dawson worked in animation for 25 years before moving into illustration. She remembers clicking with Dr. Seuss on her first encounter. Dawson states, “Simple things and humor appeal to me” and she especially likes to illustrate how children, dogs, and cats perceive the world around them.