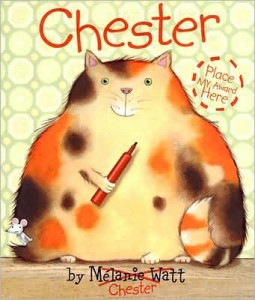 Cats are cats the world over. Some keep out of sight. Some are playful, others more sedentary. Still others have the simple expectation of being treated like royalty, seeing themselves as the only one who is worthy of attention. Such is the principle by which Chester lives in Melanie Watt’s book. The text — literally from cover to cover — records the tussle between the author and author (that would be Chester) throughout the story. Melanie begins a story about a mouse in the country and Chester, armed with a red marker, ends the story on the first page. He then proceeds with his own story making changes in illustration and text. Melanie answers back, but Chester is ever ready with marker in paw as he revises, edits, and begins anew until the squabble becomes “personal.”

Cultures that keep dogs and cats as pets and view their pets as family members can easily relate to the relationship that Watt has given her readers. It seems quite apparent that the roots of this story stem from her personal experiences with cats and the back flap confirms that Chester is a constant in her life. She artfully takes the daily encounters and small moments of everyday living to create a tale that comes together in a humorous story. Readers recognize antics that mirror their own experiences with cats or perhaps with other personalities they know. This might account for the wide appeal of this story. Young students seem to be particularly amused by the idea of making the struggle for power personal as they watch the level of the tiff escalate throughout the story. Children recognize and laugh at themselves as most have the experience of needling a significant adult in their lives to the point of exasperation. In this case, the ‘child’ (Chester) comes out on top, which receives the total approval of young readers.

After hearing the story, students bombarded the school librarian with requests for Chester. They were absolutely thrilled to find Chester’s Back (Watt, 2008) as well. This continuing saga of defiance and stubbornness reminded me of an encounter with a child registering at a new school. His mother read him the school’s code of honor, telling him he had to be good all year. He replied, “You have to be bad sometime.” Melanie Watt’s portrayal of naughty Chester provides understated appreciation and love for this conniving cat. Along with the Chester stories, the universal appeal of cats might be shown by pairing this book with My Cat Copies Me (Yoon Kwon, 2007) and A Very Smart Cat/Una gata muy inteligente (Mario Picayo, 2008).

Melanie Watt resides in Montreal, Quebec. Her career began in 1999 with an assignment in her graphic design program for which she created a book called Leon the Chameleon (2001). Her book Scaredy Squirrel (2006) has received several awards including the Ruth Sylvia Schwartz Children’s Book Award and the Amelia Frances Howard-Gibbon Illustrator’s Award.