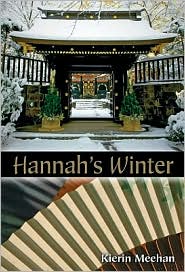 When Liana Forrester, an eccentric Australian gardening writer, goes to Japan to research her new book on Japanese gardens, she insists that Hannah, her twelve-year-old daughter, accompany her. Hannah would rather stay home with her father and brother to start the new school year with her friends, but Liana wants her to learn Japanese. In Japan, Hannah stays with her mother’s friend, the Maekawa family, while her mother travels throughout the country. Hannah is worried that the Maekawa’s thirteen-year-old daughter will resent having to entertain a young foreigner, but her fears are unfounded as she and Miki become great friends.

Shortly after Hannah’s arrival, Mr. Maekawa receives a yellow box from a friend. Hannah and Miki and Hiro, a neighbor, are intrigued by the contents of the box, which contains a child’s toy box along with other items. One of these is a poem that appears to ask for help for “the ocean boy,” a lost soul seeking peace. They set out to solve the riddle, traveling to markets, temples, shrines, and an ancient castle and meeting people from the past who aid or hinder their quest. They are also assisted by Miki’s aunt, Yukiyo, and Miki’s father, both of whom have the ability to see ghosts. By the end of the story, Hannah, Miki, and Hiro complete all of the tasks set out in the poem, which allows Kai, the ocean boy, to rest in peace. Hannah believes that her ancestor was involved in Kai’s story back in 1860 and that is why the ghost appeared after she arrived. But it is not only the ocean boy who obtains peace. Miki and Hiro get much closer on their quest to solve the riddle. The discoveries of Aunt Yukiyo’s former boyfriend and Hiro’s lost father also bring happiness.

Hannah’s naivety towards Japanese customs results in humorous moments as well as allowing a natural means for the reader to become informed about Japanse culture. Miki’s grandmother frequently catches Hannah making mistakes with the Japanese custom of “house slippers.” Her day in Miki’s school is an eye-opener for Hannah. The locations visited by the children — the markets, the Ninja Temple, the Sarumaru Shrine, the beach, an ancient castle and a mountain — also give greater insight into Japanese culture and tradition.

The story setting is Kanazawa, capital city of Ishikawa prefecture. The city sits on the Sea of Japan and is bordered by the Japan Alps and Hakusan National Park as well as the Sai and Asano rivers. Kanazawa city spreads out concentrically from the castle site, and still remains as an historical heritage around the city. The story is fiction, but the setting is real.

Meehan portrays Japanese people, food, temples, places and rivers using metaphors: a Ninjya Temple with a dramatic history, “Kenroku-en” garden in a quietly creepy atmosphere, the town is white and silent with snow, and a house in which unexplained breezes suddenly occur. Also, she utilizes Japanese terminology in introducing foods and items: Buri okoshi (yellowtail of Kanazawa’s favorite fish), kumazashi (bear fresh meat), chiyogami (decorated small origami), and shakuhachi (bamboo flute). Furthermore, she brings in Japanese phrases used in greetings, such as Ohayo gozaimasu (good morning), Oyasumi (good night), and Sumimasen ga (Excuse me). From my perspective as a Japanese reader, Meehan shows her understanding of Japanese culture because the phrases she uses in the story are significant symbols of Japanese culture and tradition in people’s lives. Readers can immerse themselves in a specific cultural experience through this story.

This book was originally published in Australia in 2001. Meehan studied at the University of Queenland, where she received a graduate degree in German and Japanese. She taught German and Japanese language lessons, and lived in Japan for several years. Meehan began writing in Esashi, a town on the west coast of Hokkaido, Japan, when she was asked to write a monthly column for the town’s magazine. She has written three books: Hannah’s Winter (2001), Night Singing (2003) and In the Monkey Forest (2005). She is a Japanese teacher in Eagle Junction State School in Brisbane, QLD, Australia.

Based on the theme of friendship, family, and cross-cultural experiences and quests, this book could be utilized along with Habibi (Naomi Shihab Nye, 1997), Becoming Naomi León (Pam Muñoz Ryan, 2005), and A Step from Heaven (An Na, 2003).