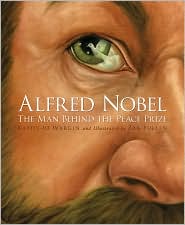 So on that very day, Alfred Nobel, the man who loved literature and poetry and the art of discovery, left a legacy to be remembered for always…

The Nobel prizes are well known, having been awarded to recipients in all parts of the world. This book provides a glimpse of how these awards came to be. Alfred Nobel, with his father and brothers, discovered the explosive nature of nitroglycerin as they tinkered around in their workshop. The possibilities seemed endless if they could find a way to safely use it. Alfred envisioned the benefits such a product could bring to the world in building bridges, roads and railroads by blasting through rock. Gunpowder was used for these purposes as well as for military weapons, but it was not a safe or reliable product.

Alfred Nobel spent hours, days and years working to find a way to safely handle nitroglycerin. He created a wooden plug filled with gunpowder that made it safer to ignite and began selling the “blasting oil” in Sweden, but the unstable material exploded in their workshop while in production and killed five people including Alfred’s brother Emil. After much experimentation, Alfred used the form of dynamite and became extremely wealthy, however, his thinking that it would prevent war was wrong. He became depressed by the destructive ways his invention was being used and the association of his name with inventions that killed. This remorse over the outcome of his work was inspiration for creating the Nobel prizes — especially the Peace Prize.

Author Kathy-Jo Wargin has created a story that some may see as over-simplified, but that presents historical facts in a way that invites questions about this man and the award that bears his name. A list of Nobel Peace Prize winners is presented at the end. The information presented in this book aligns well with information found at www.nobelprize.org, a useful site for readers interested in more detail about this award. Along with this textual multi-faceted presentation of Alfred Nobel that can be accessed by primary grade readers, the illustrations by Pullen portray Nobel’s wonderment, loneliness, and studious facial expressions. Additionally, Pullen has included “scientific notes” to accompany some of the illustrations that explain the explosive processes of Nobel’s work.

This book offers multiple perspectives of how to look at one product and opposing views of its use and value — the hope that it would bring peace and improve the world and the actuality of its destructive nature. The Peace Prize was born of hope amidst conflict and continues to offer hope to this day. Other books that might accompany this title in teaching about people whose work is focused on peace are Paths to Peace: People Who Changed the World (Jane B. Zalben, 2006); Peace One Day (Jeremy Gilley, 2005), and Great Peace Makers (Ken Beller & Heather Chase, 2008). When I Grow Up, I Will Win the Nobel Peace Prize (Isabel Pin, 2006), translated from German, humorously tells of a child applying peaceful principles to his everyday life.