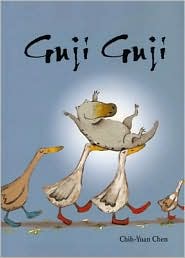 This tender story begins with an egg rolling unnoticed into the nest of Mother Duck while she’s reading. When the eggs hatch, Mother Duck has three ducklings and an odd-looking duckling (a crocodile) named Guji Guji, after his first spoken words. Mother Duck loves all four of her ducklings and teaches them how to swim, dive, and waddle. Soon afterward three crocodiles appear and try to convince Guji Guji he’s not a duck but a crocodile like them. After providing Guji Guji with irrefutable evidence, such as his blue-gray body, sharp claws, and pointed teeth that they also possess, the crocodiles convince Guji Guji to bring the ducks to the bridge to practice diving while the crocodiles wait below with mouths open wide. Guji Guji comes up with a plan to trick the nasty crocodiles and protect his family. When the crocodiles run away, the ducks celebrate and Guji Guji continues to live with them as a “crocoduck.”

This modern fantasy carries a strong message of family, love, and identity, regardless of differences in outside appearances. When Guji Guji realizes that he indeed is a crocodile, not a duck, he goes through inner conflict in deciding who he truly is and where his loyalty and heart lie. Ultimately, he chooses the love and hope that his duck family offers, not life with the mean crocodiles. In addition to the message of family love, the story will resonate with readers as they remember times they have agonized over making difficult decisions.

The author/illustrator Chih-Yuan Chen was born in Taiwan and continues to live and work there. He became interested in illustrating children’s books at the age of 19 and has published numerous other stories, many of which have been translated into other languages. His other books include On the Way to Buy Eggs (2003), The Featherless Chicken (2006), and Artie and Julie (2008).

The illustrations are done in muted browns and grays with highlights from other colors. They are created by combining rubbings, cut paper, and watercolors. The front and back endpapers show Mother Duck walking, followed by three ducklings and Guji Guji. Chen also includes information in the illustrations not mentioned in the written text, such as Guji Guji’s pull-toy and the birds that follow the crocodiles.