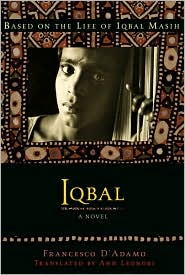 Since we shared the same fate and the same kind of life, you’d think we children would feel united, but instead we quarreled and separated into little groups (p. 25).

The children sold into bondage at a Lahore, Pakistan carpet factory work from day to day with only hope … hope that they will eventually pay off the family debt. They are expected to work without question and that one day, magically, they will be free. One day, a new worker — thirteen-year-old Iqbal Masih — joins them, and he informs them that the debt is never canceled. With this information comes conflict. Should they trust this new worker, or should they continue on as always? Iqbal, through his knowledge and his example, shows the other children that the hope of freedom resides within them, and not the man who has enslaved them. Through his courage and his understanding of the corrupt system that sold them into bondage, Iqbal encourages Fatima, the text’s narrator, to believe in hope and that freedom is something she can and should seek.

Iqbal is an inspiring story based on the real life of Iqbal Masih, a boy who escaped Hussain Khan’s Carpet Factory to seek out the help of the Bonded Labor Liberation Front, and thus produced the freedom of the children with whom he worked. An inspiring young man who spoke for the rights of children across the globe, Iqbal was honored for his efforts and then murdered in his own village once he returned from the United States. Considered a “docu-novel,” Iqbal is as much a biography as a novel about the young man who brought child labor issues in Pakistan to the notice of the world. A text suitable for middle school students, Iqbal is an appropriate introduction to the issue of child labor and the abuse of children around the world. Although Iqbal was murdered, there is only foreshadowing of his tragic ending at the close of the text. His story will engage young people, and will create a venue for more questions and research into the issue of child labor across the globe. This text also shows young readers that activism for the human rights of all people can begin at any age.

What may need to be explicitly addressed with young people is that child labor is practiced in a variety of ways the world over, and is not just a practice in Pakistan or other non-Western countries. Young people might also wish to explore modern day Pakistan and discover that it is a diverse, modern nation, and the lifestyles of Pakistani children are as varied as other young people’s anywhere. One text that would supplement this account is the Modern World Nations book, Pakistan (Samuel Crompton, 2006), which depicts the diversity of Pakistan and its people.

Appropriate complements to this text would include both fiction and informational texts. Because the issue of child labor is historically and geographically extensive, young people can read both historical and place-based texts that include child labor in the United States. Texts such as Kids at Work: Lewis Hine and the Crusade against Child Labor (Freedman & Hine, 1998) and Child Labor Today: A Human Rights Issue (Herumin, 2007) are just a couple of informational texts that could be used in a unit on child labor, along with texts on the Triangle Factory, coal mining, and migrant workers in the United States. The Breaker Boys (Hughes, 2004), Counting on Grace (Wintrop, 2007) and I am a Taxi (Ellis, 2008) are fictionalized accounts addressing child labor as well. Another text appropriate for a unit on what children have done throughout history would be We Were There, Too: Young People in U.S. History (Hoose, 2001), which presents the impact young people have had in the events of the United States.

Francesco D’Adamo lives in Milan, Italy. Iqbal is his third book for young people, but the first of his books to be published in English. Using extensive research on Iqbal Masih, D’Adamo has produced a fictionalized account of Iqbal and his quest of freedom for students in the younger grades. Little is known about Ann Leonori, who translated this text from Italian to English, but reviewers from sources such as the Horn Book, Booklist, and School Library Journal comment on the smooth translation as well as the simple, elegant prose. Leonori has worked to make sure that the translated text reflects the accuracy of Iqbal Masih’s life in a documentary style that still allows for rich dialogue and reader engagement.