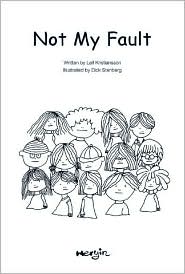 This short thought-provoking book is a collection of reasons students give to justify their lack of action when a classmate is bullied: “It had nothing to do with me!”; “I couldn’t stop the bullies all by myself.”; “I didn’t hit him first … it wasn’t my fault.”; “I always thought he was weird anyway.”; and “He should have shouted for help!” As the book ends, readers are left to contemplate the question “Does it have nothing to do with me?” That question is followed by six photographs about war, pollution, and death, emphasizing the need for readers to take personal responsibility beyond local occurrences of bullying.

The book is done entirely in black and white illustrations, with a white cover and black endpapers. Black ink drawings of the children are in the background of each page while the student speaking and the bullied child, crying and drawn smaller, are placed forward. The children’s legs are not shown in the drawings, which should also generate rich discussion.

Not My Fault was originally published in Copenhagen, Denmark. Author Leif Kristiansson is Swedish and likes to explore issues related to knowing and understanding self in his writing. Illustrator Dick Stenberg’s work frequently appears in newspapers and magazines in Europe.

The theme “Hope Amidst Conflict” resonates in the book as readers are challenged to consider their responses in difficult and tense situations and ways of taking action in future encounters. While consideration should be given on whether or how to use Not My Fault with younger children, it would work well with other books on bullying such as Wings (Christopher Myers, 2000), Say Something (Peggy Moss, 2004), and Just Kidding (Trudy Ludwig, 2006).