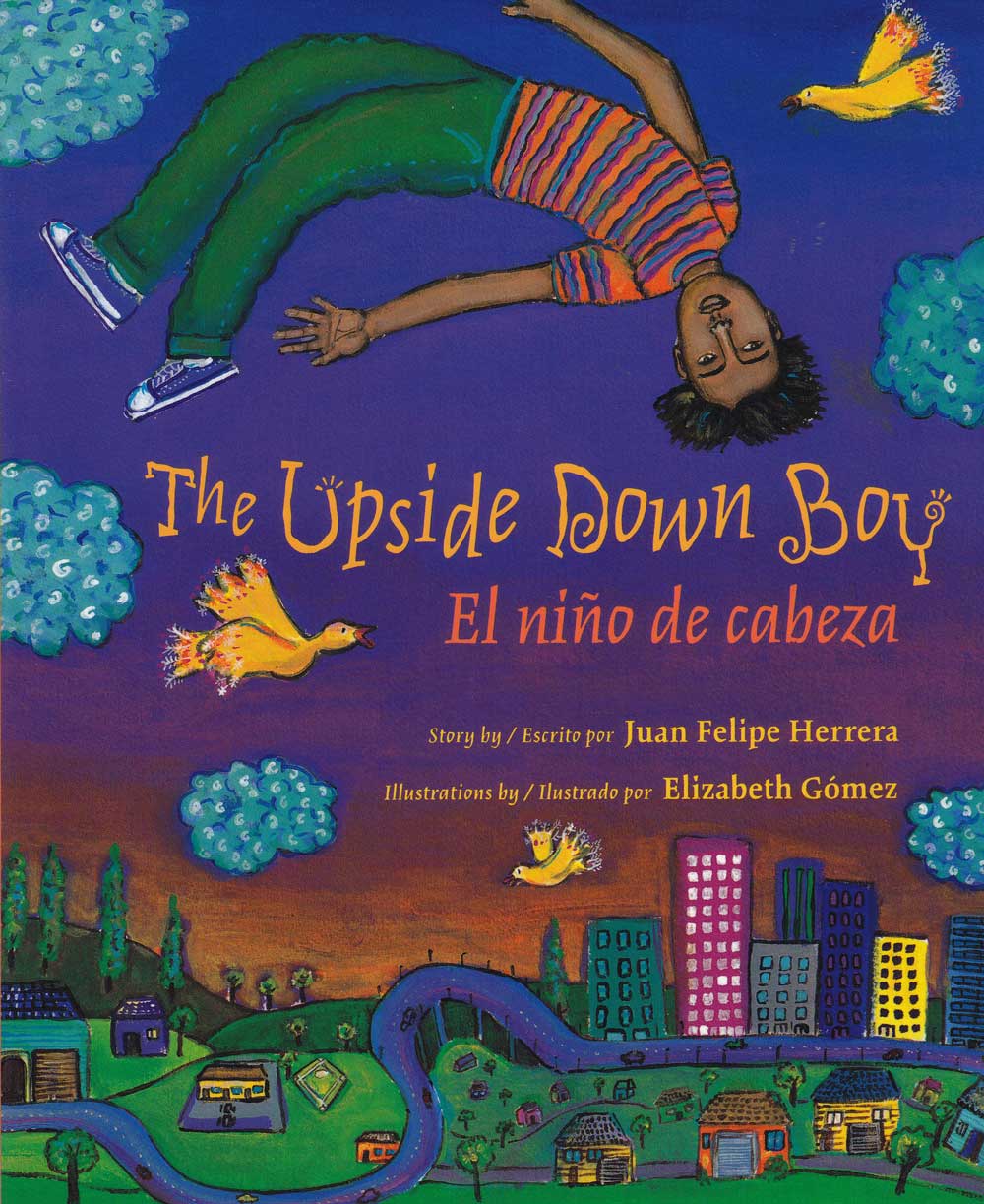 The process of acquiring a new language can sometimes be challenging, especially for a young student who has been placed into a new environment. If readers were to imagine themselves attending a school where a language other than their mother tongue is spoken, there might be moments when they feel “upside down” while adjusting into the new classroom and culture. What are ways to overcome the confusion encountered as a new student? In this bilingual picturebook, written in both English and Spanish, the author shares how he feels “upside down” in such circumstances until he recognizes the beauty in his voice when using a new language.

The Upside Down Boy / El Niño De Cabeza is based on the author’s childhood experiences when he moved to a big city for the first time with his parents, who worked as campesinos. The story is told from the perspective of the main character, Juanito, in a narrative that is poetic and lyrical, enabling the reader to understand Juanito’s emotions and his initial concerns about not knowing English. He asks his father, “Will my tongue turn into a rock? / ¿Se me hará la lengua una piedra?” (pp. 6-7). As a new student, he is unfamiliar with the school routine, so he mistakenly eats his lunch at recess and plays during lunch time. Also, he jumps when others sit, and he sits when others jump, so Juanito considers himself as “The upside down boy / El niño de cabeza.”

Although he is unable to speak English at first, the eight-year-old boy uses his experiences on farms to learn the English alphabet and words by writing his name with seven chilis. The illustrations present the letters ‘A’, ‘B’, and ‘C’ growing out from the ground with roots and leaves, showing Juanito making connections to his background knowledge while trying to learn the new language. The colorful illustrations also portray the main character’s psychological state through detailed facial expressions. There are pages that show his serious facial expressions, which portray the tension he feels when he goes to school for the first time, unable to communicate in English. There are also pages with illustrations that show Juanito’s excitement when he begins to find joy in learning English.

This book presents the process of how the author himself came to be excited about learning English. Those who encourage the main character Juanito to learn are his third grade teacher Mrs. Lucille Sampson and his parents. Their encouragement plays a powerful role which ignites Juanito’s desire to learn the new language. This points out how important the role of teachers and parents are when children acquire another language because the positive feedback they provide has a strong impact that helps them continue to study.

This book also remarkably shares the emotions and psychological mind of the author regarding how he felt while acquiring English. For those who have not had these experiences, this book will be helpful in understanding how English language learners might feel when they enter a classroom before they are able to communicate in English. There are thousands of languages that exist in the world. The differences between diverse languages and cultures at times can make one feel upside down, but learning another language enables a person to share how different language speakers can come together and create a story about their experience of language acquisition.

The Upside Down Boy / El Niño De Cabeza would make a great pair with My Name is Maria Isabel by Alma Flor Ada (1995) and The Name Jar by Yangsook Choi (2003). These books can be used together because they contain stories about students from immigrant families who begin school where a language different from their mother tongue is used and they access a new culture for the first time. The books also portray how the students feel accepted, appreciated, and eventually can have pride in who they are and where they come from when they enter the classrooms without having to lose their own culture. This is crucial for such students in order to achieve academic success as they obtain knowledge at school in a new language.

The author, Juan Felipe Herrera, is a Mexican American poet whose parents were migrant farm workers. He has versatile roles as a performer, writer, educator, activist, actor, and musician. He is currently working as a professor in the Department of Creative Writing at the University of California – Riverside. More information about Juan Felipe Herrera can be found at: http://www.creativewriting.ucr.edu/people/herrera/ and https://www.poetryfoundation.org/poets/juan-felipe-herrera.

The illustrator of this book is Elizabeth Gómez, an internationally exhibited painter who is a native of Mexico City. She used acrylic on paper for the paintings in this book, her first book for children. Her work has been influenced by popular arts from around the world in addition to surreal artists. More information about Elizabeth Gómez can be found online at: http://www.elizabethgomezart.com/ebktwvmax9z7z718fg8m425mhmfli2