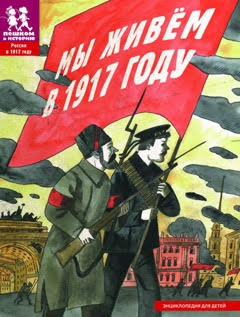 “Humanity lives by myths; one myth has always been replaced by another” (p. 5).

This quotation is the beginning of the first contemporary book about the Russian Revolution of 1917 written for contemporary children. We Live in 1917: Encyclopedia for Children by Pavel Rogozny, a professional historian from St. Petersburg who more often writes academic papers, is his first attempt to write for children about the subject he knows well. It is difficult to imagine how to tell about the October Revolution, which resulted in the creation of the Soviet Union in a form of a crossover picturebook, but Pavel Rogozny has managed to do exactly that.

Portrayals of the Russian Revolution vastly depend on who is telling the story and when. The Soviet historians and the Soviet children’s authors mostly saw the days of the Revolution as the heroic time that saved Russia from the tyranny of the tsar. The Russian émigrés in Europe and the U.S. referred to it as the most horrific event in the Russian history. After perestroika, historians and writers in Russia are trying to find new ways to tell about the past. Many contemporary Russian children’s writers strive to develop a truthful and non-ideological narrative of Soviet history appropriate to a child’s perceptions.

Pavel Rogozny’s overall goal is to be an impartial and unbiased historian. This book depicts the general condition of life in the country at the beginning of the 20th century and the development of industries, transportation, and communications. Rich and beautiful illustrations incorporate old photographs of St. Petersburg and Moscow, new big factories and poor peasants’ houses, along with ordinary families’ pictures and tsar’s family portraits. Each two-page spread bears its own theme—science, education, religion, arts, fashion, etc.

The book describes and visualizes the details of life for Russian industrial workers, peasants, and educated city dwellers. It shows clothes and footwear of different strata of population; fashions of the time for adults and for children. Another important topic is the education system in Russia of that time and who was entitled to what kind of education. The book reviews the state of the arts and literature of the epoch. To see the roots of the Revolution, the reader needs to understand the social and cultural situation in Russia of the 1910s.

From the arts and fashion, the author moves to describing the position of the Russian Empire in the World War I. Narrating victories and defeats of the Russian army, Rogozny tries to be as dispassionate as possible. He shows how the war and new technology were connected. The book portrays the achievements of the Russian science, such as the Mendeleev Periodic Table and Pavlov’s research of the nervous system as well as the great accomplishments of the Russian medicine of that time. It also talks about the discrepancy between the level of medical science and the practical condition in the hospitals.

From the pages about the history of revolutionary movements and politics of the time, the young reader will easily receive a comprehensive picture of the political divisions just before the Revolution. These are probably the most telling pages of the book. Each leader of a political party – left, right, or centrist – is portrayed with a bubble stating the main motto of his party or a movement, such as monarchists, constitutional democrats, the Bolsheviks, or anarchists.

With many details, step by step, almost day by day, the book moves the reader through the events of 1917. The February Revolution, the Tzar’s abdication, and the failure of the Provisional Government brought the country to the Bolsheviks revolt in October 2017. The Bolsheviks took power, first in St. Petersburg and Moscow, and later in the entire country. That led to the Civil War and massive immigration. The book provides compact biographies of the major players of the Revolution. Many of them were killed later; others ended up in exile.

The author consistently does not take sides. He suggests that the Bolsheviks’ slogans of ending the war and distributing the land were attractive to people, especially to poor people. At the same time, he truthfully reports how the Bolsheviks expelled many well-educated people from the country.

The book will help children get necessary information about the events of a hundred year ago. The publishing house “Peshkom v Istoriiu” (“Into History on Foot”) published a lot of books about history—from the Paleolithic times to various periods of Russian history. We Live in 1917 has two companion books, The Photographs from 1917 by Alexandra Litvina and Ekaterina Stepanenko (2017), and Walking Revolutionary Moscow by Natalia and Vasiliy Volkov (2017).