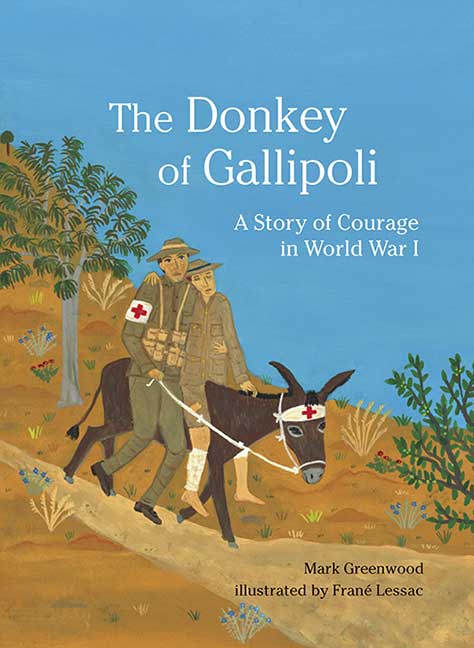 The story serves as a tribute to World War I foot soldiers and in particular to Jack Simpson, an Englishman who fought in the war as a soldier in the Australian Army. When Jack Simpson was a boy in England, he and his friend Billy earned money by giving donkey rides on the beach for a penny a ride. In the winter, Jack used his donkey and a cart to deliver milk for money to help feed his family. Jack dreamed of one day leaving his home and going “on a great adventure.” Eventually Jack left England and sailed off on his great adventure to Australia where he worked in a variety of jobs: cutting cane, driving cattle, working in a mine, panning for gold, and working on ships. Jack began to feel homesick when he heard that England and Germany were at war. Jack thought that enlisting in the army could solve his problem of homesickness. He joined the Australian Army to do something worthwhile for his new country and as an opportunity to visit England. Instead, the Australian Army sent Jack to Egypt where he trained to be a stretcher bearer and then to Turkey to join the Gallipoli Campaign. While fighting in Gallipoli, stretchers became scarce. Jack found a niche of his own, when he saw a cowering donkey on the other side of the battlefield and crawled through the battle to befriend the donkey. From that point on, the donkey, led by Jack, saved many injured soldiers on the battlefield. Jack’s heroics allow him to make an invaluable contribution to the war effort. Jack was eventually killed in battle and buried in Gallipoli in a cemetery called Hell Spit. The battle of Gallipoli is not a well-known story in the U.S. because the U.S. had not joined the war yet, but is well known in England and Australia.

Mark Greenwood stated that he has a passion for history. Two of his books, The Legend of Moondyne Joe and The Legend of Lasseter’s Reef won the West Australian Premier’s Award for children’s books. Ned Kelly & The Green Sash won the West Australian Young Readers’ Book Award, and the CBCA selected Simpson and His Donkey as an Honour Book. In 2014, his book Jandamarra, illustrated by Terry Denton, was shortlisted for a number of awards including the CBCA Eve Pownall Award, the NSW Premier’s Literary Awards Patricia Wrightson Prize for Children’s Literature and the West Australian Young Readers’ Book Awards. Mark often teams with his wife, illustrator Frané Lessac, to produce books that promote an understanding of multicultural issues, such as Drummer Boy of John John, Magic Boomerang, Outback Adventure, and Our Big Island.

Frane Lessac, a U.S. born illustrator, author, and painter, lives and works in Western Australia with her husband and children’s author Mark Greenwood. Her body of work includes over 40 children’s books many of which received awards for her illustrations. Lessac studied film at USC and UCLA. After completing her academic studies, Lessac moved from Los Angeles to the Caribbean island of Montserrat where inspired by the island’s visual beauty, she began her artistic career painting.

This true story demonstrates how one person can make a difference. Jack made a difference to the English by saving the lives of wounded soldiers unable to make it to safety on their own. This picturebook tells an inspiring story and is accompanied with beautiful paintings. The story is a fitting tribute to those who served during war. The illustrations are amazingly detailed. The illustrator uses a folkloric gouache style that is colorful and dramatic.

This book gives homage to the fallen of Gallipoli and one soldier’s unique heroics in particular. One note of caution is that as a war story, the content may not be suitable for young readers. Close examination of one scene shows army boats moving ashore under an onslaught of Turkish gunfire while a dead body floats in blood-tinged water. This story would be a good fit for older readers who have studied World War I. The story is not straightforward and includes several shifts in plot. Younger students may not be able to follow why Jack, an Englishman, who worked in Australia, enlisted in the army because of the war with Germany, sails to train in Egypt, and fought and died in a battle in Turkey. In addition, this story does not back away from the grimness of war. The complexity of the story and the realistic illustrations of war are better suited for an audience in grade 4 and above.

Other WWI books appropriate to pair with this story are The Language of Doves, written by Rosemary Wells and illustrated by Greg Shed (1996), and World War I for Kids: A History with 21 Activities (For Kids series) by R. Kent Rasmussen (2014). One book offers another personal story that connects with World War I, and the other is a nonfiction resource for World War I information.

The Language of Doves tells the story of Julietta and her grandfather. For her sixth birthday, her grandfather gives Julietta a dove. Julietta names the bird Isabella after a dove her grandfather had as a boy. During World War I, her grandfather’s Isabella carried messages for the Italian Army. Serving as a wartime messenger bird, the first Isabella received a medal for heroism. Julietta hopes her Isabella will learn to return to her when released. To the child’s disappointment, her dove always returns to her grandfather. Julietta becomes heartbroken when grandfather dies and all of his doves are sold. Julietta thinks her Isabella is among the sold doves. Julietta is surprised when Isabella flies home to her, and carries a message from her late grandfather in his familiar writing. This is not only a great story, but the book also provides information that many students may not know regarding the wartime use of messenger birds.

World War I for Kids: A History with 21 Activities offers an overview of daily life in the trenches, and how new weapons technology changed modern warfare. Through text and pictures the author addresses a wide array of topics, including: causes of war, public reaction, war tactics, animals on the battlefield, the role of women in the war, and the role of African Americans in the U.S. military. The text provides a great deal of appropriate historical information for elementary students, but the combat related images are graphic.