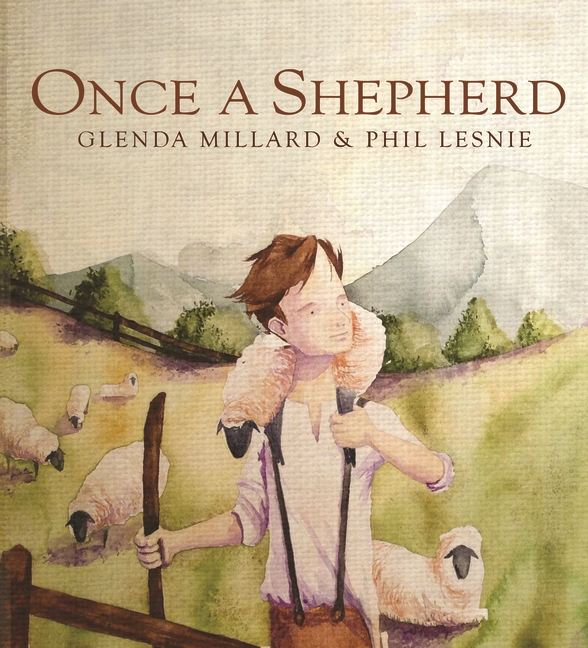 Prior to World War I, Tom Shepherd, a young shepherd, tended his flock and felt at peace with the world. He was in love with Cherry, his sweetheart, and had plans to settle down with her and continue his life as a shepherd. Tom and Cherry married and soon had a child on the way. With the onset of the war, however, Tom must leave the peace of his home life and enter a world of conflict, pain, and fear. He never sees his unborn child, nor his wife again. What he does see is the hell of war, and when he stops to help an enemy soldier on the battlefield, he is shot and dies.
The enemy soldier takes Tom’s coat, lovingly stitched by his wife, and returns it to Tom’s family as a way of repaying the care Tom gave him on the battlefield. Cherry takes material from the coat and makes a toy sheep for the child Tom never saw. Once again, there is peace in the world.

This is a subtle, but profound, picturebook illustrated in a palette of muted watercolors. The soft greens and blues of life before and after the war are juxtaposed with the darker palette of the battlefield representing the disruption war creates to the lives of those affected by it. The strength of this picturebook is the simplicity of the written text as well as the illustrations to show how war damages not only those who go to battle, and the land involved as the battlefield, but the entire families of those who must serve in the military.

The manner in which the text presents the disruption of war on a peaceful life and world landscape–and the missing Tom Shepherd at the end of the story—represents both the senselessness of war and the hope for peace that does not require the sacrifices of young people in events that often seem absurd. Appropriate for all age groups, this picturebook would make a great introduction to the study of World War I itself, but also any historical (and current) conflicts. Infused with humanity through the love of Tom’s family life, but also his actions on the battlefield, this is also a wonderful tool for thinking about the concepts of the other, drawing “sides,” and the enemy.

Books to complement this text include In Flanders Fields: The Story of the Poem by John McCrae (Granfield, 2014) and The Great War: Stories Inspired by Items from the First World War (Kay, 2015). For readers interested in books about horses and war, there is also The War Horses: The Tragic Fate of a Million Horses in the First World War (Butler, 2011) or The Donkey of Gallipoli: A True Story of Courage in World War I (Greenwood, 2008), both of which reinforce the senselessness and destruction of war. For older readers interested in how World War I started, read the graphic novel Terrorist: Gavril Princip, the Assassin Who Ignited World War I (Rehr, 2015).

Author Glenda Millard is writer for young people who lives in Victoria, Australia. She reports that she accidentally became a writer when she was 45. She has written a number of books for young people, and more information about her and her books can be found at her website: glendamillard.com. Illustrator Phil Lesnie is based in Sydney, Australia. More can be found out about Phil at Goodreads, Linkedin, or his Facebook page. His other works include A Soldier, A Dog, and A Boy (Hathorn, 2016), which can be found in the U.S.