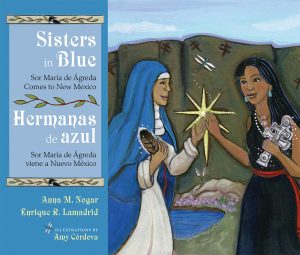 “Maria cultivated hope in the same way she grew the flowers in her garden” (p. 5).
“You are the flower of our youth, of our new beginning” (p. 14).

This bilingual Spanish/English book with occasional usage of Indigenous words from New Mexico is a retelling of the legend of Sor María, focusing on the historical background of two strong female characters, María and Paf Sheuri. It incorporates the accounts of Sor María’s travels via bilocation (being in two places at the same time) which assisted in establishing a relationship between the Indigenous peoples of central New Mexico, the Jumanos at Cueloze, now abandoned. The events of this text take place on June 23, during the Fiesta de San Juan in Spain, on the Midsummer Feast in New Mexico in the early 1600’s.

This text is constructed with very specific intentions by the authors. The first nine pages are dedicated to orienting the reader to the historical facts framing this story of two strong women who share similar views of hope and longevity for their respective people and communities. The rest of the text mingles their individual experiences during their own community feast days until the point when they are brought together to share a conversation about their concerns for the future. In presenting this text to modern readers, an Acknowledgement and Editor’s note precedes the story. The authors make clear, “our aim for this story is to tell a tale of communication between cultures and languages. The bilingual format puts two colonial languages – English and Spanish – side by side” (p. x). Following the story is a supplemental essay by Nogar, a bibliography for further research, and a glossary of words used with their current language and source language denoted.

The look of the text clearly takes into account the language concerns of the authors. Each page sets English in the left-hand column and Spanish in the right-hand column to give the reader a balanced representation of these languages. Additionally, they use Spanish with direct translation occasionally in the English portion, as well as words from the Tomprio, Southern Tiwa, Northern Tiwa, Tewa, and Keres languages, in order to “honor the Pueblo heritage, language, and history of New Mexico” (p. X). Nogar and Lamadrid further explain, “in our contemporary linguistic landscape, English dominates and subordinates the languages that surround it in true imperial fashion” (p. X). It is worth noting the Northern Tiwa language spoken in Taos Pueblo does not have an agreed upon written version nor orthography and is considered sacred by the people who live in Taos Pueblo.

In an interview with Baccin (2017), Nogar and Lamadrid explain the historical background of this text. While it may seem fantastical that Sor María was able to use bilocation to communicate with communities in the Southwest, there is ample documentation that she provided to the Catholic Church; in fact, “the inquisition examined Sor María twice because they had doubts about this mystical travel” and found her claims to be true. Nogar states, “what we present of her comes from the history that we know about her. She turned out to be a very prolific writer during her lifetime” and even had dealings with the Spanish Crown. Through the interview, Lamadrid states that they “developed the story, and a lot of the details, from the archeology and the ethnography of these pueblo people at Cueloze.” One of the most enjoyable parts of the research process for these writers was developing the respective menus of the feast days.

There is a great deal of careful research that went into the writing of this text and the authors view the focus of the book as language recovery, saying “It is about bringing these stories to light that we can learn so much from…and this is what joins us to pueblo people, as well, they are very, very, concerned with language loss, as we are, and they are working very, very, hard on it and this is a story that is very attractive to pueblo people because it shows them in such a positive light” (Baccin, 2017). The authors agree, “it is a story about the conquest. But [they] have brought it down to earth, and decolonized it as much as [they] could. Not to change it, but to show how important communication [is] between cultural groups.”

In an email conversation with Lamadrid and Nogar, I asked the authors what they enjoyed most about the research and writing process for this book. Lamadrid (personal communication, February 7, 2018) said, “What I enjoyed the most is the longevity of a personally and intellectually rewarding project twenty years in the making. It began in 1998, New Mexico’s Cuartocentenario, when Anna was my undergrad student. Now she is my colleague – a very long journey! As Nuevomexicanos and Hispanistas (students of the Spanish language and Ibero-American cultures, including our beloved Nuevo México), Sor María’s visits validate for us what we already know – that New Mexico is a special and very spiritual place.”

Nogar (personal communication, February 7, 2018) followed this statement by saying,
“I loved working on this book both for the reasons Enrique mentioned earlier (it really did start out as a term paper for Enrique’s class in 1998!) and also because Sor María de Jesús de Ágreda has been my primary academic research interest for many years. I wrote a Master’s thesis and doctoral dissertation on her presence in New Spain (Mexico and the Southwest) from the 17th century on and have recently completed a book on her that will published in June with the University of Notre Dame Press [called] Quill and Cross in the Borderlands: Sor María de Ágreda and the Lady in Blue, 1628-the Present.”

Amy Cordova (personal communication, February 11, 2018), an award-winning illustrator known for her accuracy of cultural context and the illustrator of this text, stated, “In all of the books I prepare my mind, hand, and heart. It is imperative to the story and to me personally, that I depict as many aspects of the tale, as authentically as possible. The historical context, clothing, landscape, architecture, and small details, must reflect the period in which the story takes place.” I find her illustrations to be an emotionally expressive companion to this complex story by Lamadrid and Nogar.

This text deals with the issues of colonization of the Indigenous population in New Mexico by Spanish Conquistadors from a unique perspective. Lamadrid states, “the story is all involved with the great historical trauma of the entrance of Coronado. He came on a feast day in Zuni and he killed all of their priests on their feast day. And so a lot of those people moved to Cueloze to get as far away from Zuni as they could” (Baccin, 2017, np). Sisters in Blue/Hermanas de azul includes the pain of colonization through the representation of warfare, fear, and loss of life. Yet the story focuses on the legend of a Franciscan nun who traveled across space and time from her convent in Ágreda to visit with the people of the Southwest in order to introduce them to the teachings of the Holy Roman Catholic Church (Mary of Agreda, 2011, np).

As a work of historical fiction, the text brings the reader an understanding of deep spiritual connection for both of the female protagonists. María is youthful, curious, and invested in a sense of service to both her community and her religious beliefs. Paf Sheuri is reflective, hopeful, and protective of her sense of community history and ways of being. When they meet, they are surprised at how well they understand each other. They share stories of their origin and discuss the things they have in common. Together they are in a moment of time when history and action is suspended.

The most successful aspect of the text is the manner in which the audience is considered. This is not a religious retelling of a story, nor is it whitewashed with current dominant culture and language features of English. Instead, this text is gentle in its treatment of the historical value of this legend and the fictionalization the legend brings to the text. While one would be remiss not to know the story of biolocation and the importance of Sor Maria’s to the Kingdom of Spain, one does not need to know this in order to value the idea of two cultures meeting in genuine and mystical ways, in order to understand and share their values of community and family. This text intertwines colonizer and colonized with a female perspective seeking unity, courage, and collaboration.

Texts like Sisters in Blue/Hermanas de azul, which would appeal to readers are: Juan the Bear and the Water of Life/La Acequia de Juan del Oso by Enrique R. Lamadrid, Juan Estevan Arellano, and Amy Córdova (2008); The Mother Ditch/La Acequia Madre by Oliver LaFarge and Karl Larsson (1978); Cuentos de Cuanto Hay/Tales from Spanish New Mexico by J. Manuel Espinosa (Transcriber) and Joe Hayes (Editor and Translator, 1998); and the English book The Boy Who Made Dragonfly: A Zuni Myth retold by Tony Hillerman (1993). These books give readers an understanding of the cultural values and heritage of the Hispanic people of New Mexico. Additionally, Nogar’s forthcoming book written for adults, Quill and Cross in the Borderlands: Sor Maria de Agreda and the Lady in Blue, 1628 to the Present (2018), may be of particular interest to those who enjoy Sisters in Blue/Hermanas de azul and want to learn more about this fascinating historical figure.