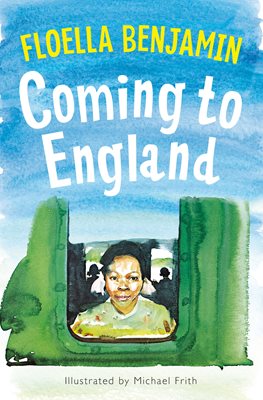 This memoir is about the author’s relocation from her home in Trinidad, an island in the Caribbean, to England. Benjamin writes about her colonial experience, illustrating the importance and power of family in overcoming challenges, as well as the identity crisis West Indian children face when they attempt to integrate into British society but find themselves as the “Other.” Floella, the narrator, is one of six children from the tight-knit Benjamin family that is split up for close to two years when their parents migrate in search for economic uplift.

The story is set in the late 1950s to 1960, shortly before Trinidad gained its independence in 1962 from the United Kingdom–the Mother Country. During this time, England welcomed people from their commonwealth to live as citizens in England because of the depletion of the workforce after World War II. Coming to England is told with passion and verve. Readers get a true sense of the author’s love for her homeland through the colorful words used to describe Trinidad and its vibrant culture. In the first five chapters, readers learn about life in Trinidad through the eyes of a child. From education, to food, to carnival, to religion, Floella intrigues readers with her happy, idyllic life in Trinidad. So, when Floella overhears her father talking about leaving for England to make a better life and pursue his goal of being a musician, she is unpleasantly surprised. In the remaining ten chapters, she details her family’s separation and relocation to England. The separation is hard for the children, and Floella describes a very unhappy time in her beloved Trinidad as through child shifting, she and her siblings stay with various family friends who mistreat them. When they are finally sent for by their parents, readers sail on the Spanish ship with the four siblings and other West Indians from different islands on their way to the ‘Mother Country’, a process described by postcolonialist Louise Bennett as “colonization in reverse.”

Upon arrival in England, Floella finds herself utterly disappointed by the grim, grey weather, the unwelcome interactions and “Othering” by the British. At school, she has to assimilate through language as she is forced to speak with a British accent instead of her Trinidadian accent. She learns about racism and experiences it through her teachers and schoolmates, but her biggest culture shock is the food at school in stark contrast to what Floella was accustomed to eating in Trinidad. In England, Floella finds herself navigating a double identity—British at school and Trinidadian at home. Floella hybridizes to survive—a common practice among West Indians who often suffer from double personality when they migrate. Additionally, Floella’s strong and supportive family unit provides a cushion for hurt and becomes a source of motivation as Floella and her siblings rise above cultural, economic, and racial challenges to become successful, positive individuals.

Integral to the story are the watercolor images by Michael Frith. Congruent with Floella’s happy life in Trinidad, the brightly colored images of Trinidad’s food, culture, and environment capture the carefree lifestyle Floella experienced as a child. Likewise, Frith represents Floella’s unpleasant experiences in England using darker, less expressive colors. Some images contain lines that symbolize confinement—an emotion that Floella was free from in her homeland. Frith’s illustrations contextualize significant moments in the narrator’s life and visualize her journey from Trinidad to England.

Benjamin’s republished memoir is a relevant text to the present culture of globalization in the 21st century. It portrays the intricacies and nuances of immigration that still impact immigrant families today. Importantly, Benjamin’s memoir is a reminder of the Windrush Generation—the first groups of Caribbean people who sailed on the German ship, Empire Windrush, from their islands to the “Mother Country” in the hope of securing a better life. These immigrants played a significant role in the development of Britain from the 1950s onwards. Additionally, this republished version of Benjamin’s story contains a note from the editor that provides historical information about the time period the book represents, making the memoir not only entertaining but also informative. Benjamin’s memoir details the resilience of Caribbean people and their motivation to conquer their obstacles.

Books that complement this text include Barrel Child by Pamela Marshall (2011) and When I Was Puerto Rican by Esmeralda Santiago (1994), both of which show the effects of immigration on children of similar age groups, along with the trauma of being separated from the family unit and the difficulties of assimilating in a new culture. Floella Benjamin is an actress, writer, producer, presenter, and an advocate for the welfare and education of children. She was born in Trinidad in 1949 and moved to England in 1960. She is well known for her shows on BBC’s children’s television: Play School and Play Away. Benjamin has received a Special Lifetime Achievement BAFTA and OBE for her children’s programs, and she was appointed Baroness in the House of Lords in 2010. She received the J. M. Barrie Award by Action for Children’s Arts for her ongoing contribution to the lives of children through her craft.

Michael Frith is a watercolor illustrator who lives on the south coast of England. He has done national and international work in newspapers such as Newsweek, Time Magazine, The Times, and The Sunday Times. He has produced twenty-five solo exhibitions, some of which were in London; the most significant at Smith’s Gallery.