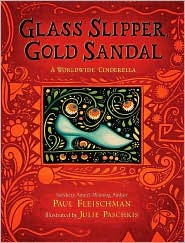 “And on the girl’s feet appeared a pair of glass slippers…diamond anklets…sandals of gold” (np).

Most people around the world have heard the story about a young woman who endured harsh mistreatment from her stepmother and was rewarded for her kindness by marrying a man from a wealthy household. There are multiple versions of this story from culture to culture, and many involve the main character losing a slipper which a prince uses to find the shoe owner to make her his bride. This fairy tale has been popular since long ago. Depending on the variation, the protagonist’s name is different; however, many people today describe such tales as a ‘Cinderella story.’ Although every version appears to be similar, the variations contain diverse cultural and global aspects.
In Glass Slipper, Gold Sandal: A Worldwide Cinderella, the author creates his own retelling of the tale, intermingling parts of the plot across seventeen cultures. The book tells how a widower’s daughter suffered cruelty by her stepmother and two stepsisters, but she maintains kindness. Her stepmother and stepsisters attend a ball, but the widower’s daughter receives help that enables her to meet a handsome young man who eventually marries her. The plot briefly interweaves the variations from seventeen different cultures throughout the story, while the bright and colorful illustrations portray each culture in visual panels that match the culture highlighted in each section of the plot.

Both the author and the illustrator show how the well-known Cinderella story crosses global cultures. However, there are some problems regarding the texts and illustrations in this version. Although the idea of weaving seventeen cultures together into one story is creative, the method used to portray each culture is quite vague. The texts do not provide the names of each protagonist in the book, so if the reader has read Cinderella, they might remember each main character as Cinderella from another country or region. When a reader opens the book, the dust jacket does mention six names of the main characters from different versions, but their nationalities are omitted, so it is unknown where each protagonist originated. This also might cause the reader to generalize each version by assuming they have the same plot because only pieces of the cultural variations are put together into one tale which focuses on Cinderella. The rich and vibrant illustrations on each page represent a scene from another culture, but how they are relevant to each culture is not addressed. Also, the country or region names are written on the background of each illustration in the same color as the background, so they are not always noticeable. Overall, the reader is able to have a glimpse of each culture, but not in depth.

Another problem regards the cultural authenticity of the Korean version of the story. Although parts from the Korean variant appear only three times in the plot, two are portrayed inaccurately. The text implies that the main character has more than one stepsister, but in the original Korean variant Kongjwi Patjwi, the protagonist, whose name is Kongjwi, only has one stepsister called Patjwi. The illustrations also have two unhappy characters who appear to be her stepsisters in the scene where Kongjwi tries on the slipper. Moreover in this scene, Kongjwi is portrayed as wearing a traditional outfit with multicolored sleeves and a bright red dress instead of rags when she tries on the shoe. The drawing of her long black hair is not in braids, which is inauthentic, because in Korean culture hairstyles represent marital status. During the time period of the Joseon Dynasty when the Korean variant takes place, long hair that is completely untied as in the illustration was actually for a funeral.

Nevertheless, Glass Slipper, Gold Sandal: A Worldwide Cinderella would make a great pair with Cinderella Stories Around the World: 4 Beloved Tales (Multicultural Fairy Tales) by Cari Meister (2014), Cinderella Tales from Around The World by Ila Lane Gross (2001), and Cinderella (The Oryx Multicultural Folktale Series) by Judy Sierra (1992). Other cultural versions that are not included in these collections such as Sootface: An Ojibwa Cinderella Story by Robert D. San Souci (1994) and Kongi and Potgi: A Cinderella Story from Korea by Oki S. Han and Stephanie Haboush Plunkett (1996) would also make excellent additions. Furthermore, it would be helpful for educators to ask students to share what they know of various versions and variants so they can bring their expertise and enrich their knowledge of global cultures in the classroom through discussions regarding these stories.

The author of Glass Slipper, Gold Sandal: A Worldwide Cinderella, Paul Fleischman, grew up in Santa Monica, California. He received the Newbery Medal for Joyful Noise: Poems for Two Voices in 1989 and a Newbery Honor Award for Graven Images (2005), in addition to the Scott O’Dell Award for Historical Fiction for Bull Run (1995). He was the United States’ candidate for the international Hans Christian Andersen Award in 2012. He currently lives with his wife in Santa Cruz, California. More information about the works by Paul Fleischman can be found online at: http://www.paulfleischman.net/

The illustrator, Julie Paschkis was born in 1957 and grew up in Pennsylvania, near Philadelphia. She has been painting and illustrating full time since 1991. She attended Germantown Friends School, Ringerike Folkehogskole in Norway, Cornell University and the School for American Craftsmen at RIT. Currently, she lives in Seattle with her husband. More information about Julie Paschkis can be found at: https://juliepaschkis.com/