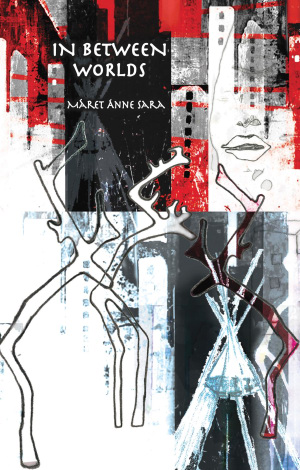 Written for young adults, In Between Worlds by Máret Ánne Sara, is an English language translation of a Sámi language text. This text is a blend of realistic fiction and fantasy that tells the story of teenage siblings Sanne and Lemme. The two teens are trapped in a fantasy version of Sámi folklore while the realistic fiction portion portrays their struggle to understand the colonization that is occurring due to the encroachment of a motocross park on reindeer migration lands. Through a terrifying transformation, Sanne and Lemme learn how to co-operate with one another and navigate their cultural heritage in order to return to their reality and understand that there must be harmony between the reindeer herds and modern technology.

Author Máret Ánne Sara expects her readers to understand that Sanne and Lemme are Sámi people living in a time and place where the balance between traditional and modern life brings daily questions. The survival of both cultural inheritance and heritage are challenged by, what the Sámi consider to be, colonizing forces. As cultural outsiders, readers need to understand that the Sámi in this text are considered Reindeer Sámi and are historically nomadic and spread over the nation states of Norway, Sweden, Finland, and the Kola Peninsula of Russia. The Sámi people live in a large and rough terrain, with nine languages and one creole language, all of which are so distinct that the Northern and Southern languages are not understandable to each other.

This book deals with issues of colonization by outsiders to the traditional life ways of Sámi reindeer herders. The motocross track represents the development corporations that seek to utilize the lands within nation states without taking into consideration the husbandry of the ecology of those lands represented by the reindeer herding and native fishing industries. At risk is the native way of being for an entire cultural group as both their culture and language are in danger of being subsumed by the encroachment of corporations within these nation states, as well as the nation states themselves.

Sara’s views on what it means to be Sámi in a modern world are evident in the story. In writing this text she relied heavily on her traditional knowledge, “Everything has a spirit in the Sámi cosmovision, the Earth, the animals, everything. From the reindeer we get everything we need; food, transport, clothes. The animals depend on nature for their survival and so do we. That is why they are so key and why all is connected in a circle.” She goes on to explain that “reindeer herding is linked to a linguistic abundance. Think of the hundreds of words we have for snow, a different one for every tiny difference in temperature which means a different snow structure which might mean we have to change our herding plans” (Coster, nd).

In writing In Between Worlds, Sara used her own knowledge of the Sámi culture as part of her heritage. From her perspective “we urgently need to go into a process of decolonization. All this education through western systems changes our way of thinking without us even realizing it. It is time to be critical, take a step back and analyze things from a Sámi perspective again” (Coster, nd). The text gives readers an understanding of the importance of reindeer herding to the Northern Sámi, not only in terms of the economic or sustenance benefits, but also in terms of the deep connection that the Sámi have to the animals in a spiritual way.

As a blend of realistic and fantasy fiction, the characters convey a jovial, contentious, and teasing brother-sister relationship. They also convey their own internal conflicts and fears to the reader in an honest and understandable manner. They work in tandem with one another and when Sanne needs Lemme he is there for her. Of several adult characters, Bigga is the one who figures most prominently and she is an old, wise, ulda-woman who serves as their spirit guide between this world and the underworld where the ulda-people dwell. Bigga helps Sanne and Lemme focus on the lessons they need to learn in order to come back from the chapadat (a place of darkness and entrapment) with an understanding of their Indigenous heritage and a desire to live a more traditional lifestyle amidst the convenience of technology and modern ways.

In Between Worlds is a modern story of cultural myth and belief. This text is a strong representation of culturally authentic beliefs and is translated with the intention of keeping the Sámi culture at the front of the readers mind. Bigga tells Sanne and Lemme, “the ulda-world is just as real as the human world. We live side by side but can’t see each other. We’re connected, but most of us don’t know it” (p. 105). For an outsider to the culture, the moments are in every aspect and woven into the story in such a complex and meaningful manner: we learn of the importance of the ulda-reindeer (the white reindeer), leaving knives in the Artic landscape, how to treat a myling (children who have passed unbaptized), and the ways of everyday life.

The most successful aspect of the text is the way that myth, culture, and storytelling are woven together. The reader learns enough about the challenges that modern Sámi face in maintaining their cultural heritage and inheritance to make them want to learn more about these Indigenous people. The characters are crafted in a realistic way, and the magic of the text feels like something that could happen. Sara offers lessons that we can learn from ourselves and the reader is left wondering about how to connect in a deeper manner to the natural world and the relationships they share with people.

Sámi literature translated into English is difficult to come by, but one useful source is a website called: Back Home Books: Finnish, Swedish, and Sámi Books, http://www.backhomebooks.net/saami-books. Other young adult Sámi books that may interest readers are: The Most Beautiful Dawn by Elle Marja Vars (2013), and Antiphony by Lila Stien (2006). These books also convey the culture and beliefs of these Indigenous people from the north.

Máret Ánne Sara is a writer, artist, and activist. She lives and works in her Arctic home town Guovdageaidnu (known as Kautokeino) in Norwegian. She says that “The Norwegian way of thinking is very different from the Sámi way, and often we are taught to believe that our own way of reasoning, thinking or acting, is wrong” (Coster). In Between Worlds, originally written in Sámi, was nominated for The Nordic Council Children and Young People’s Literature Prize in 2014.