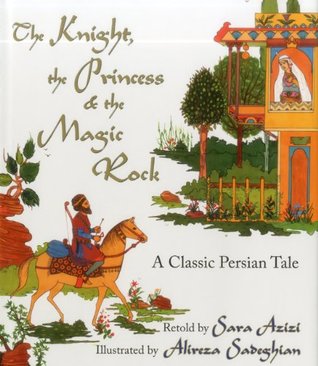 This picturebook presents a classic Persian folktale of two young adolescents of royal class who face a big obstacle that keeps them from being together. At the beginning of this book, a grandfather shares this folktale with his grandchildren to introduce Bijan and Manijeh. Manijeh is the princess of Turan and Bijan is a knight who fights for Turan’s enemy kingdom. The two cross paths one day and naturally fall in love. Their love is not approved by their Manijeh’s family since Bijan is from an enemy kingdom. However, they believe that their love is strong enough to overcome anything. Manijeh secretly has Bijan drink a magical potion that puts him to sleep so that he can be carried to her father’s palace without suspicion. Their love faces another hurdle when the king discovers Bijan and becomes enraged. He has Bijan stuffed into a large pit that is covered with an irremovable magical rock. Princess Manijeh is completely devastated and is banished from the palace for betraying her father. Eventually, the king of Persia discovers the events in Iran and has another knight, Rostam, go to Bijan’s rescue. Rostam finds Bijan and begins praying once he realizes that the rock cannot be removed. The power of his prayer lifts the rock and frees the brave knight. Bijan and Manijeh are finally able to rejoice and get married. The story ends with the two children begging their grandfather for more Persian folktales.

As a Persian American, I heard this classic folktale as a young child. This retelling accurately portrays the tale of my childhood. Books that would pair nicely with The Knight, the Princess and the Magic Rock would be The Legend of the Magic Carpet by Tomie DePaola and illustrated by Claire Ewart (1993) and Ali Baba and the Forty Thieves by Claudia Venturini (2008). These books can be used together because they share a classic Persian folktale origin that can be relatable to Persian American students. The books also highlight a protagonist or multiple protagonists who overcome some sort of difficulty in their journey, a theme relatable to all students who encounter some sort of hardship whether they are Persian or not.

Azizi is an award-winning author that grew up surrounded by literature at a very young age. She loved to write stories and act them out with her family when she was a child. Azizi was born and raised in Iran, which heavily influenced her writing. She continued her education when she moved to Canada with her husband. Her studies included different languages, like German and Latin at the University of Toronto. Azizi focuses on writing literature that is centered on Persian culture.

Alireza Sadeghian, the illustrator of this classic children’s book, is Iranian as well. Sadeghian is half Persian and half Arabic. This adds to his understanding and the authenticity of his knowledge of Persian clothing, historic sites, and styles in The Knight, the Princess and the Magic Rock. The author’s and illustrator’s backgrounds help them depict this classic folktale in its original Persian manner and style. Sadeghian continues to live in Iran with his wife and two children. He knew that he wanted to pursue illustrating children’s literature when he began to teach elementary art. Sadeghian was particularly inspired by the simplistic point of view that children had when it came to creating their interpretations of art. His main goal for his illustrations are to depict and preserve different cultural heritages for years to come.