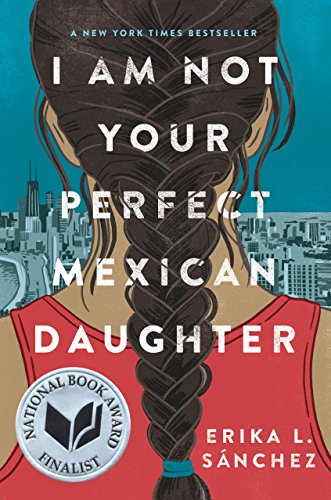 Julia, not Joo-lee-uh, is a senior in high school in Chicago with plans to attend college in New York and become a writer. She is not a perfect Mexican daughter, like her dead sister Olga. Olga was 22 when she was hit by a bus crossing the street while texting. Their parents approved of Olga working in an office, taking one class at a time at the local community college and helping the family cook and clean. Olga’s top social event was an occasional movie night with a girlfriend. Julia thought Olga’s life was dreadfully boring, until Julia discovers a hotel key, the sexy thong underwear and several emails of meet-up plans Olga had with a mysterious man.

After Olga’s death and Julia’s discovery of Olga’s secret life, Julia is surprised that she did not know her only sister better. Ignoring her own grief, Julia is consumed with finding answers. She cannot share her suspicions or findings with her parents since Olga was practically a saint in their eyes. Besides the grief, Julia’s stressors include others typical in the senior year–college applications, studying, friendships, alcohol, marijuana, hookups and sex, and the reader cringes at times while she clumsily navigates them. Yet, her greatest perceived stressor is her suffocatingly nosey and strict Mexican mother, Amá, whose grief is so overwhelming that she fails to hide that she blames Julia for Olga’s death, while always pointing out Julia’s multiple shortcomings.

Julia’s focus on searching for answers about Olga, a brief romance with a rich white boy and the loyalty of her best friend fuel her for a short time. Despite the distractions, despair eventually envelops her. After her suicide attempt, her parents respond appropriately by seeking medical intervention and low-income accessible counseling to address her anxiety and depression. Culturally believable, Amá and Apá send Julia to Los Ojos, Mexico, to stay with her abuela and tías, who simply plan to love Julia so much that her sadness disappears. Despite apprehensions that Mexico will derail her future plans of graduation and college due to absence, Julia ultimately is pleased that the two weeks she spends there allow her to relax, regroup and discover more about her parents and the luxuries she enjoys living in a tiny apartment in Chicago. In what seemed like another life, stoic Apá was a talented artist before his monotonous factory job in the U.S.; beautiful Amá endured a rape at their second attempt crossing the border. Los Ojos is a town with drugs, crooked police and danger after dark. Indeed, Julia’s time in Mexico allows her to see her parents with a fresh, adult perspective. Julia acknowledges her parents’ sacrifices with subtle loving actions that ironically resemble those of a good Mexican daughter. Julia finds the truth about Olga that further contributes to Julia’s ability to redefine herself, a Latina daughter who loves and respects her family and yet yearns for independence. The reader is left sharing Julia’s confidence that she will thrive at NYU in the fall.

Any high school senior facing college transition angst would identify with this book and find inspiration in Julia’s character. The story provides a realistic setting unique to a Mexican immigrant family. While many U.S. families consider high school graduates attending a university away from home a rite of passage, the reader learns that vision looks different for many in the Mexican culture. This text is for a mature audience as it includes profanity, sexual content and illegal drug use, however they are used in a realistic way and their absence would detract from the authenticity. This text could be paired Francisco Jiménez’s autobiographical journey from Mexico to University in Reaching Out (2009) and Taking Hold (2015); Melissa de la Cruz’s (2017) Something in Between, about Jasmine, a Filipino whose full college scholarship is jeopardized by her newly discovered undocumented status; or Frank Bruni’s (2016) non-fiction Where You Go Is Not Who You’ll Be which advocates that a wonderful college education is possible at hundreds of universities.

I Am Not Your Perfect Mexican Daughter is a New York Times bestseller, a National Book Award Finalist, and exactly the kind of book author Erika L. Sánchez wanted to read when she was an adolescent. She is the daughter of undocumented Mexican immigrants and grew up in Cicero, Illinois on the southwest side of Chicago. Sánchez’s spunky spirit is evident in her character, Julia, who also hates smelling like fried tortillas and has been dreaming of being a writer since age 12. Erika was also the sex and love advice columnist for Cosmopolitan for Latinas from 2012-2015 and her poetry collection Lessons on Expulsion was published by Graywolf in July 2017. She is currently working on a collection of personal essays.