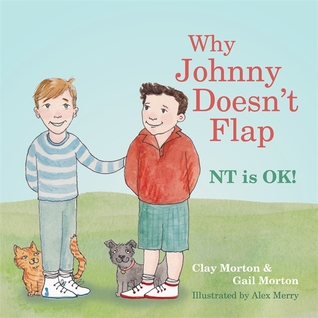 The soft and subdued colors of the sky and the delicate colors on the front cover of Why Johnny Doesn’t Flap: NT is OK! draw in readers and immediately invoke a sense of calmness. The title stands out in bright red and leaves readers wondering, “Why doesn’t Johnny flap?” The subtitle is bright green and the letters “NT” and “OK” are capitalized to accentuate meaning. NT is often used to refer to neurotypical individuals, or individuals who are not on the autism spectrum. Neurotypical individuals adapt to change easily, do not have sensory issues, or do not have dilemmas surrounding interacting with others; however, this is not a limited list (Brusie, 2017).

Why Johnny Doesn’t Flap: NT is OK! is written from the perspective of an autistic child in the United States and explains being neurotypical and autistic all in one book. It is beautiful, emotional, raw, and to the point. In the first couple of pages, Johnny is introduced as a friend who has lots of fun with the narrator who is autistic.

Contrary to many other books about autism, this one shows that it is ok to be neurotypical, not autistic, which definitely changes the narrative. For instance, in one scene, while the autistic narrator reads his book about hydraulic forklifts, Johnny climbs a tree, which an autistic child does not consider to be the norm. The narrator explains that Johnny’s brain works differently, “but that’s OK” which is the refrain that ends each scene. Another scene demonstrates that Johnny doesn’t have meltdowns when plans are changed or classes are canceled, “but that’s OK”. The narrator understands that Johnny has a different brain than he does and that is OK. Some scenes make readers giggle and laugh but still take on a serious note and educate readers about how it is ok to be neurotypical; when in actuality, the book is saying that it is ok to be autistic.

Why Johnny Doesn’t Flap: NT is OK! explains being neurotypical and autistic in simple ways so that children understand. Alex Merry’s playful watercolor pictures attract readers and invite them into the story. Possible books that might be paired with this one include Do you Want to Play: Making Friends with an Autistic Kid (Daniel Share-Strom & Naghmeh Afshinjah, 2020) and Noah Chases the Wind (Michelle Worthington & Joseph Cowman, 2015).

Clay Morton is an Associate Professor of English and the Director of the Honors Program at Middle Georgia State University. His wife, Gail Morton is a Public Services Librarian at Mercer University. Clay and Gail Morton have a child with autism and are advocates for the movement supporting neurodiversity and researching issues in that field. Alex Merry is an illustrator from Gloucestershire.

Reference
Brusie, C. (2017). All about recognizing a neurotypical. Retrieved from https://www.healthline.com/health/neurotypical.

WOW Review, Volume XIII, Issue 3 by World of Words is licensed under a Creative Commons Attribution-NonCommercial-ShareAlike 4.0 International License. Based on work by Sarah Getter at https://wowlit.org/on-line-publications/review/volume-xiii-issue-3/11/