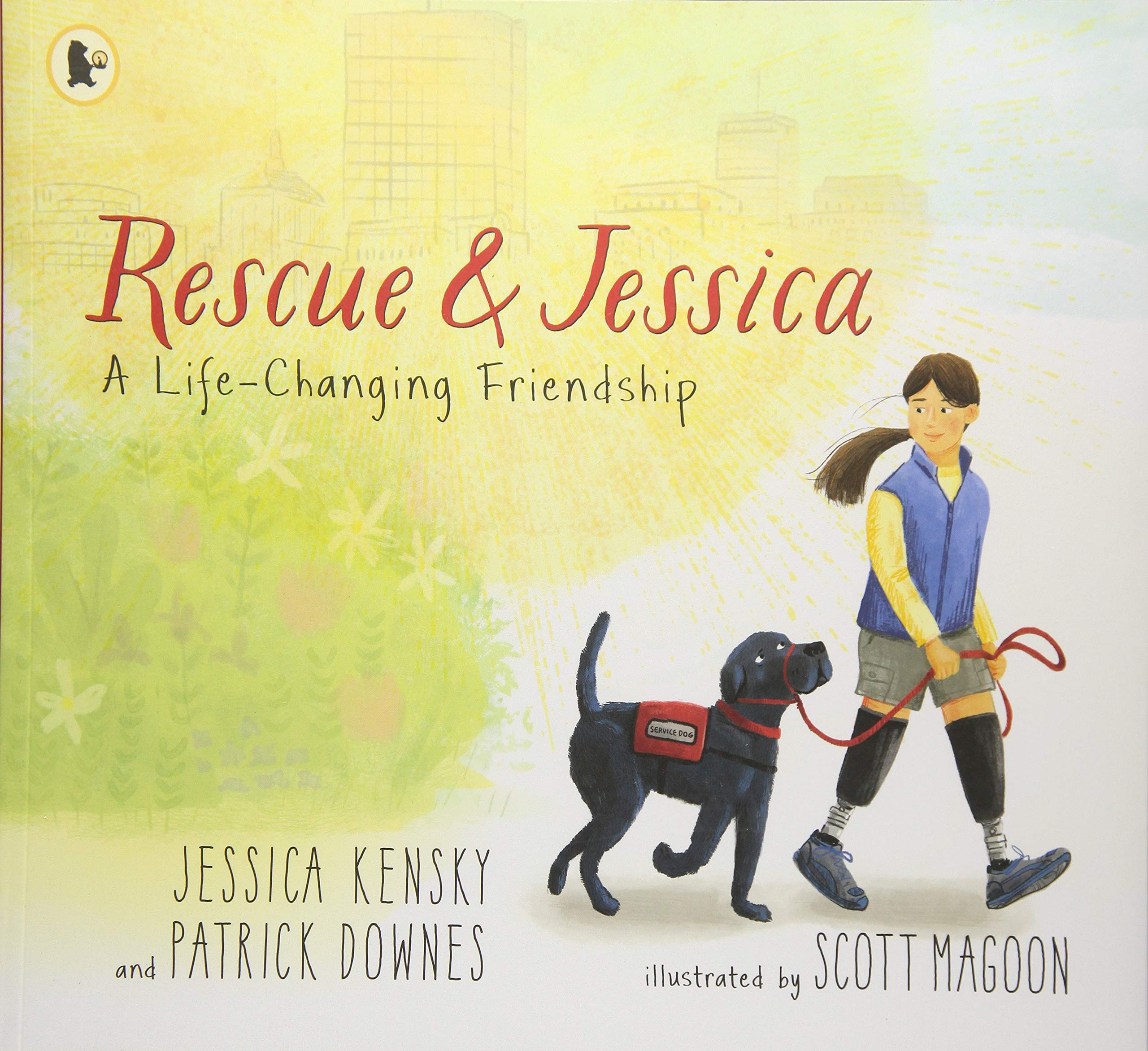 After the tragic Boston Marathon bombing, and what feels like an eternity in the hospital trying to heal after the amputation of her leg, Jessica sees another patient and her service dog and decides to apply for a dog of her own. Jessica receives Rescue, a black Labrador who is nervous about becoming a service animal because he comes from a family of Seeing Eye dogs. He was initially supposed to be trained as a Seeing Eye dog, but his trainer recognized that being part of a service dog team was a better fit for Rescue because he would work beside his partner as a team player. His trainer worked endlessly to get him ready for his new owner.

Both Rescue and Jessica are nervous about working together. Jessica needs a companion to help her do everyday tasks and is scared that nothing will compare to her old life. Rescue is unsure if he can live up to what Jessica needs. When the two meet, they are instantly connected. They start with basics like getting out of bed, learning to walk, reaching things, and getting around places, learning to work as a team to accomplish each task. Some are harder than others, but one thing is for sure, they will never give up. They work with each other every day, training, and getting used to each other’s company. Jessica does normal functioning activities on her own but needs some help from Rescue. He reaches for things, assists her when they are out in the streets, and when they go to the store. He is the perfect companion and partner for her.

Unfortunately, when healing does not go well, Jessica loses her other leg and has to learn everything again. Rescue supports her through tough times. When she wants to give up, Rescue is there for her. Each day gets easier and more accessible for them, but they still face battles. Even though Rescue is a service dog, Jessica makes an effort to let him enjoy the life of a dog. She realizes that Rescue is a dog that loves to act like one when he can, so she takes him to the dog park, plays fetch, gives him snacks, treats, cuddles him whenever she gets the chance, and lets him sleep in on occasion. He is a sweet dog who is loyal to Jessica no matter the trials they face. It is a real-life companionship of two who both need rescuing!

The alternating voices of Rescue and Jessica communicate the nervousness they both feel about this new partnership. Readers learn about Rescue first and get his perspective and feelings. We then hear Jessica’s doubts and worries. They are both extremely nervous about meeting one another, “Rescue hoped she did not notice his legs were trembling!” They both thought the other was amazing and bonded right away, which is essential because service animals are with their owners 24/7!

Authors Jessica and Patrick are a married couple who are both Boston Marathon bombing survivors and amputees. The illustrations by Scott Magoon communicate the many dark aspects of the book and provide a sense of how Jessica felt during this drastic transition in her life. Readers develop an understanding of her need for Rescue in her life. Magoon was a runner the same day the bombing happened so he understands the tragedy of that day. When he heard about their story, he felt compelled to draw the pictures realistically. Jessica wanted the art to be authentic because she wanted students to consider what it is like to lose your legs and to feel free to ask questions. When she is out with her husband and Rescue, she said it is normal for them to experience stares and questions, so they created a book that allows students to study, stare, wonder, and question in the safety of a classroom setting knowing other students might have the same wonderings.

The story is a great book to discuss disabilities and amputation. The book is just the beginning of what a real amputee person has to go through. The struggles and battles of simple tasks can feel like the world is pulling you down every day. Rescue gives Jessica a sense of comfort and freedom to feel like she can do anything she puts her mind too. This is such a powerful message, delivered in a calm way, to introduce a raw topic and give readers the understandings they need to consider differences in abilities. The message highlights that others might have differing abilities that limit what they do or that they may simply do some things differently. The book won the 2019 Schneider Family Award for the portrayal of a disability experience and the Dolly Gray Children’s Literature Award.

Rescue & Jessica can be paired with Emmanuel’s Dream: The True Story of Emmanuel Ofosu Yeboah by Laurie Ann Thompson and Sean Qualls (2015). It is a story of Emmanuel Ofosu Yeboah from Ghana, Africa, who was born with two legs, one of which did not “work.” He was viewed as a curse or useless, but he taught himself how to hop and do normal activities. He hopped two miles to and from school every day because he was determined to get an education and learned to ride a bicycle. After his mother died, he wrote to an organization, received a bike, helmet, shoes, and socks, and began to ride. He rode 400+ miles in ten days, visiting people who were sick or disabled along the way, proving he could do anything he put his mind to, even with one leg. He has a difficult life story, but the struggles he has overcome need to be told. He received a prosthetic leg and had an amazing mentor who pushed him to do great things!

Jessica Kensky was an oncology nurse and a marathon runner. Kensky is a double amputee and Rescue is not only her helper but her comforter as well. She has always been interested in fitness, running, and a healthy lifestyle. Patrick Downes, a doctoral student and marathon runner, is invested in helping people and encouraging others to do what brings them joy. They both found a passion for running in marathons. They were newlyweds when the bombing happened but were sent to separate hospitals. It was almost two and a half weeks before they were able to see each other again when Jessica was transferred to Patrick’s hospital. He felt no matter what he said, she was depressed. When she decided to move forward with Rescue, he noticed how her mood changed. Patrick has benefitted from Rescue and respects the bond they have with one another.

Scott Magoon was a runner in the marathon, on the course but between the two blasts. He sees this book as one of his most personal because of his presence at the tragedy. His wife and two young boys were also there watching their dad run. He struggled from PTSD but found relief. He used his experience and friendship with Jessica, Patrick and Rescue to create realistic artwork using digital media.