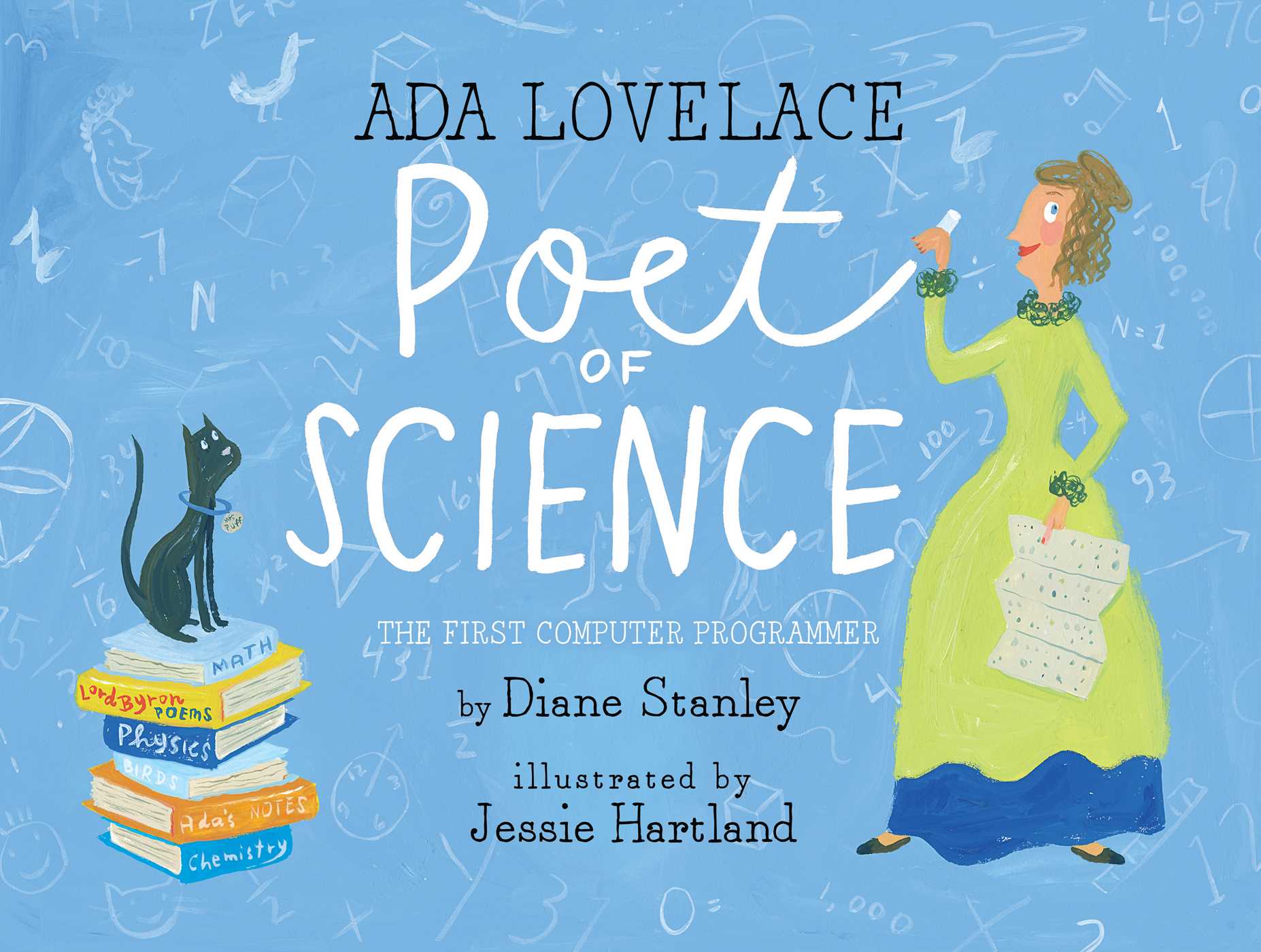 Ada is looking for something to do. Left to her own devices in a big house, her inventiveness becomes her companion as she pursues multiple interests, including learning to fly. Readers of this book quickly realize Ada’s imagination is only the tipping point of her intellect and zest for learning. The lyrical prose written by author Diane Stanley, and the winsome, cartoon-like illustrations that utilize gouache by illustrator Jessie Hartland, work together to draw readers into the true story of how Ada Lovelace’s ingenuity led her to experiment with her hobbies and surroundings in England, culminating in her work and eventual distinction as the world’s first computer programmer. Stanley begins the story focusing on Ada, her imagination, and how her scientific and mathematical interests were fostered by an early scientific education. This positioning seems intentional as readers learn about Ada’s keen intellect and mind before Stanley introduces Ada’s parents, the famed poet Lord Byron, and mathematician, Lady Byron. Ada was trailblazing in her own right as a nineteenth century wife, mother, and career woman, as well as a mathematician and scientist. This focus on her as a complex woman helps readers visualize Ada as her own individual, independent of family ties.

Ada never knew her father and was raised primarily by her mother. Lady Byron encouraged her to study math and science, even taking her to factories to see how machines operated. One notable example was when Ada saw a mechanical loom designed by Frenchman Joseph Marie Jacquard. The loom was able to weave a variety of patterns because of the use of large paper cards punched with holes; these cards were inserted into the loom providing directions for weaving. This experience provided a foundation for Ada’s eventual foray into coding. A later encounter with famed mathematician and inventor Charles Babbage provided an opportunity to see Babbage’s calculating machine, the Difference Engine. After her marriage to the Earl of Lovelace and the birth of their three children, Ada worked with Babbage on a new idea of his, the Analytical Engine. This machine could run any mathematical calculation via the insertion of punched cards representing different equations. Ada not only wrote about the potentials of the Analytical Engine—calculations, composing music, reproducing images—but also translated the symbols and rules of operation into a digital format, what we now call computer programming. Ada began the task by explaining how to translate a complicated mathematical program called the numbers of Bernoulli and code it for the machine. Unfortunately, only her initials A.A.L. were ascribed to her work because of the 19th century belief that women’s work would not be taken credibly. Even though computers would not be invented for another hundred years, Ada Lovelace is now credited with writing and publishing the very first computer program.

The book ends with an Author’s Note, Important Dates, Selected Bibliography, Glossary, and a section on Controversy to extend and support interest in the topic. Readers learn Ada died at age 36 and did not write any other documents. Babbage’s Analytical Engine was never built but Alan Turing and Howard Aiken, both revolutionary pioneers in coding and computer science, later read Ada’s manual and recognized how Ada and Babbage paved the way for their own work.

In the Controversy section Stanley explains that several scholars challenged the veracity of Ada’s authorship of the Analytical Engine manual. By using direct quotes from Babbage and describing evidence shown in letters and instructions, Stanley verifies Ada did create the algorithm and code for the computer program. In the Important Dates section, readers discover in 1977-1983 the US Department of Defense developed a software language to connect other computer languages and honored Ada by naming it after her.

Diane Stanley is the author and illustrator of more than 50 children’s books. She has become known for her biographies and her work has been recognized by the New York Times, Boston Globe-Horn Book Award, and the Washington Post’s Children’s Book Guild Nonfiction Award. Her website is dianestanley.com.

Jessie Hartland is an author and illustrator of children’s nonfiction. Her artwork extends beyond literature as she has painted murals for amusement parks and apartment houses, created window displays for department stores, worked with notable magazines, and designed jewelry. Her website is jessiehartland.com.