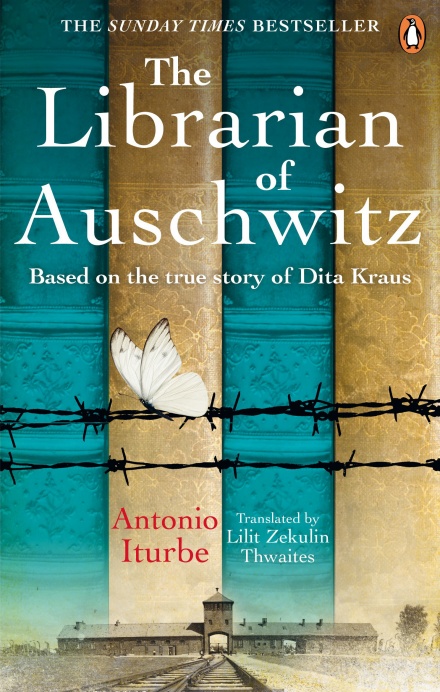 The Librarian of Auschwitz: Based on the True Story of Dita Kraus
Written by Antonio Iturbe
Translated by Lilit Thwaites
Ebury Press, 2018, 424pp
ISBN 9781529104776

Look, the people here. . .what are they? Zionists? Anti-Zionists? Atheists? Communists?” A sigh blurs his words momentarily. “And who cares? If you look more carefully, all you can see is people, nothing more. Fragile, corruptible people. Capable of the best and the worst. (p, 223)

This quote summarizes both the themes and mood of this Sydney Taylor Gold Medal Winner for older readers. Among the ubiquity of Shoah (Hebrew for Holocaust) texts, this one is special. While not technically non-fiction, The Librarian of Auschwitz is carefully and thoroughly researched biographical fiction that has been lauded by Holocaust survivors, scholars, and Jews worldwide for good reason.

The author, Antonio Iturbe, a Spanish non-Jew, wrote this novel after learning about the smallest library in the world, eight books at Auschwitz, and its adolescent librarian, Dita Kraus, who risked her life to be in charge of this minute collection. But this is just a small part of the story. Told through the stories of countless characters, including a gay sports coach, a repentant SS officer, doting mothers, lovers, and many others, this is a narrative that revolves around the idea that even in the hell of Auschwitz, people are just like the people you know in your life today.

The plot itself is concerned with the last years of the Shoah and takes place in a special camp for families where, for the time being, children are allowed to live and go to school. They play games, put on plays, and even celebrate Jewish holidays, all under the auspices of Josef Mengele. This setting allows the reader to see life being lived in the most trying of circumstances. The main character Dita, the librarian, encounters different people in her daily life, and the reader is privy to snippets of these people’s stories, too.

Infesting all of the stories is the Shoah and the reader is spared none of the horrors. However, unlike many books of this genre, the cruelty and inhumanity are supplanted, not by innocence, but by the business of living. Victims and perpetrators are neither saints nor sinners. Dita is a brave girl, but she is also rude and selfish. She is no hero; instead she is a smart teenager who is doing her best to fashion some kind of an existence as she grows up.

This novel would be best read in middle school and beyond. Because of its scope and themes, it could work well in social studies classes. The book would pair well with The Book Thief (Markus Zuzak, 2005), a story of a young girl and the books she steals that feed her soul in the stark days of 1939 Nazi Germany. In both stories the teen protagonists are protecting the power of words when words are being suppressed.

The author, Antonio Iturbe, is a novelist, a journalist, and a professor of journalism in his hometown of Barcelona, Spain. He is the author of two well-known Spanish children’s series called La Isla de Susu and Los casos del Inspector Cito.