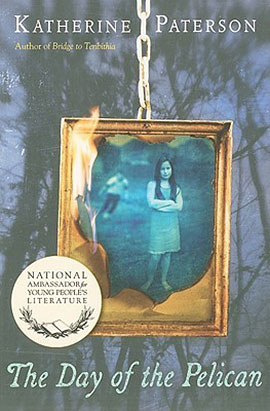 Day of the Pelican is by a renowned author, Katherine Paterson, which has the impact of migration is placed front and centre. Patterson’s book focusing on the political and religious conflicts and struggles in the Eastern European regions of Serbia and Kosovo was long over due.

The story revolves around the struggles for survival of a young girl. Meli Lleshi. She is ethnically an Albanian Muslim who is settled in Kosovo. The family of seven, are a Muslim family who stem from rural upbringing and are targeted by Kosovars and Serbians alike because of their background and their alliance to the freedom fighting group of individuals struggling for the rights of the Albanian Kosovars against Serbian oppressors known as the KLA (Kosovo Liberation Army). Meli and her brother Mehmet share the major role in this story.

The family is presented as having access to basic amenities of electricity and water as they are in the periphery of Western nations of Europe. With Mehmet being taken away the reality of their unrest is brought close to their lived experiences. The Serbs come and burn their home and take away everything of value and force them to cross the border into a Macedonian refugee camp. Interestingly they are physically left unharmed. By choosing an Albanian family as the focus of her novel the author justifies the oppression that they undergo and she does not mention what happened to Serbian and Bosnian Muslims during that horrific event in the heart of Europe. Further, by not focusing on presenting the physical torture and rape that the Muslims underwent due to ‘ethnic cleansing’ Patterson does not do justice to the actual historical events and the audience comes away with a skewed version of the actual events.

Their father finds the only way out of their impossible situation is in applying for asylum in the U.S. After they move to the U.S. they are thankful to the Christian group that sponsored them and appreciate their own hybrid existence as “free” citizens, “. In the willingness to assimilate they try to learn English, celebrate Christmas and eat ham. “for Meli the apartment lacked the welcoming feel of home” (p.106)Then the events of September 11th 2001 occur in chapter 15 which lands them again in the previous position of being labeled and profiled. The concept of family and its unity is of the utmost importance in this book as are the themes of kindness and forgiveness of oppressors even when this family goes through so much negativity of ethic prejudice and cleansing within Kosovo as well as in their new adopted country.

When it is Christians who become their saviors in the U.S. they are mistrustful and confused by the contrast in Christian behavior. The father allays their fears by saying that, “at one time all of us were Christians…until the Turks came, we Albanians were Christians…” (p. 95). The story comes through more as a representation of the many faces of Christians than a representative of diversity in Muslims living in Eastern European countries that underwent ethnic and religious cleansing because of their religious beliefs. Christians as oppressors and then as saviors again seems to cancel out the discourse that represents them as a negative religious group. Meli after 9/11 repeats twice as if in her defense, “I am not a religious person…but if I have to choose Christian or Muslim, then okay, I am Muslim”(p.127).

Of course in both of the blog 1 and 2 books all ends well and the families end up as happy and satisfied with their immigrant process and experiences.